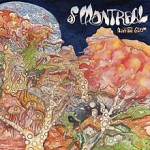 Few would have thought that of Montreal would ever turn into a minor musical institution, but that status seems to have snuck up on them by accident in the last five years. The group has been elastic in number since its 1997 debut, with leader Kevin Barnes using it as a vehicle to explore the darker corners of his own psyche and allow his fancies to take flight, set to complex yet melodic pop. 2007’s Hissing Fauna, Are You The Destroyer? was the point at which they might conceivably have crossed over into the mainstream, but some uneven subsequent records put paid to that admittedly unlikely outcome.

Their thirteenth record Aureate Gloom is more or less a continuation of 2013’s refreshing Lousy With Sylvianbriar, a record which saw Barnes largely ditch the kaleidoscopic structures and dense electronics of the band’s late-noughties output in favour of classic rock influences and (relatively) simple verse-chorus-verse songs. His lyrical themes of wild imagination intersect with self-berating introspection as per usual, in addition to the cryptic song titles, but there’s something unsettlingly safe about Aureate Gloom that probably means that it will quickly become overlooked in their back catalogue. Drowned In Sound’s Russell Warfield accurately surmises that Barnes’ failures are ones of ambition, not quality, and we’re in that kind of territory here.

The album opens with ‘Bassem Sabry’, named after the recently deceased Egyptian civil rights campaigner, and it’s a pleasing throwback to ‘00s indie-dance with a few keyboard skronks and disco handclaps thrown in. The sleazy glam of ‘Last Rites At The Jane Hotel’ and freestyle mess of ‘Monolithic Egress’ find the group in typically schizophrenic form. Barnes displays his penchant for absurd and gross imagery (what I believe is “masturbating your father’s pain” on ‘Empyrean Abbatoir’, set to chipper Peter, Bjorn & John-style indie) and menacing internal monologues (“some fucker stole what’s mine / now she’s acting like she’s his” – ‘Estocadas’). The album rumbles on like this for a pleasant but not particularly memorable forty-five minutes, showing a great deal of invention in the tracks themselves but from song to song.

The nebulous closer ‘Like Ashoka’s Inferno Of Memory’ is impossible to get a grasp of as a listener, trying to choose between resplendent indie, grimy garage and folk but not making up its mind, and this song encapsulates the problem with Aureate Gloom. of Montreal have always played fast and loose with genre, but most of their musical hybrids are imagined perfectly. The combinations here sound like Barnes hasn’t decided what he wants them to be, instead settling with simply brain-dumping them onto record.

Similar to other long-lasting indie acts such as The Fall or Sonic Youth, following of Montreal’s output is kind of like supporting a football team: you revel in the highs, put up with the lows and learn to enjoy the creamy middles. Aureate Gloom falls very much into that third category. If it was made by most other rock groups it would be hailed as a masterpiece, but because we know that Barnes is capable of reinventing himself in such spectacular fashion, making a record that’s so similar to some of his previous works feels a little disappointing in spite of the obvious talent. (6/10)