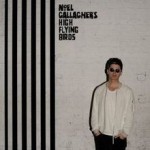 Ever since the disappointment of Oasis’ third album Be Here Now, the fall-out from which was enough to kill off an entire musical movement in one go, the genial Noel Gallagher’s career has been something of a paradox. His forthright, self-effacing interviews are invariably a lot more entertaining than the music he’s there to promote. This has been problematic for his development as an artist, since no interviewer really wants to take him to task for the tediously unambitious records he’s inflicted upon the nation post-Morning Glory, and yet it also explains his continued survival. The man is genuinely very funny – if somebody were to compile all of his interviews down the years and release the collection as a box set, it would sell a ton – and so people still regard him and his music warmly. Well, that and the continued aftershock of Oasis’ initial impact.

Chasing Yesterday is the second album by his High Flying Birds project, arriving three and a half years after 2011’s self-titled debut, a record steeped in rock history but not much invention. And lo and behold, Gallagher has been absolutely everywhere in the month leading up to the album’s release, casting his eye on the state of modern guitar music. It’s become a kind of perverse tradition since 2000’s Standing On The Shoulder Of Giants that he, or somebody close to the band’s camp, describes his new material as ‘better than / as good as Definitely Maybe’. Former Oasis engineer Mark Coyle made the bold claim this time around, adding to the NME that the new record is “seismic”. So it’s with a cynical heart that we must ask the now-rhetorical question – is it?

Of course not. Definitely Maybe was a sonic whirlwind, an irresistible force of nature, and by comparison Chasing Yesterday is a slight breeze. ‘Riverman’ picks up right where the first one left off, a languid mid-paced piece with the lightest dusting of psychedelia and even a smattering of saxophone. It sees Gallagher indulge his two favourite songwriting techniques: lifting Beatles lyrics virtually wholesale and directing them at an unnamed female with a non-specific mystical attribute. “There’s something in the way she moves me to distraction” he sings in that plaintive wail of his that never quite grabs the listener’s full attention. These kinds of lyrics are everywhere – ‘The Girl With X-Ray Eyes’, whose opening chords are reminiscent of ‘The Masterplan’, channels Bowie’s cosmic jive with basic hallucinatory lyrics like “shot from the sun like a bullet from a gun / in the morning she was gone”. Single ‘In The Heat Of The Moment’ goes “they told me you touched the face of God”; or ‘The Right Stuff’, with the couplet “are you a sleeper or a mortal soul / are you the devil with a heart of gold”. Pretty much Gallagher writing school 101, a comfort blanket for those who yearn for the days of Britpop.

Musically, Chasing Yesterday sounds rawer than its predecessor, even taking the opportunity to dip its toe into foreign waters on occasion. Perhaps this is down to Gallagher’s decision to produce the album himself, and it would seem that he’s learnt well from past Oasis producers Owen Morris and Dave Sardy. When it gets really loud, Chasing Yesterday has a satisfying buzz that hints at past glories, and this works particularly well when the backing group picks up the pace. ‘Lock All The Doors’ and ‘You Know We Can’t Go Back’ both give a nod to the punkish clatter of the glorious Definitely Maybe track ‘Bring It On Down’ and are prime fodder for use on Match Of The Day goal reels. Closing track ‘Ballad Of The Mighty I’, which features a guest spot from Johnny Marr, is even (dare I say it) krautrock-ish in its rhythm and hi-hat pattern, bolstered by a high-pitched bass guitar pattern. But by and large, the High Flying Birds don’t seek to swoop or soar, but instead maintain a low safe cruising altitude.

So to call Chasing Yesterday is “seismic” is like describing One Direction as “edgy”. More accurately, it’s a thud, sounding pretty much exactly as you’d expect it to. A couple of moments of inspiration and real quality aside, Gallagher’s execution is extremely workmanlike and not particularly joyful. It has its target market of hardcore Oasis fans, which will be more than enough to propel it to Number 1, like a kind of musical equivalent of The King’s Speech or The Best Exotic Marigold Hotel courting the grey dollar. But Chasing Yesterday’s lasting appeal is very narrow and will inspire exactly nobody to pick up an instrument and give it a go themselves. Given that Gallagher frequently bemoans the state of British guitar music in interviews, perhaps he could actually lead by example and show the youngsters how it’s done if he wants to effect real change. (5/10)