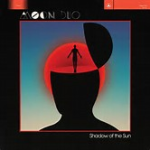 Front cover of ‘Shadow Of The Sun’

Far from being a side project to his other band Wooden Shjips, Ripley Johnson formed Moon Duo with his partner Sanae Yamada during 2009 as a means of exploring Krautrock-influenced rock, rather than his primary band’s Spiritualized / Doors-inflected explorations. Now on their fourth record, Shadow Of The Sun sees an experimental new sound treading into the electronic element of psychedelic rock. Album opener ‘Wilding’ is a throw-back to their previous records, with droning organs and driving guitar solos. ‘Night Beat’ and ‘Free The Skull’ start positively but progressively lose the build-up of momentum, which is a little disappointing. However, the two-minute burst of “Animal” perfectly complements the seven-minute hypnotic epicness of ‘Ice’.

Moon Duo’s songwriting remains as clever and intricate as ever, but the music is overly repetitive and monotonous in areas. Although this is a basic principle of krautrock-inspired guitar music, Shadow Of The Sun seems to press its point home rather too knowingly, and 2012’s Circles is a much more compelling listen compared to the new release. The first half of the record is pretty solid but unfortunately it tails off into a formulaic approach. Still, there are moments of interspersed genius throughout, with inspired guitar riffs and bursts of classic motorik psychedelia. (6/10)