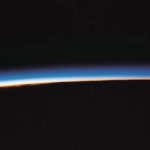 Front cover of ‘Curve Of The Earth’

Over three years have passed since Mystery Jets released their Americana-influenced Radlands which featured the excellent ‘Hale Bop’. Now onto their fifth record in the first decade of their existence, their progressive fourth has certainly influenced their King Crimson / Pink Floyd soundscape on Curve Of The Earth. Released in the same week as the passing of David Bowie, it can’t help be noticed that this record takes a leaf out of Bowie’s cosmic influence and steers towards being progressive. Recorded in an old button factory in London, Mystery Jets have evolved from their humble beginnings from the recording of 2006’s Making Dens on Eel Pie Island. Their twee origins have grown into a mature, experimental electronic sound which has developed since the release of the pop-tastic Twenty One in 2008.

Opening track and lead single ‘Telomere’ is atmospheric number which you can almost mistake for a track from Gaz Coombes’ 2015 release Matador. It’s a bold statement of intent for the remainder of the album and there is a greater sense of grandiose. This soundscape suits them and other bands couldn’t get away with it. Much of this is down to the quality of the arrangement.

‘Bubblegum’ and ‘Bombay Blue’ have a Bowie-esque cosmic nod to space and time – hence the album title.  The latter track is a particular stand-out with Blaine Harrison’s idiosyncratic vocals highlighting a sense of vulnerability; backed up by atmospheric piano-led arrangements and spiralling guitar. ‘Midnight’s Mirror’ is sonically similar to its predecessors and follows the gloomy conceptual feel. The eerie synths point towards influences from Pink Floyd, ELO and contemporary acts including Tame Impala. Harrison croons on ‘Saturnine’ over a gospel-led arrangement backed up by a Floyd-inspired guitar riff.

Whilst Curve Of The Earth is only nine tracks long, Mystery Jets have played it clever in not cramming the record with ideas – rather, each idea is worked through thoroughly. For a sound that is often done to death, the band have kept the album simplistic and have built an evolving sound that suits them well. Whilst it is very different to the early days of ‘Zoo Time’ and ‘You Can’t Fool Me Dennis’, it’s a slick record and its atmospheric concept is appropriate as the first Brit is up in space aboard the International Space Station. Every band has to evolve and this is a fine return for Mystery Jets – it will surprise the naysayers! (7/10)

Listen to Curve Of The Earth here, and tell us what you think below!