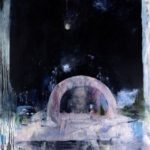 Front cover of ‘Not To Disappear’

Not To Disappear, the sophomore release by London indie-folk band Daughter, comes two and a half years after the commercially successful If You Leave, an album which saw no less than six songs used for advertisements. In Not to Disappear, the three-piece now have the problem of having to address the successes of their past while also striving to create something which shows progression – unfortunately Not To Disappear does not do this.

The album begins with the moody ‘New Ways’, a track led by the excellent vocal of Elena Tonra, brings in a theme for the rest of the album as it fails to get going for two minutes until the dark guitar line takes over. This is repeated on ‘To Belong’, where although there is an initial failing it is ignited two minutes in to great effect. But that’s not to say that every failing of the album is down to a lack of energy. ‘Numbers’ sounds like it should be used for a film soundtrack, but when the track develops for four minutes and again repeats the emphasis on Tonra’s vocal it feels repetitive. The fact that the drums attempt to create a sense of urgency (reminiscent of early single ‘Youth’) but fails to ignite feeling into the track highlights just how banal the album can be.

On the more positive side ‘Doing The Right Thing’ harks back to everything Daughter did well on their debut, as echoed production and the uncomfortably personal lyrics on dementia show just why the band were able to find such success initially. The album highlight indisputably belongs to the raw and energetic ‘No Care’; the Mogwai-meets-Ghostpoet track sees Igor Haefli deliver a manic guitar line, upon which you can almost sense the relief of Reni Aguilella as he is set free behind the drums. This new side of Daughter is a joy to see after an album and a half of similarly sultry songs and is perhaps a sign of things to come on future record releases.

Fundamentally though, you have to look past all the smoke and mirrors to see the remnants of what made Daughter work so well on If You Leave. Not To Disappear is mainly distractions of unoriginal ideas – whether it be Keaton Henson or The xx or even Daughter themselves, the album feels like a copy. The ‘difficult second album’ has proved just that, and although there is a sense of more to come, unfortunately Not to Disappear fails on too many levels to even be considered a musical success. (4/10) (John Tindale)

Listen to Not To Disappear here, and tell us what you think below!