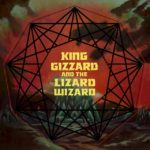 Australian psychedelic rockers King Gizzard & The Lizard Wizard don’t have an off switch. Since forming in 2010, the band have managed to release eight studio albums, four of which being in just the last two years. From their Thee Oh Sees inspired debut 12 Bar Bruise in 2012 to the jazzed-up, prog-infused tones of Oddments, King Gizzard’s rapidly expanding back catalogue lacks any predictable development. Constantly succeeding in surprising their tight and devoted fan base, King Gizzard’s latest addition to their ever-growing discography Nonagon Infinity refers back to the stripped down, psychedelic ruckus that is their 2014 masterpiece, I’m In Your Mind Fuzz.

The name references the cyclical nature of the album’s novel track arrangement. With each song mutating satisfyingly into the next, it seems we’ve finally found a use for the iTunes ‘repeat album’ button as the end of the last song transporting you effortlessly back to the beginning of the first. But while Nonagon Infinity may have finally given a use to the redundant existence of Apple’s most pointless listening feature, its achievements are far more noteworthy than that, whose qualities span a far greater distance.

The album that never ends begins by getting right in your face with first track, ‘Robot Stop’. “Loosen up / time to drop / fuck shit up / don’t forget about it” introduces the industrial thrash that characterises King Gizzard’s familiar chaotic drive. Fittingly featuring a segment of the recurring riff previously heard on tracks during I’m In Your Mind Fuzz, ‘Robot Stop’ roles into second track, ‘Big Fig Wasp’ which replicates the hectic nature of the first. The tempo retains its wings with the arrival of lead single, ‘Gamma Knife’. The music video depicts the band assembled in a bizarre satanic ritual formation and all wearing archaic robes and face paint. Perhaps their time spent with Swedish psych outfit Goat last year has begun to rub off on them.

‘Mr Beat’ is the first song that can actually be danced to. Although the foot has been lifted from the accelerator, the track’s bluesy Krautrock groove is made up by the infectious, hesitating riff and is King Gizzard’s first attempt to get feet tapping. The ferocious pandemonium returns in ‘Evil Death Roll’ and then subsides as it morphs into ‘Invisible Face’. Perhaps the most psychedelic track of the album, ‘Invisible Face’ is split into three segments. The middle making use of stereo qualities by rippling the sound in and out as it swims through a sea of blissfully lazy atmospherics. Final track, ‘Road Train’ preps the listener for a potential round two with thumping percussion and screaming distortion. The thick texture belonging to the razor sharp railway riff retains the energy that powers the album throughout and serves as the necessary hook that ensures the listeners prolonged enthusiasm can be channelled into wanting a second ride round the circle.

King Gizzard’s work ethic is certainly easy to admire, but the consistent quality of their output is even more impressive. It’s not often in the year 2016 that you come across a band who are not only able to constantly churn out record after record in astonishing short spaces of time, but also retain such a high degree of listenability whilst doing so. Although I enjoyed the acoustic direction of their last album, Paper Mâché Dream Balloon, the return of the usual psychedelic frenzy that characterises the King Gizzard sound is a welcome return indeed. (7/10)

Listen to Nonagon Infinity here, and tell us what you think below!