FROM WORST TO BEST: Ash Singles 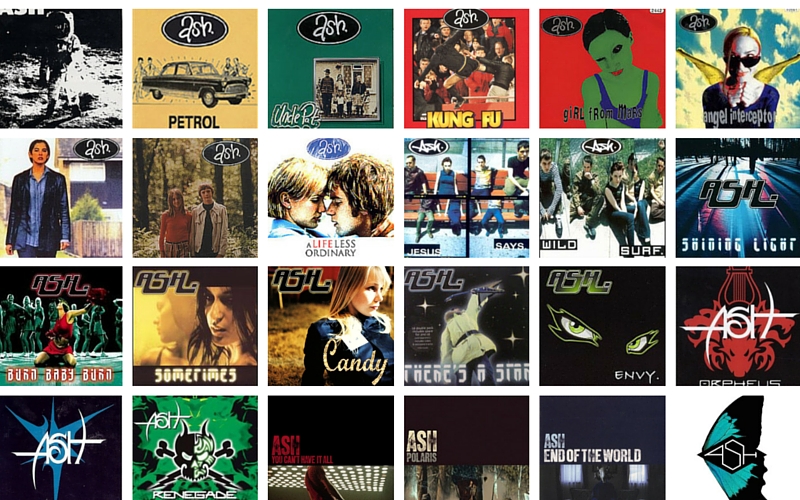 In the two decades since Ash first demolished the British charts with their debut album 1977, few can claim to have been such a quintessentially ‘singles band’ as the Northern Irish three-piece. Rock music’s perpetual adolescents, stuck in a Neverland-like mindset of endless childhood summers, first romances and house parties, their singles were the essence of teenage lust, of unrequited desire, of both shyness and youthful confidence.

When they started their career, there always seemed to be the recognition that, despite their adherence to the regular write-record-release-tour promotional cycle of albums, that chief songwriter Tim Wheeler’s real strength lay in releasing 3 minute 30 second, radio-ready pop gems, in the dying art of the great British single. The band were obviously in love with the first wave of punk groups like The Undertones, Ramones and Buzzcocks – even the title of their debut album referred to the date ‘punk broke’ and the year in which they were all born (as well as when the first Star Wars movie was released, referenced in the Tie Fighter drone that appears in its opening track ‘Lose Control’…).

Forming in 1992, at the age of just 15 with his schoolmates Mark Hamilton (bass) and Rick McMurray (drums), their 1994 mini-album Trailer showcased those influences faithfully, but even at that early stage their tracks were more than mere homage, with songs like ‘Jack Names The Planets’ and ‘Petrol’ updating the sounds for the ‘90s and a Britpop-dominated music scene that was looking to history for inspiration. By the time 1977 rolled around 18 months later, Ash undoubtedly took advantage of the hunger for British guitar groups, enjoying four UK Top 20 hits from the album as it reached the top of the charts in its first week of release.

Having toured the US with Weezer (a band more or less the American equivalent of themselves), they recruited second guitarist Charlotte Hatherley and tried to strike while the iron was hot with a quick second album. The slightly muddled but under-rated result, 1998’s Nu-Clear Sounds, was beset with problems and was nowhere near as successful as its predecessor, its singles quickly vanishing without trace. The band nearly went bankrupt the following year, but last-ditch writing sessions in Spain saw them rediscover their mojo and third album Free All Angels was a resounding commercial success in 2001, spawning another four UK Top 20 hits. Their first greatest hits collection, the brilliant Intergalactic Sonic 7”s, followed in 2002 and condensed their 18 singles thusfar – in many ways, it remains the essential Ash record to own.

2004’s Meltdown eventually followed, a solid but unexceptional effort led by the excellent single ‘Orpheus’ that showed the band was quite comfortable making accessible, radio-friendly rock, thank you very much. However, it turned out to be the final Ash album with which Hatherley was involved, as she departed to pursue a solo career after the subsequent world tour. Reverting to a trio for 2007’s rather uninspired Twilight Of The Innocents, their famous reliability in terms of musical product was becoming a creative rut for the group despite the rather lovely ‘Polaris’.

But despite a career that the band’s critics have sniffily disregarded as an attempt to re-make ‘Teenage Kicks’ over and over again, their singles have (almost) always been of an extremely high standard. Indeed, they even gave up albums altogether at one point, launching the ambitious but flawed A-Z Series project in 2009 whereby they released a single every fortnight for exactly one year, with each of the resulting 26 releases corresponding to a letter of the alphabet. It made total sense, on paper: a band renowned for their precision-crafted, direct hits of pop-punk brilliance playing to their strengths. But, after the initial flurry of press and despite a linked-in A-Z Tour, where they played gigs in lesser-known British towns from Aldershot to Zennor, the idea didn’t really catch on, and none of the tracks charted above #65.

After that, solo projects were pursued, with Wheeler teaming up with Emmy The Great for some respectable but more mainstream pop tracks, the band reunited in 2013 for some high-profile supports slots for Weezer and Smashing Pumpkins before announcing 2015’s Kablammo! via PledgeMusic. Despite approaching their forties, it showed that the band’s knack for unfiltered, adolescent pop-punk hadn’t deserted them yet.

So although it’s one of their albums celebrating a milestone, this list is about the format for which which Ash are most fondly remembered – the humble single. Nobody else seems to have approached the format with the same kind of seriousness since, with the knowledge that a great singles band is only as great as its last release. Without further ado, here are Ash’s 26 UK singles from 1994 to 2015, from worst to best.

N.B. Because they’re all of essentially the same standard and cut from identical creative cloth, this list does not include any of the ‘A-Z Series’ or its promotional single ‘Return Of White Rabbit’, and also doesn’t include download-only tracks (so no ‘Clones’), or chart-ineligible singles (no ‘Numbskull’), or non-British territory releases (and no ‘Walking Barefoot’ – although it’s insane they didn’t give that brilliant track a wider release!).