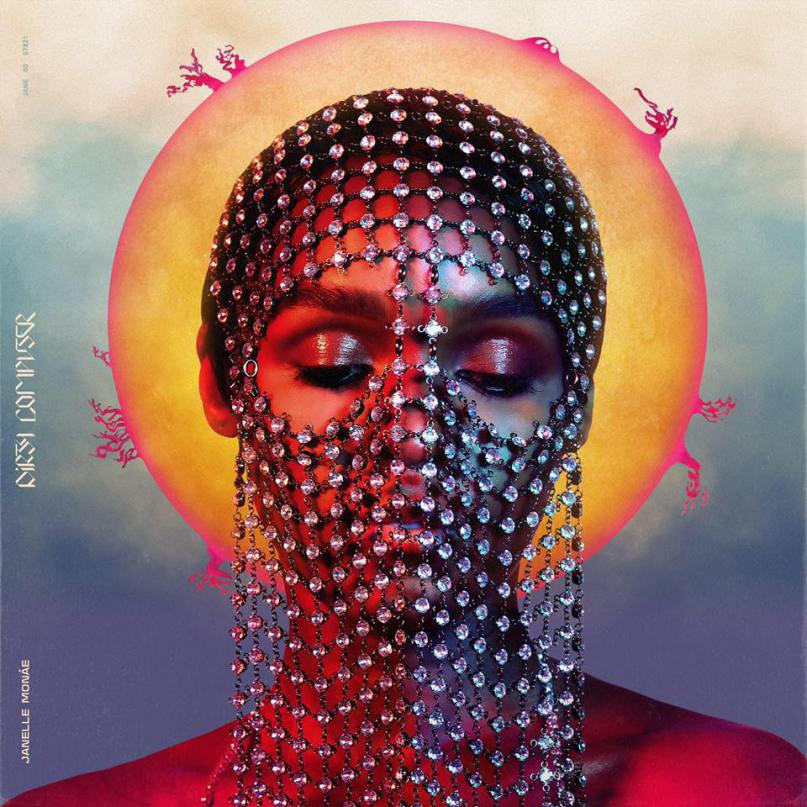 Although her pop-star image and appeal have mostly been created on the basis of being one of the quirkiest and most unconventional characters in music, Janelle Monáe has always had much more to say through her art. From the very beginning of her career she’s been focused on innovating – pushing R&B to its limits, and even trying to redefine music as it is. On her previous records, The ArchAndroid (2010) and The Electric Lady (2013), Monáe instantly proved that her ambitions were not just wishful thinking and her inventiveness was in fact one of her biggest assets.

Throughout her career, she worked with the likes of Prince, Stevie Wonder, Erykah Badu, or Solange. Today, she adds yet another stack of names to the list of collaborations, including Pharrell Williams, Grimes, and even the legendary Brian Wilson of Beach Boys. Monáe’s rich palette of influences is impressive, however, she always points out the very special relationship that she had with Prince. As she explained, throughout the process of recording Dirty Computer, posing the question “What would Prince think?” and not being able to get the answer was particularly difficult.

Nevertheless, the presence of Prince on the album is more than evident. ‘Make Me Feel’ has already been rumored to have been co-written by the late musician, yet Monáe denied that being true. What the artist cannot deny is the striking resemblance between the song and Prince’s famous ‘Kiss’, something that should probably be treated as a celebration of his music and influence that Monáe treasures so much.

Although Monáe doesn’t need to prove anything anymore, Dirty Computer has the potential to elevate her to a much higher level of stardom. Monáe’s third full-length record is everything, and more, that could have been expected from a bundle of talent and eccentricity that the Kansas-born artists represents. On Dirty Computer, Monáe is more political and more explicit than before, however, she doesn’t lose her colourful and vibrant personality along the way.

On Dirty Computer Monáe once again fuses R&B with neo-soul, funk, rock and hip-hop, something that she’s been doing successfully since her debut in 2010. However, as positive and fun as Dirty Computer may sound, the undertone of the album has a much deeper meaning. Many songs on the album refer to the ambiguous and often controversial topic of current political atmosphere in the United States, as well as the topic of female sexuality and women’s struggle for equality.

Monáe finds herself in the middle of this political conversation, bringing topics such as racism, xenophobia and sexism to the surface. ‘Crazy, Classic, Life’ begins with a spoken word, an excerpt from the Declaration of Independence, and is a strong statement song pointed at the direction of racial discrimination and violence that still exists in the US.

What makes Monáe’s perspective even more intense, is her experience being magnified by simply being a woman in America. On ‘Django Jane’, Monáe doesn’t hold back her anger and frustration, demanding the patriarchal society to finally appreciate women without any compromises: “And we gon’ start a motherfuckin’ pussy riot / Or we gon’ have to put ’em on a pussy diet […] We gave you life, we gave you birth, We gave you God, we gave you Earth / We fem the future, don’t make it worse, You want the world? Well, what’s it worth?”

A song that best represent this moment towards female liberation is ‘Pynk’. Possibly the most talked-about single from Dirty Computer, due to Monáe wearing trousers shaped like a vagina in the video of it, ‘Pynk’ is a canvas for exploration of queer sexuality and the concept of gender. Monáe also delves into different genres during the song and in the company of Grimes, jumps from electronic bits to once again, Prince-like guitar riffs in the chorus.

Monáe’s voice is heard loud and clear and while there are many serious subjects raised on this album, the overall atmosphere conveys the message of people finding common ground and love amongst each other and within ourselves. On ‘I Like That’, Monáe proclaims self-love, singing “Cause I’m crazy and I’m sexy and I’m cool / Little rough around the edges but I keep it smooth,” while also commenting on Dirty Computer in the following way: “I want young girls, young boys, non-binary, gay, straight, queer people who are having a hard time dealing with their sexuality, dealing with feeling ostracized or bullied for just being their unique selves, to know that I see you. This album is for you. Be proud.” (8/10) (Alicja Rutkowska)

Listen to Dirty Computer by Janelle Monáe here via Spotify, and tell us what you think below!