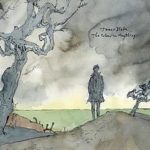 Throughout his short but dazzling career thusfar, James Blake has always come across as somebody determined to re-cast electronic music into something deep, innovative and distinctively modern. Anyone who heard his chilling, minimalist deconstruction of Feist’s ‘Limit To Your Love’ half a decade ago, a demonstration of his ability to say so much with so little, to utilise the silence in and around his skeletal music to his advantage, would testify to his strange power.

2013’s surprise Mercury Music Prize winner Overgrown refined and fleshed out the raw talent displayed in the ideas from his ground-breaking 2011 debut James Blake and his handful of visionary early EPs, all of which got shoved under the slightly alienating umbrella term of ‘post-dubstep’. To do that was to misunderstand Blake entirely, to pigeonhole him as a musical outlier indulging in specialist sub-genres when, in fact, his ideas are now beginning to infiltrate the mainstream – collaborations with the likes of Drake and Beyoncé since 2014 are testament to his increasing importance in pop.

Now, after what seems like an eternity but just a fortnight after his guest spot on Beyoncé’s Lemonade, we get third album The Colour In Anything, released modestly last Friday with a little under seven hours’ notice. Running throughout this vulnerable and deeply intimate album are themes of technology and communication, both universal and personal, bound up with matters of the heart. These are familiar themes for Blake’s output, but at a sprawling 76 minutes in length, this feels like music as therapy, and musically speaking, it’s Blake’s first proper musical blowout, a much bigger canvas which he’s let himself roam free to explore anything he wants. The results are not only consistently excellent, but extraordinarily disciplined for such a long record, something perhaps attributable to Rick Rubin’s bold co-production that renders everything slightly clearer than previous Blake records.

Blake cuts immediately to the chase with ‘Radio Silence’, a gripping portrait of the anxiety of social and romantic interaction in the 21st century, stemming from somebody not replying to a message, as Blake’s heartbroken “I can’t believe that you don’t want to see me / I don’t know how you feel”. The Colour In Anything seems to exist in this kind of state of unknowing of wondering where you stand with somebody, all the more ironic in our ever-more interconnected age of instantaneous communication.

The whirling electronic noise of ‘Points’, with its dive-bombing, distressed synth wails, talks about a change in a partner’s personality. The distinctly 21st century social dystopia of communication breakdown on ‘Put That Away And Talk To Me’ will be familiar to anybody. It’s appropriate as a shorthand for the record’s themes: Blake, though a technical maestro, is somebody who has always regarded technology as a means of more effective communication, never indulging in cutting edge music for its own sake. Blake’s lyrics are a central attraction, as he sings in blunt, revealing and almost text message-like statements of admission (“while you were away, I started loving you”); pleading (“you don’t weigh me down like you think you do”); and accusation (“you must not be trying like I’m trying”).

If the accomplishments aren’t poetic on any individual track, they are at least notable on a technical level. Blake’s familiar arsenal of weapons – wounded, Auto-Tuned vocals; sub-bass woofs; minimal, delicate piano strokes and a sensibility influenced by R&B and gospel – are deployed in more spectacular fashion than ever before. The epic ‘Two Men Down’ near the album’s end is just one of many highlights, a crumbling but paradoxically strong, rumbling beat layered in rich, sighing synths at which the listener can only marvel. ‘Always’ boasts a very strong R&B feel as Blake desperately attempts to stay in a relationship, a theme he repeats in ‘Love Me In Whatever Way’.

The trap-like percussion of ‘Timeless’, which was supposed to have featured the talents of one Kanye West until the last minute, hints at a new maximalism in his sound, as does the jazz piano and shuffling back-beat of ‘My Willing Heart’, co-written with the much-lauded and little-seen star Frank Ocean, and the piercing, cascading synths of ‘I Hope My Life (1-800 mix)’, the latter of which is possibly the most accessible thing he’s ever recorded.

Elsewhere, Blake retains his classical sparseness. Brand new single ‘I Need A Forest Fire’, featuring the similar vocal talents of Justin Vernon (i.e. Bon Iver), is positively hymn-like, based on a single, solid beat as the vocal samples shine beautifully. The exceptional lead single ‘Modern Soul’ will by now be familiar to most fans, but shows the quality of which Blake is capable even when he isn’t trying that hard. Truly, this album is an embarrassment of riches, a kind of ‘best of everything so far’.

The Colour In Anything registers as Blake’s most accomplished and accessible work to date, and given the remarkable quality of his previous two albums, that’s an impressive achievement. Some may point to its length as a weakness, but not only are there no weak moments throughout such a large record, it also feels as if editing it down would actually detract from the immersive widescreen experience of Blake’s heartache. With those two compelling albums and now this, his first indisputable masterpiece, not to mention his list of A-list collaborations that is getting longer and more impressive by the year, surely it cannot be much longer before this modest, frighteningly talented sonic pioneer gets the mainstream recognition he clearly deserves. (9/10)

Listen to The Colour In Anything here, and tell us what you think below!