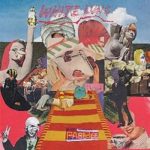 White Lung frontwoman Mish Way is fast becoming the driving force behind girl power in modern punk rock. Having been greatly influenced by ‘90s punk icon Courtney Love, Way is practically her purified artistic reincarnation, retaining Love’s wit and articulation but ditching the drama and controversy. Churning out four studio albums since White Lung’s formation in 2006, Way’s fondness for fast-paced fury has been obviously apparent from the beginning. In particular, the feminist snarl that made up 2014’s Deep Fantasy confirmed Way as one of the loudest and most important voices in today’s punk culture. Although Paradise, its eventual follow-up, still grasps the menacing aggression heard on previous records, Way reveals a slightly more subdued aspect of her usually explosive capabilities.

Beginning in textbook White Lung style, Paradise kick starts with first track, ‘Dead Weight’. The familiar wall of guitar and drums immediately smashes through the speakers in swirling frenzy of furious lyrics depicting Way’s nihilistic take on her character. Third track ‘Below’ introduces White Lung’s newly refined sound. Serving as a sort of interlude to break up the usual relentless barrage of noise, ‘Below’ begins with an unexpected shoegaze feel with the guitar riff sounding like it has been ripped straight from some sort of DIIV record. Being effectively a power ballad, White Lung demonstrate their confidence in uncharted waters. “This is my Stevie-Nicks-meets-Celine Dion ballad,” explained Way in a recent interview. “I needed to try to do a ballad about glamorous women… It’s a song about the preservation of glamour and beauty.”

‘Kiss Me When I Bleed’ returns to one of White Lung’s grit stained melodies. An exhilarating journey fusing high society and trailer parks. ‘Demented’ features lyrics depicting an unusual scene of British serial killers Fred and Rosemary West fighting over their mutually assured destruction. White Lung once again reveal their newfound strengths in dealing with slower tempos during ‘Hungry’. Although at first glance, the track’s base aesthetics are more restrained than previous tracks on the album, however Way’s sadistic commentary is as brutal as ever with screams of, “Burn the girl up, shoot from her line. / Cue the curtain, pull out your spine.” The fusion of Kenneth William’s eye watering guitar work and Way’s uncharted harsh tone of voice makes ‘Hungry’ Paradise’s centrepiece.

Three-chord punk may be long dead, but evidently its spirit is still very much alive. Way’s resilience to social oppression has certainly come on leaps and bounds throughout the last couple of years. On many occasions now, we’ve heard the capabilities of White Lung’s compact style and merciless thrash that makes up their angst-driven rampage of a career. However, Paradise proves White Lung’s ability to present fury and frustration through styles of music that differ slightly from their usual two-minute ear bombardment. (7/10)

Listen to Paradise here, and tell us what you think below!