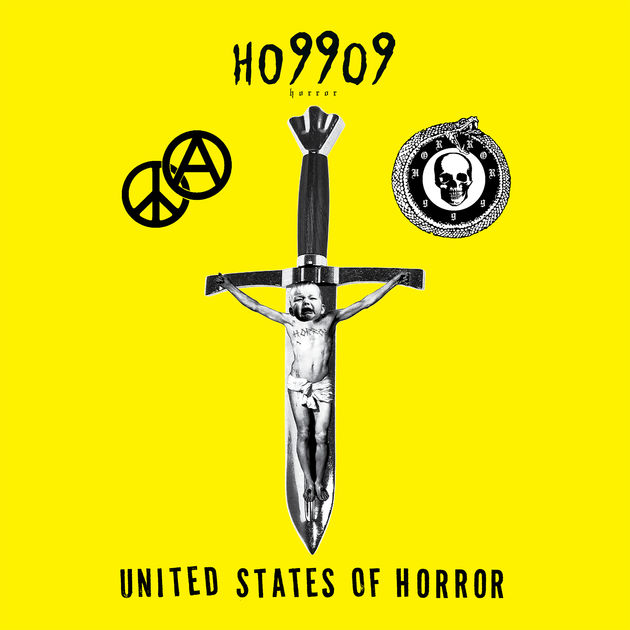 The idea that a debut album should represent the sound of a band is one which remains true 99% of the time, however, during ‘United States of Horror’s 40+ minutes, the only notion of clarity we get is that Ho99o9 are as uncommitted to one sound as they are committed to challenging the listener.

There aren’t many more interesting acts on the planet than L.A. duo Ho99o9. Here is a duo who mix explosive rap with a fetish for all things gore, all the while delivering a fresh brand of punk not too dissimilar to the likes of Black Flag.

A lot of the intrigue leading up to United States Of Horror was in which direction the twosome, known simply as theOGM and Eaddy, would take their sound. Debut EP Horrors Of 1999 was an immediate burst of excitement with just the one track lasting over two minutes, while follow-up Dead Bodies In The Lake was an attack on the senses as relentless noise-rap intertwined with a lo-fi doom metal sound.

Perhaps what is most notable about the two EPs is that Ho99o9 chose to omit their most commercial releases ‘Bone Collector’ and ‘Da Blue Nigga From Hellboy’, so it was somewhat a surprise when lead single and title-track, ‘United States Of Horror’ was released in the weeks prior to the record. Here is a single that remains true to the urgency of previous rap with a siren-like synth and a constant bouncing bass backing the typically loud delivery that Ho99o9 have perfected.

The idea that a debut album should represent the sound of a band is one which remains true 99% of the time, however, during United States Of Horror’s 40+ minutes, the only notion of clarity we get is that Ho99o9 are as uncommitted to one sound as they are committed to challenging the listener.

‘Street Rap’ is a Run The Jewels-meets-Slaves song, a constant bout of aggression that doesn’t stop for its three minutes. ‘Moneymachine’ is a sludgy doom-metal infused track that bursts into a life with hints of industrial and cynically cutting lyrics that remind the listener that at the heart of all of Ho99o9’s music is punk.

This is punk done differently to anything that has preceded. Comparisons to Death Grips are obvious, but they are made redundant during some of the record’s less electronic based moments. ‘Feels Like Interlude’ is a perfect example of a band that has yet to define their sound; the track only lasts 85 seconds yet remains a standout on the record due to its calming Gold Panda-styled IDM.

Still, the record’s experimentation does see the duo miss the mark on occasion with ‘Hydrolics’ proving a step too far with its Schoolboy Q-influenced sound showing that the band’s explosive experimentalism isn’t quite the finished article just yet.

United States Of Horror is everything we should have expected as a listener, yet completely different. The album challenges us at every opportunity, yet it does so in ways we could not have expected prior to its release. The album attempts to cover every genre of the last 30 years, from nu-rave to metal, from punk to hip-hop, yet it all makes sense over the course of the record. Ho99o9 may not have indicated any sense of direction during their debut LP, but if anything it is this lack of inhibition which makes the record a joy to behold – where they go from here is anyone’s guess, long may it continue! (7/10) (John Tindale)

Listen to United States Of Horror here on Spotify, and tell us what you think below!