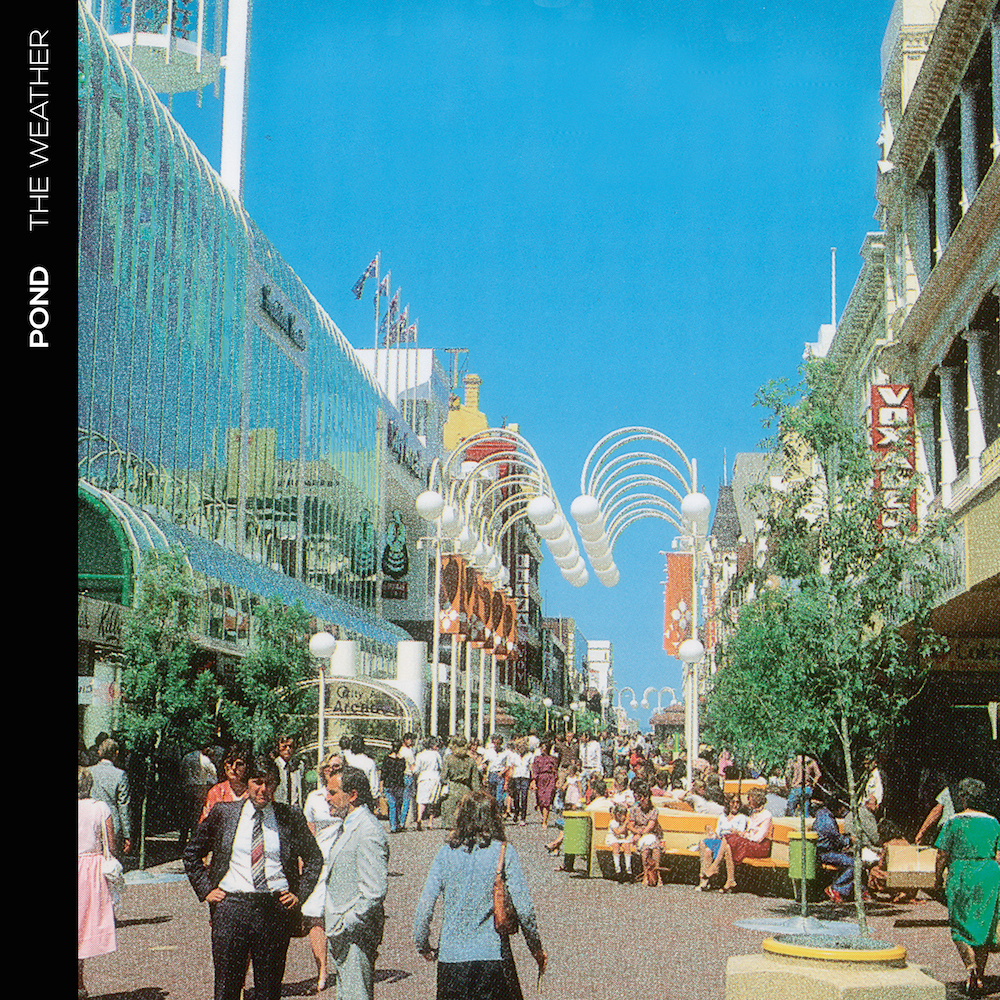 Pond’s seventh studio album ‘The Weather’ sees them change gears slightly, moving in a slightly more synthesised direction like their friends Tame Impala did with ‘Currents’.

It’s easy to palm off Pond as some sort of Tame Impala offshoot, but they’ve always deserved more than that. Sure, a lot of Pond’s music sounds as if it’s been ripped straight from a Kevin Parker vision, but considering the close relationship between them, it would be foolish to assume each’s total isolation from one another. The interchangeable personnel they share hasn’t exactly been an easy thing to follow. For five years, Pond’s frontman, Nick Allbrook was on the road with Tame Impala as a touring member. Kevin Parker has since returned the favour by taking up the role of Pond’s in house producer for their last four albums as well as feature on their breakout record, Beard, Wives, Denim in 2012.

The only thing dividing the two is Tame Impala’s rise to stardom. There’s no doubt about it, they’re the bigger and more accomplished band, but that’s not to say their ascent hasn’t played to Pond’s advantage. How many people do you think were aware of Pond before they heard Tame Impala? I can’t say I’d know many. Now with more of the world’s eyes on them than ever, it’s no surprise that Pond’s seventh album The Weather follows a similar vein to Tame Impala’s 2015 masterpiece Currents. Though the similarities are still overtly apparent, Pond make it their own in what is one of their most polished album’s to date.

What separates the two is Pond’s energy. Whereas Kevin Parker has always tended to float through psychedelia in a state of collected serenity, Pond’s outlandish spirit is unparalleled as an artist. The Weather appears to tangle these two aspects, bringing light to both neighbouring styles. It’s impossible to ignore the inspiration of Currents in the production to the point where the sound and style of the synths are practically identical. However, Pond mange to deliver their own charms. ‘Sweep Me Off My Feet’s’ chiming melody rests above retro-soaked synth patterns and ‘Paint Me Silver’ offers a vice-like hook that’s impossible not to sink your teeth into.

’30,000 Megatons’ brings elements of soulful depth to Pond’s often fuzzy psychedelia as they experiment with a far slower pace. Elsewhere, Pond split tracks into two respective parts. ‘A/B’, a track name that implies segregation from the off, powers into the sort of psychedelic clatter that might easily be found on the next King Gizzard & The Wizard Lizard record before oozing into a blissful piano lament about angels.

The Weather isn’t perfect, far from it, but you can’t take Pond away from its moments of potency. What’s certain is Pond’s ascending position in psychedelia’s wave of reinvigorated application in modern music. There’s an appeal for bands like Pond and despite it taking seven albums to get here, never before have they been so sought after. Their path of upwards trajectory is mirrored by a string of upcoming major festival appearances and The Weather will be a strong asset to their set list. (7/10) (Ollie Rankine)

Listen to The Weather here via Spotify, and tell us what you think below!