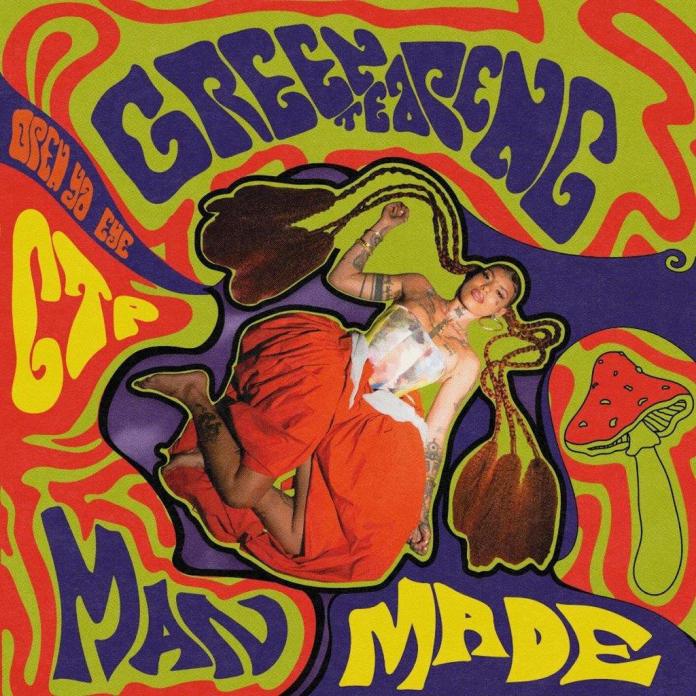 Aria Wells’ first full-length Greentea Peng album ‘MAN MADE’ lives up to the hype, a refreshing blend of psychedelic R&B cut with dub and reggae influences.

For a debut album, Greentea Peng’s MAN MADE has had an enormous amount of hype attached to it. Aria Wells has been in the NME, praised by the BBC and even appeared on campaigns for Adidas. She strikes you as a superstar immediately, and that’s before you’ve even started her debut album. 2019’s EP Rising, in particular, alerted us to her talents. With a feature spot on The Streets’ latest mixtape, Greentea Peng shot to stardom, and deservedly so, with her own brand of psychedelic R&B, with clear dub and reggae influences. However, Peng’s sound is not a product of the past – it feels like she’s taking these styles and making something completely and utterly new.

What makes it even more exciting is that MAN MADE isn’t a rushed, half-arsed effort like too many anticipated debuts are. At just over an hour and with 18 tracks, including a seven-minute epic, Peng’s style is not bowing down and creating pop music so she gets on the charts. She’s creating music from the future – the present just needs time to catch up.

London, probably more than anything else, plays a huge role on the album’s sound. It’s as diverse and multi-cultural as a walk down a busy South London street. Alongside dub rhythms and pan flutes, Peng’s delivery is about as London as you can get. It’s chilled, laid-back, but carries a sense of confidence that you’d struggle to find on most debuts. There is nothing that is done for the sake of sounding interesting, it all has a place, and flows with such expertise.

In fact, playing this album on anything other than a car stereo seems to do it an injustice. These songs feel as though they were crafted specifically to be played on long car journeys with friends. The first three tracks bounce around with such a heavy bass, but feel so feel good. There is little that is introspective in the first half of the album, but oddly enough, this feels welcoming right now (apart from maybe ‘Nah It Ain’t The Same’, which comes to the conclusion that being a human is hard work, which feels so good to hear, especially during the pandemic). The second half feels much more personal, filled with songs as romantic as love letters, alongside gorgeous, intricate instrumentals (take the incredible ‘Maya’ as a prime example).

There are a few interludes (and even a skit, which is basically an interlude but with a slightly edgier lyrical theme, being an all-out attack on the rich) on the album, which add to the soundscapes and vibe of the project without sounding like fully developed track ideas. ‘Party Hard Interlude’ is enjoyable, with repeated requests to “eat some shrooms” but the track fails to really go anywhere and eventually just fades out. Again, this isn’t a problem, as it’s labelled as an interlude, but it does feel as though this could be taken out and it would make little change to the overall album.

Peng’s use of actual instrumentation may seem like something that would give MAN MADE a throwback feel and it does to an extent, but it also makes everything sound remarkably fresh. ‘Earnest’, for example, features an instrumental that feels like it was ripped directly from Odd Future, but the use of drums (and a delicious hint of electric guitar) gives the track an otherworldly coolness. There is nothing that sounds boring, even though the vibe is extremely laid back.

In terms of personal tracks, ‘Suffer’ feels like one of her most honest. With an acoustic guitar and sparse keys, as well as a driving drumbeat, Peng creates one of the best hooks heard in R&B for a while, with repeated “I suffer, you suffer, I suffer”. It may sound like it would get annoying, but Peng’s style is so likable that after only a few tracks, you feel as though you’ve completely adjusted to her vocal style and her use of repetition to drive home a lyric or idea.

However good these sounds are, there is sometimes very little to differentiate between tracks. This adds to a sense of cohesion across the album, but it can be quite difficult to listen to some of these tracks outside the album context. It does work in Peng’s favour, but unless you have a spare hour to really delve into Peng’s music, a small dose may not cut it. ‘Kali V2’ is one of the album’s standout moments, with repeated mentions of suffering and exhortations to rise up against injustice. The beat is inspiring, with rising piano chords and a gentle fade in of brass instruments.

However, all this leads up to one of the most entrancing tracks of the year. The soft, hypnotising ‘Meditation’, with a looped rhythm and simple lyrics is built to make the listener feel as though they are meditating and creates a gorgeous soundscape for them to do so. It is one of my favourite listening experiences of the year, and a perfect listen if you’ve had a long day and want to relax. More than most artists right now, Greentea Peng feels extremely essential, and MAN MADE is a brilliant, inspiring listening experience. She’s certainly got an incredible future in this industry. (8/10) (Harrison Kirby)

Listen to MAN MADE by Greentea Peng here via Spotify, and tell us what you think below!