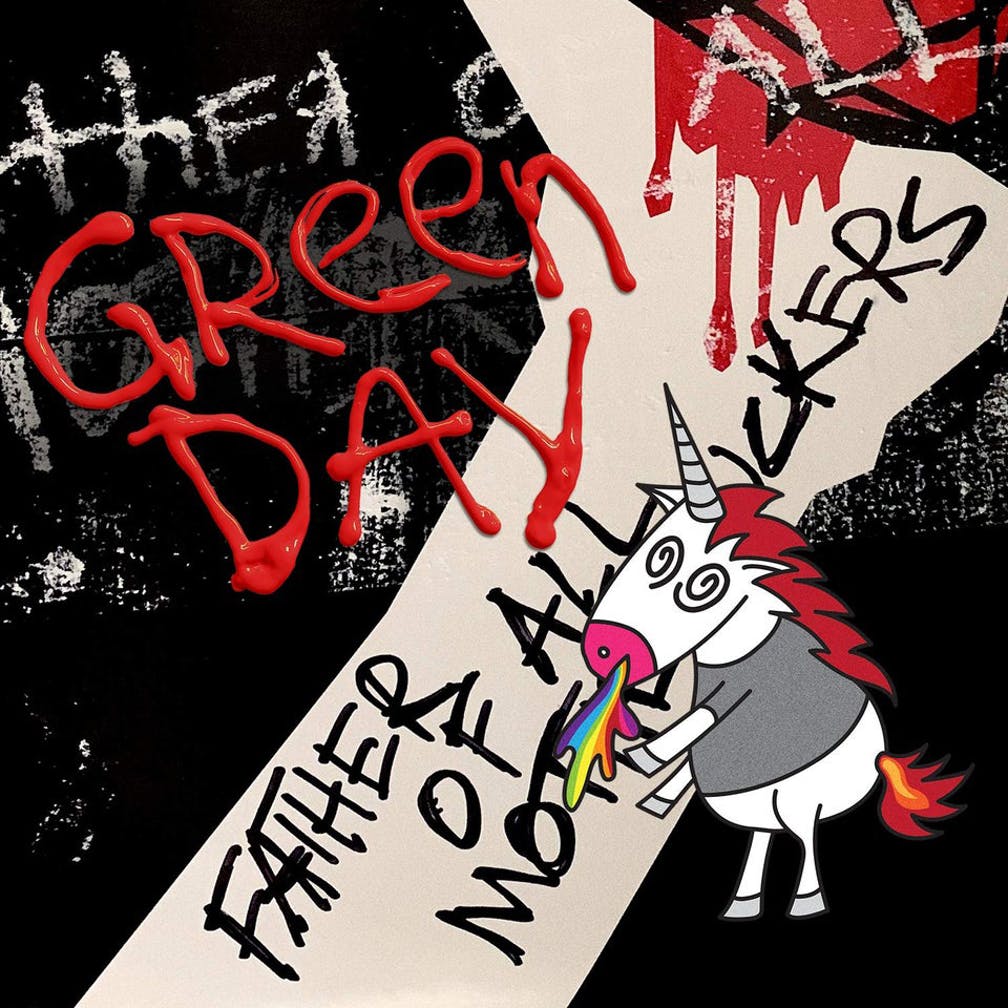 Father Of All… is Green Day’s 13th studio album, and is selling itself as a return to basics, as it’s also their shortest, with a running time of just over 26 minutes. However, they fill those minutes with songs with of all the anthemic energy that you’d expect of Green Day. According to Billie Joe Armstrong, Father Of All is about “the life and death of a party” and “not giving a fuck”.

That last sentiment is especially clear in the early part of the album, when there are times where you have to ask yourself if you’re actually listening to Green Day. The title track of the album ‘Father Of All…’ feels like a Black Keys take on waking up the morning after a party “I woke up to a message of love / Choking up on the smoke from above / I’m obsessed with the poison and us / What a mess? Because there’s no-one to trust”. ‘Fire, Ready, Aim’ definitely sounds like it was inspired by the Hives. Perhaps the most interesting example of this is ‘Stab You In The Heart’ whose chorus sounds like it came straight from the Grease soundtrack.

There are political statements threaded throughout the album, but it doesn’t force down your throat, almost like the album is designed to help you escape from the world rather than rabble-rouse or start a conversation on the state of it. Some of the most political material can be found on ‘Junkies On A High’ with lyrics such as “Drink it in, dumb it down, suck it up” and “I’m not a soldier, this ain’t no new world order”. There was definitely some expectation that Father Of All was going to be American Idiot Mk. 2 given the political climate, especially in America, but Green Day have subverted that, just as they always have done.

There are shades of the old Green Day in Father Of All… as well, ‘I Was A Teenage Teenager’ definitely has parts where you think you’re listening to American Idiot-era Green Day with its reflections on youth and puberty. ‘Sugar Youth’ has a similar vibe. But these are the exceptions, rather than the rule.

Father Of All… is not an album that it takes time to get. It’s all out there, there’s no messing around and its sense of spontaneity works in its favour, unlike the forced nature of their Uno! Dos! Tres! series some years back. It’s the work of a band not feeling any pressure and just having a really good time and that’s how you feel listening to it. (7/10) (David Allsop)

Listen to Father Of All… by Green Day here via Spotify, and tell us what you think below!