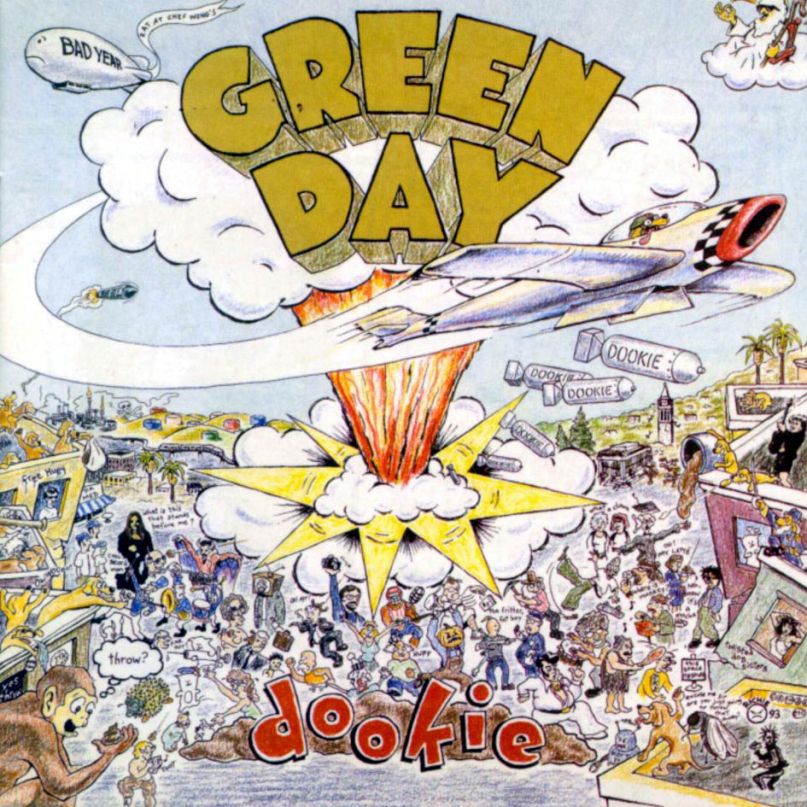 Since beginning their career in 1986, Green Day are one of the most revered Californian punk bands to have ever existed. Moreover, their line-up of Billie Joe Armstrong (guitar and vocals), Mike Dirnt (bass) and Tre Cool (drums) remains just as unlikely to alter as before. Alongside their contemporaries, including Rancid, The Offspring and Bad Religion, they changed of face of punk by incorporating musical sensibilities attributed to pop which, in turn, led to the mainstream success of the pop-punk sub-genre in the mid-Nineties. Green Day’s third, and arguably best, studio album Dookie played a fundamental role in the genre’s conception. But it took a while for anyone to take any notice of this new iteration of punk.

It goes without saying that without the likes of Ramones, Buzzcocks, Descendents or The Clash, Green Day would have never formed in the first place. Crucially, the first wave of punk groups that emerged from the late Seventies was the first stepping stone. But punk rock at that time, by its very nature, was not a mainstream genre which will become an important point later. The band’s first two records 39/Smoothand Kerplunk!saw the band wearing their influences on their sleeves with hardly any delineating qualities. Having said that, there were a handful of fun and vibrant tracks to sink one’s teeth into like ‘At The Library’, ‘Christie Road’, ‘Welcome To Paradise’ and ‘2000 Light Years Away’.

39/Smooth would be the only Green Day LP to feature John Kiffmeyer on drums, before handing the sticks over to Tre Cool, and Kerplunk! would go on to become one of the most successful albums released through an independent label, Lookout! Records in this case, selling over four million copies. For context, Lookout! was also famous for having released Operation Ivy’s one and only studio album Energy, which sustained an ardent cult following after the band’s demise and, consequently, heavily influencing Green Day and multiple other bands within the East Bay area of San Francisco. Operation Ivy members Tim Armstrong and Matt Freeman would go on to form Rancid two years later.

After transitioning from Lookout! Records to the major label Reprise Records, after catching the attention of producer Rob Cavallo, proceedings only got better for Green Day. Unfortunately, the band received a bit of a backlash from the independent punk scene at the DIY 924 Gilman Street Club in Berkeley from which they originated, being accused of selling-out and no longer worthy of being labelled a punk rock band. It wasn’t until the release of Dookie in 1994 that punk rock truly became a mainstream genre and MTV sensation for the first time. 25 years on, it still scans as a genre-defining moment whose youthful energy remains timeless.

Dookie is the ideal album for those who feel like outcasts from general society, with topics ranging from depression, nihilism, sexuality and abusive relationships. These angst-ridden feelings are personified indefinitely by Armstrong’s vocals, giving the listener a sense of experience, as though he, as well as Dirnt and Cool, also feel like outcasts and that they have been through similar situations on multiple occasions. When observing the album artwork, the planes flying around; the falling missiles; crowd hysteria and massive explosion all signified that Dookie was always going to be an album of chaos.

The feeling of apathy fuels the fire on the rigorous opening track ‘Burnout’ with “Apathy has rained on me / Now I’m feeling like a soggy dream / So close to drowning, but I don’t mind / I’ve lived inside this mental cave” which is juxtaposed by the fast-paced nature of the song. It sets the entirety of the record up masterfully. The follow-up tracks ‘Having A Blast’ and ‘Chump’ follow similar leads in terms of angst.

‘Having A Blast’ pinpoints the moment of emotional breakdown through the metaphor of someone with explosives wrapped around them (“I’m taking you all down with me / Explosives duct-taped to my spine”). ‘Chump’ is about the unconditional hatred of the protagonist’s former lover’s new boyfriend, despite never meeting him. The protagonist claims that the boyfriend is the source of his unhappiness which is outlined in the first verse: “I don’t know you, but I think I hate you / You’re the reason for my misery / Strange how you’ve become my biggest enemy / And I’ve never even seen your face”. This track also foreshadows the catchy basslines from Dirnt on ‘Welcome To Paradise’, ‘Longview’ and ‘She’, most notably.

The production and recording of ‘Welcome To Paradise’, re-recorded from Kerplunk!, has been superbly executed this time round. The iconic opening power chord sequence is a glorifying noise to pop punk fans ad infinitum. But what keeps people coming back is the combination of Dirnt’s bass and Armstrong’s guitar building up a detonating crescendo for its bridge. The chorus paints a crime-ridden image of Oakland, California through the lens of Armstrong’s experience when he grew up there: “Pay attention to the cracked streets and the broken homes”.

‘Longview’ begins with one of rock music’s most recognisable basslines. The way the notes are coordinated is delightfully unusual and idiosyncratic, probably linked to the LSD Dirnt was taking when he wrote the bassline. The lyrical content visualises those days of doing absolutely nothing of any significance except smoking, watching TV and the solitary vice. The line “I locked the door to my own cell and I lost the key” emphasises how the protagonist cannot break out of, what has presumably become, a vicious cycle of being a couch potato. It’s not hard to see why Nineties youth resonated open-endedly with this track.

As underrated Green Day songs go, ‘Pulling Teeth’ is one that deserves a lot more credit. The song uses dark comedy effectively to describe an abusive relationship whereby the girlfriend is the perpetrator. “Is she ultra-violent? / Is she disturbed? / I better tell her that I love her / Before she does it all over again / Oh god, she’s killing me!” cries Armstrong in the chorus, evoking a sense of urgent desperation. Although, not written in the all-guns-blazing style that Green Day tend to opt for, the slower tempo and nimble guitar riffage does provide the song with its unique traits.

Dookie’s energy is also propped up by less well-known smaller cuts like ‘Coming Clean’, harking back to when Armstrong came out as bisexual in his teenage years, ‘Emenius Sleepus’ and ‘She’. This is contrasted by ‘When I Come Around’ with its enticingly leisurely guitar riff that will never fail to make any crowd of pop punk fans jump up and down with glee.

Then we come onto what most Green Day fans would consider to be the greatest track on Dookie. Spending five weeks at the top of the Billboard’s Alternative Songs chart, as well as rewarding the band with a Grammy Award, ‘Basket Case’ was the unmistaken catalyst for punk rock’s shift into the mainstream. The music video, filmed at the mental institution Agnews Developmental Centre, also became a staple, being nominated for a whopping nine MTV Video Awards……yet, absurdly, not winning in any category. No matter, the song’s infallibility was remarkable in every sense of the word.

This signature track has all the right ingredients needed for an all-out punk song: biting power chord riffs, mind-blowingly quick drum fills and a concentrated bass tone to keep the song intact. ‘Basket Case’ is also one of Armstrong’s most personal accounts where he discusses his dealings with social anxiety and paranoia, articulated well by “Do you have the time to listen to me whine? / About nothing and everything all at once”.

Dookie may have given Green Day the thrill of success, but their subsequent three albums Insomniac, Nimrod and Warning never quite achieved the same levels of hegemony, as they attempted to turn the same tricks again, then branch out into mellower territory, but ended up losing their way. They would have to wait an entire decade before they found their direction again with the release of the concept album American Idiot; revealing to the world that not only were they thundering adversaries of the Bush administration at the time, but they also displayed their newfound ambition with ‘Jesus Of Suburbia’ and ‘Homecoming’, clocking in at over nine minutes each. Then they released 21st Century Breakdown five years later, which was just as politically-charged and turbulent as American Idiot. Ever since, the bloated Uno!, Dos!, Tre! trilogy and the very middle-of-the-road Revolution Radio have all received nothing but lukewarm reception from fans.

It’s fair to conclude that Dookie rewrote the rulebook for punk rock and represented one of two career highs in Green Day’s catalogue. It stands alongside Rancid’s …And Out Came The Wolves, Blink-182’s Cheshire Cat and The Offspring’s Smash; all responsible for rejuvenating punk in the mid-nineties. Think of any modern pop punk band, whether it be New Found Glory, Fall Out Boy, All-American Rejects or Good Charlotte, it’s more likely than not that they have taken several cues from, or have been, in one way or another, inspired by Dookie.

Listen to Dookie by Green Day here via Spotify, and tell us what you think below!