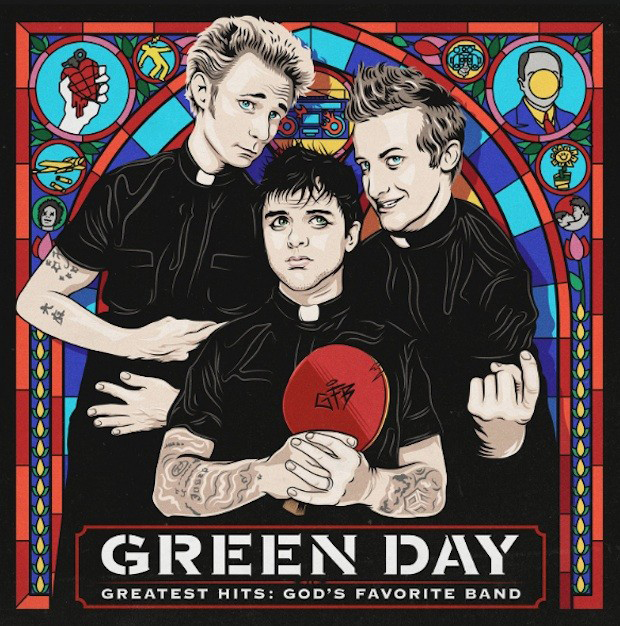 It’s hard to contemplate that Green Day have been active for just over three decades. Now, with a dozen studio albums to their name – last year’s Revolution Radio being the latest instalment – the band have released their second proper compilation album: Greatest Hits: God’s Favorite Band – 16 years after International Superhits! The reason I say ‘proper’ is because releases like 2002’s Shenanigans and 2014’s Demolicious are considered ‘compilation’ albums by the group’s Wikipedia discography, but are really just collections of previously unreleased demos and recordings.

Having said that 12 studio albums now make up their catalogue, as well as one of the most dedicated fanbases on the planet, it was inevitably going to be interesting to see what tracks made it onto the track-listing here, and which had to be omitted. The question is: would God’s Favorite Band be worth buying for a friend or family member as a Green Day induction process?

Well, no! One may as well just send them straight to Dookie or American Idiot first because that’s what Green Day are basically telling potential listeners to do. Five tracks from Dookie (including ‘Basket Case’ and ‘Longview’) along with four from American Idiot (including the infamous title track and ‘Boulevard Of Broken Dreams’) assemble nearly half of the compilation. The opening track ‘2000 Years Light Away’ from Kerplunk is a lovely curation of one of Green Day’s most underrated gems.

The fact of the matter is, if Green Day were to present their best tracks from every album, the listener would be subjected to at least forty tracks or so. Trying to cut it down to just over 20 tracks is a tough ordeal. But after saying this, there are a few changes that can be made to this compilation. Despite its undeniable prowess, ‘She’ is the weakest track out of the Dookie cohort and should have been removed. In addition, The Insomniac / Nimrod era of the mid-Nineties is too under-represented. If Green Day insist on having just one track from Insomniac, why did they not choose ‘Geek Stink Breath’ over ‘Brain Stew’? – its miles better! For Nimrod, ‘Redundant’ or even ‘King For A Day’ would both make viable candidates to replace ‘She.’

The 21st Century Breakdown album is justly characterised with classic hits ‘Know Your Enemy’ and ’21 Guns,’ but ‘Eat Jesus Nowhere,’ arguably, was screaming for a place. Although 2012’s Uno! / Dos! / Tre! collection had a myriad of blunders, ‘Oh Love’ is not the only decent track from these LPs. ‘Stop When The Red Lights Flash,’ ‘Kill The DJ’ and the heavily unacknowledged ‘Dirty Rotten Bastards’ are all worthy contenders. Apart from ‘Still Breathing,’ every other track from Revolution Radio falls too short. ‘Bang Bang’ is a killer track in own right but it does not feel like a Green Day greatest hit. ‘Ordinary World,’ this time featuring country artist Miranda Lambert, in spite of its charming guitar melodies, is still just as lyrically dull and lacklustre as before. Last but not least, the previously unreleased ‘Back In The USA’ sees Billie Joe Armstrong criticising the current state of affairs in America with spark and flare.

In terms of commercial clout and reputation, Green Day were right to set their focus on Dookie and American Idiot for God’s Favorite Band. Regrettably, there are some questionable song choices. Don’t get me wrong, none of the songs are not bad, per se, but the other supplementary options mentioned throughout this review would have been more justifiable and made the track-listing much more exhaustive. (6/10) (Harry Beynon)

Listen to Greatest Hits: God’s Favorite Band by Green Day here via Spotify, and tell us what you think below!