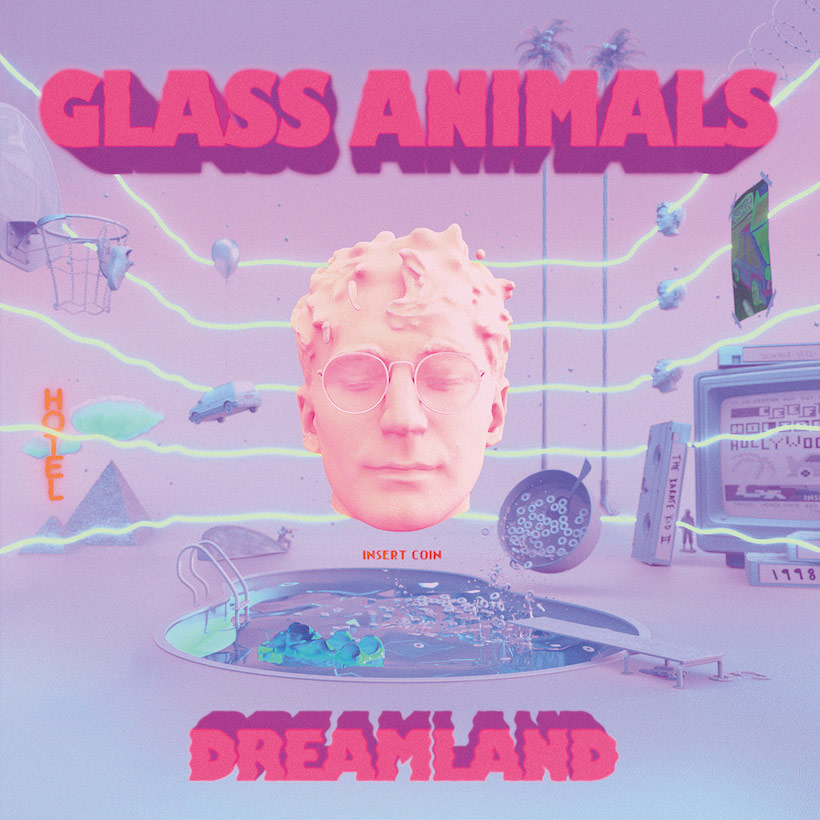 For every win on Glass Animals’ eclectic third album ‘Dreamland’, there’s another moment of excruciating cringe.

The new Glass Animals album is here, and once again the Oxford lads are providing us with colourful grooves and an aesthetic sensibility so thorough it’s hard not to at least appreciate it from afar. Dreamland, however, seems to see the band embracing a very hip-hop and trap influenced production style, alongside their already apparent indie-pop and dance music influences, for mixed results.

Lead singer and songwriter Dave Bayley has never been one for disclosing his deeply personal issues or drama in his songs. The lyrics of the band usually always centring around other people’s stories and insights into the Other rather than into oneself. What makes Dreamland stand out from their previous efforts, then, is its unabashedly personal nature. The whole album consists of Bayley reckoning with his past memories, interspersed with vignettes of his home movies. It makes sense considering the last couple of years the band have had, mainly their drummer Joe Seaward suffering a near-fatal accident and having to undergo surgery, in the end somehow making a miraculous recovery. “In a time like that, all you can seem to do is start thinking about the past” said the frontman in an interview with the Independent.

The emotional trajectory of the record is apparent right from the titular opener. The track introduces the listener to just how meta-textual this record will get. It literally sets the story for how the album came into conceptual being, with the outro lines being “You float in the pool where the soundtrack is canned / You go ask your questions like, ‘What makes a man?’ / Oh, it’s 2020, so it’s time to change that / So you go make an album and call it Dreamland”.

As always, Bayley shows his enviable sense for an impactful vocal melody. While the rest of the vocals are buried in effects such that they’re pretty barely distinguishable (a feature that seems to run through the album, landing, depending on preference, anywhere between mellow and incredibly obnoxious), the second verse cuts through and nearly reaches the same level of emotional affectation as ‘Agnes’, the fan-favourite closer to their sophomore record. The lyrics talk of a longing for something real and genuine, grasping for those seemingly random childhood and teenage year memories that nestled themselves into your brain to forever represent something pure and naïve.

The aesthetics of Dreamland are very clearly pulling from vaporwave, in an inception-like nostalgia for the early 2010s being nostalgic for the Eighties. From the cover art and loads of the merch associated with the album including those surrealist vaporwave 3D head-models, to the (actually ingenious) Windows 98 re-style of the band’s website, to the varying shades of pink and purple permeating the entire colour palette, to the production being so crammed full of reverberation effects that the general vibe seems to go in and out of what might be considered a perfect fit for those “vaporwave chill lounge anime girl 2012” playlists you find on a particular side of YouTube.

In true vaporwave fashion, the record’s lyrics are chock full of references, that, depending on how they’re placed, are either a nice little addition to the intensely image-centric and evocative lyricism that’s typical for the band, or cringe. There’s Pokémon, Scooby-Doo, various video game franchises, the list just keeps going. The track ‘Tangerine’, which feels like someone made an excessively mediocre attempt at a mash-up between ‘The Look’ by Metronomy and ‘Hotline Bling’, is a perfect example of some of the more cringe lines in the song: “As cold as an old ice cream sandwich, as focused as Mr. Miyagi”. Just… no.

‘Space Ghost Coast To Coast’ is a slightly less offensive example of this, as Bayley uses pop culture references to paint a picture of an early and formative friendship in which the friend in question has shifted into a person who brings a gun to school. “Playin’ too much of that GTA / Playin’ too much of that Dr. Dre / Doom, Quake, where’d you get the fun from, eh? / Really think that metal gonna make you safe?” The track is also a good example of the inexplicable trap influences that permeate the record. Besides the usual rattling hi-hats and snares and the occasional scatting, there’s also these metallic percussive sounds incorporated in the instrumental that are both sonically interesting and don’t break the flow of the song.

Meanwhile, one of the main singles for the record, ‘Tokyo Drifting’ is so much that it honestly feels like the band making a parodic pastiche of their own intentions. Denzel Curry features on the song and his verse along with the driving sample of the track are just about the only redeeming factors. Otherwise, Bayley doing his best to vocal process his way into rap affectation and referring to himself as ‘Wavey Davey’ is easily one of the most annoying moments on the record.

Elsewhere, ‘It’s All So Incredibly Loud’ is a highlight of the album, as it continuously crescendos in a way that’s impressive both musically and narratively, detailing those awful split-second pauses in conversation when bad news is broken. Meanwhile, nothing can surpass the horror of genuinely hearing the line “Big dicks and big ol’ titties on the sly” in ‘Waterfalls Coming Out Your Mouth’, and no amount of 808 samples will fix that.

Seems like, for every win on the album, there’s a part of it that’s equally as awful. And perhaps that’s to be expected of a band that are experimenting with something new and clearly experiencing some growing pains. When it pays off, Glass Animals almost seem to catch on to some strange surreal cross-over universe that’s as familiar as it is exciting. When it doesn’t, you just wish someone in the room would tell them that rattling hi-hats and sample packs don’t replace interesting songwriting. (6/10) (Ellie Wolf)

Listen to Dreamland by Glass Animals here via Spotify, and tell us what you think below!