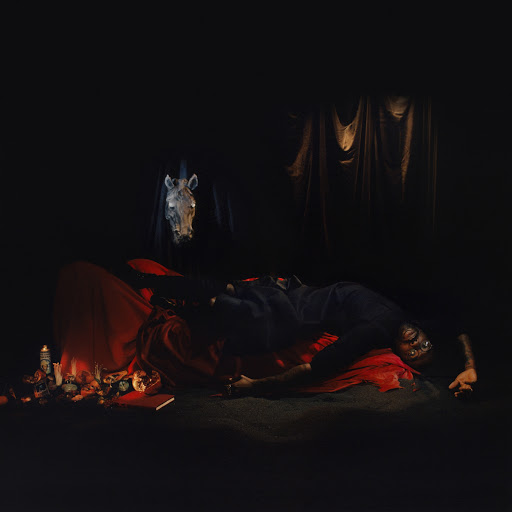 Ghostpoet’s grimy hybridisation of hip-hop and indie has never left much room for light, but fifth album ‘I Grow Tired But Dare Not Fall Asleep’ is incredibly prescient.

Obara Ejimiwe – more commonly known as Ghostpoet – has long understood the power of music as a means of expressing one’s deepest anxieties. Delivered in a half-sung, half-spoken drawl, his work carries the demons of past relationships and the malaise of austerity Britain. His bleak illustrations of working-class life have earned him heaps of critical success; his 2011 debut album Peanut Butter Blues & Melancholy Jam and 2015’s Shedding Skin both received Mercury Prize nominations. Of course, the gloom persists on his fifth effort, I Grow Tired But Dare Not Fall Asleep.

Ejimiwe’s vocals are at their most downbeat as he candidly navigates his way through some tricky subject matter. His imagery can be heavy-handed like on the otherwise great ‘Humana Second Hand’ (“once again the happy pills ain’t doing shit”), but for the most part, his woes are imparted with gripping detail. The album takes deep dives into crippling mental health issues and messy break-ups, but also picks apart larger-scale topics. Society’s reliance on technology is a common theme, most notably on ‘Concrete Pony’ where Ghostpoet pleads for social media validation. Meanwhile, ‘Rats In A Sack’ examines the growing threat of far-right nationalism, with vitriolic cries of “out means out”.

Straddling electronica, alternative rock and spilling over into jazz-influenced territory, Ghostpoet albums have always been difficult to pigeonhole. I Grow Tired… is no different, but it yields some of his most experimental and gratifying compositions to date. Atonal synths whir and drone on ‘Black Dog Got Silver Eyes’, while harsh static interjects on opener ‘Breaking Cover’. Scratchy, yowling guitars and melancholy basslines form the brunt of the instrumentals, but these abrasive elements are embellished with elegiac strings, spectral piano and breathy female backing vocals, which are best exhibited on the sensual, doomy funk of ‘This Train Wreck Of A Life’. It’s these little details that add further weight Ejimiwe’s storytelling, reflecting the dark and confusing times we’re living in.

The emphasis on ambience results in one of Ghostpoet’s most forward-thinking albums. His exploration of personal and political strife is taken to bleak new depths here, and once again demonstrates his ingenuity as both a writer and producer. I Grow Tired But Dare Not Fall Asleep leaves little room for light, but in a world where dejection and hostility are becoming increasingly transparent, it couldn’t be any more relevant. (8/10) (Matty Watkin)

Listen to I Grow Tired But Dare Not Fall Asleep by Ghostpoet here via Spotify, and tell us what you think below!