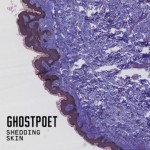 Shedding Skin is the third full-length album from former Mercury Music Prize nominee Ghostpoet, the recording name of Londoner Obaro Ejimiwe. His 2011 debut Peanut Butter Blues And Melancholy Jam was considered a dark horse at the awards ceremony, and though it was eventually beaten by PJ Harvey’s Let England Shake, it set him up as one of the most promising artists of the new decade. A very stark follow-up, Some Say I So You Say Light, arrived in 2013, allowing him to make a dent in the British charts for the first time. To avoid getting himself stuck in a rut of limited niche appeal, Shedding Skin, as the title implies, is a change of direction for the restless rapper.

While he’s always been clever in his use of different styles, his two previous albums were both unmistakably hip-hop orientated, much like fellow Londoner Roots Manuva. This time, Ghostpoet uses a conventional band set-up – a guitar / bass / drums trio – as the backdrop to his musings on the mundane, everyday details of being in a relationship. There are personal and societal levels to the record – opener and lead single ‘Off Peak Dreams’ deals with the uninspiring daily grind set a real live band feel. ‘Be Right Back, Moving House’ is a gentle lilt that gives insight into Ghostpoet’s mindset: “I’ll be sitting back here / looking for the answers”. He’s slightly more at ease with his melancholia this time around, despite the moody atmosphere.

On the tracks that deal with relationships, ones with inspired titles like ‘Yes, I Helped You Pack’ and ‘That Ring Down The Drain Kind Of Feeling’, Ghostpoet has a number of female guest vocalists to have a conversation with. He channels indie weirdo Tom Vek on album highlight ‘Sorry My Love, It’s You Not Me’, as he and guest Lucy Rose argue back and forth: “I think that’s the issue babe / I want to feel magic”. The rhythms of the backing band are pleasantly reminiscent of post-Kid A Radiohead, with shuffling jazz-derived drumming and minor key piano, and modern indie guitar sounds like Wild Beasts and Dutch Uncles. Shedding Skin is a satisfyingly dark change of direction, made in possible in part by the different musical settings that his backing band provides but mainly because of Ghostpoet’s introspective and paranoid lyrics, at once bleak and daring to hope for happier times ahead, providing an alternative soundtrack to life in 2015. (7/10)