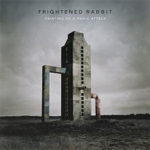 It has been three years since the last Frightened Rabbit record Pedestrian Verse, and during that time the Scottish five-piece have toured to the brink of exhaustion, almost broken-up and, most importantly, frontman Scott Hutchison moved to Los Angeles. Hutchinson’s turbulent time in L.A. is a clear commonality running through the music of this eventual fifth album Painting Of A Panic Attack, and it is the subsequent doom which comes from this that will send fans into an jubilantly ironic cheer; as Hutchison croons during the pop-rock of ‘Still Want To Be Here’: “Fuck these faceless houses and everyone who lives in them”.

It is this internal conflict between Hutchison, and subsequently Frightened Rabbit, which has gotten the Scots this far and there are no signs of letting up here. ‘Little Drum’ is a great reminder of the crises that Hutchison faces within himself (“the little drum inside behaves itself until you turn 25 / and then it strikes this all we’ve lived this long and only ever half alive”). The production of The National’s Aaron Dessner is a key factor throughout the record; the excellent ‘Blood Under The Bridge’ brings an upbeat look on the bleak side of life as Dessner uses his experience from his own band to bring a The Boxer-style alternative rock song. Painting Of A Panic Attack, in spite of its blatantly depressing outlook, works when it is at its most accessibly pop. Single ‘Get Out’ harks back to 2013 hit ‘The Woodpile’ as the punching vocal delivery of chorus “get out of my heart / she won’t, she won’t”, combined with the chugging guitar sound, captivates the listener.

There are negatives here; the forgettable ‘Lump Street’ does nothing to help the album as the band begin to repeat themselves slightly late on, especially when placed in-between the tender ‘400 Bones’ and album closer ‘Die Like A Rich Boy’, while ‘An Otherwise Disappointing Life’ builds to a crescendo which falls flat. But to say that Frightened Rabbit have failed during Painting Of A Panic Attack would be wrong, in fact the album is a triumph as a band take stock of what has gotten them this far while providing enough development to leave the listener craving album six. Frightened Rabbit continue to excel in their bleakness and shine in their darkness. (8/10)

Listen to Painting Of A Panic Attack here, and tell us what you think below!