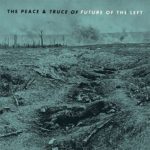 The latest offering from Cardiff’s post-hardcore heroes Future Of The Left has been a comparatively long time in the making, following the release of the excellent How To Stop Your Brain In An Accident in 2013 – a record which featured themes of aggression and absurdity in equal quantities and punched ideals so far down one’s throat that it was impossible not to abide to the law of singer/guitarist Andy Falkous. Since then guitarist/vocalist Jimmy Watkins has left the band, and while many may have feared that the grit and edge of the group may have been diminished slightly – but they would be wrong, so very wrong.

The Peace & Truth… is a punchy, aggressive and excellent album from start to finish. Opening track ‘If AT&T Drank Tea What Would BP Do?’ is a pointed and driven offence at any doubters, as if the band made this their mantra for the album: ‘doubt us at your peril’. The bass from Julia Rozicka is superb and can both floor and inspire the listener in an instant. ‘In A Former Life’ follows, bringing with it the whit and nonsense of previous records as reincarnation is dismissed while speaking of “Aristotle is going to the cinema”, before concluding: “crop rotation is not on the schedule / crop rotation does not really work”.

This cynical and bitterly funny look on life from Falkous certainly helps the records, and has done right back to his days serving in the short-lived cult heroes McLusky; the hilarious ‘Miner’s Gruel’ is a track where everything comes together in a beautiful mess to create a well-strung rock track. While ‘The Limits Of Batteships’ covers so many rock sub-genres, there remains an inherent tightness that it’s impossible not to give it a nod as one of the album’s highlights. The confidence throughout the band is noteworthy, here we have a band more than aware of what makes them great. The In Utero-like ‘Back When I Was Brilliant’ has piercing guitars and vocals, while the atmospheric drums provide another fantastic layer as the track builds and builds before collapsing into a minimal ending and in doing so bringing an end to the best rock song of 2016. ‘50 Days Before The Hun’ has a guitar sound remarkably similar to Beck’s ‘Loser’ in a rare moment of inspiration that isn’t uniquely theirs, but with vocal ideas reminiscent of Sleaford Mods, early Horrors and Melvins it is a small gripe with an otherwise flawless track.

The Peace & Truce Of Future Of The Left hits you with so many ideas whilst keeping the same core sound that it truly is a remarkable record. Everything works, from the moments of aggression (of which there are many) to the remarkable balance of message and humour in the lyrics. This album may very well go under the radar, but it would be an injustice to call this anything but the best rock record since Deafheaven’s New Bermuda last year. (9/10)

Listen to The Peace & Truce Of Future Of The Left here, and tell us what you think below!