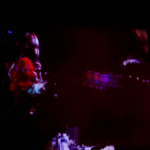 Originally conceived during 2009, Josh Dibb a.k.a. Deakin has finally released his debut solo record Sleep Cycle to much acclaim and no small amount of relief. As a member of the experimental indie heroes Animal Collective, his band has lived up to their collective namesake. While Noah Lennox (Panda Bear) is the most prolific when it comes to solo albums, each member has branched out to create their own material, special and memorable in its own way.

Sleep Cycle originally began as a Kickstarter-funded album; with the donations intended to go towards a performance at the Festival au Desert in Mali, Africa. The project finally raised $25,000 with a significant portion donated to an organisation called Temedt, which helps enslaved Tuareg people. Although the amount was raised comfortably, Dibb had second thoughts about the album and tour and put it on the backburner. After completing work on Centipede Hz with Animal Collective, he left the band in 2013 and got to work on the record and finally completed it in early 2016.

At six tracks long, the album plays into its African origins, whilst melting into typical Animal Collective inspired vocals and synths. Opening track, ‘Golden Chords’ is filled with melancholy fingerpicking rhythm, which is backed by hazy, hypnotic nature. This gently blends into ‘Just Am’ which lends itself more to the psychedelic sounds of Animal Collective. The album standout, ‘Footy’ thrashes through heavy guitar riffs backed by a bassy backbeat. Dibb’s vocal twist and turn around the impressive arrangements – almost like a transcendental journey. ‘Seed Song’ heads towards an ambient mantra-influenced sound, alongside chanting and unrecognisable sounds which blend into the choral album closer ‘Good House’. Its hymnal qualities hark back to the reason why Dibb created this project. It closes with an appropriate ambient end which perfectly represents the context behind the record.

Fans of Animal Collective will certainly enjoy and appreciate the experimental approach by Dibb, the one member whose work we’ve been most anticipating hearing outside the context of the group. Sleep Cycle takes the listener on a journey through a captivating electronic soundscape. Dibb has created an unconventional which is stylistically indebted to Animal Collective, but its delivery is raw and sincere. (6/10)

Listen to Sleep Cycle here, and tell us what you think below!