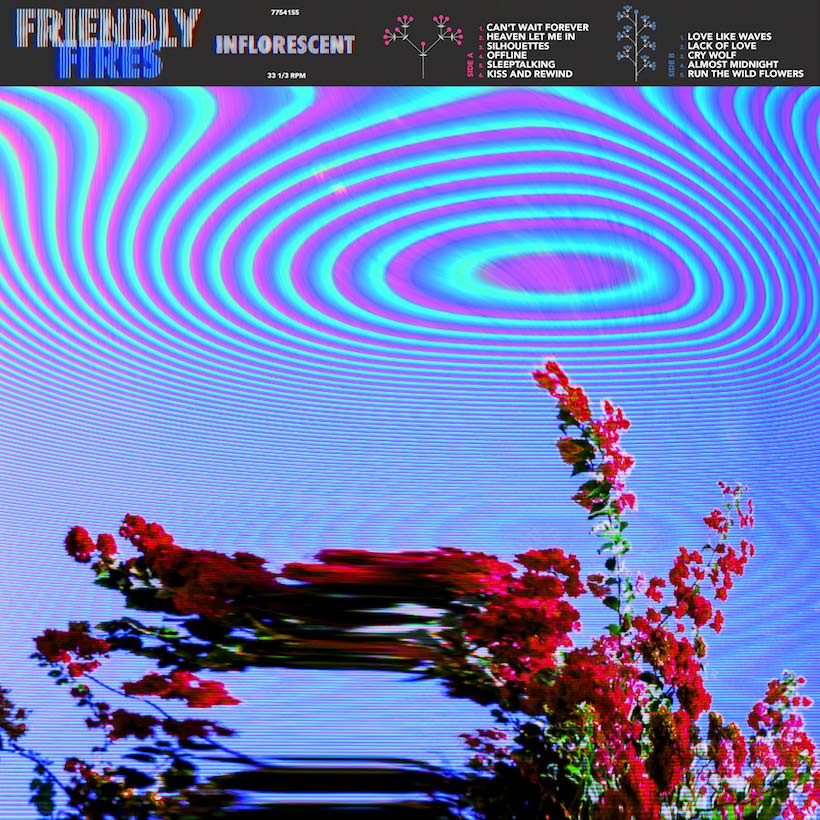 Pioneering the revival of electronic influences in British indie at a point when unspeakably bad post-Arctic Monkeys acts were dominating the national scene, Friendly Fires were on the verge of proper mainstream success when they last released an album way back in 2011, the kaleidoscopic, tropical house of Pala. However, side projects and various other preoccupations, some of them outside the group’s control, have led to a whopping eight-year gap between albums, an absolute eternity in modern music industry terms. In the normal course of things, the St. Albans-based trio would be on their fifth or sixth album by now, positioning themselves as a kind of legacy band or elder statesmen like Hot Chip, but as it is, Inflorescent needs to balance the requirement for the kind of new thrills expected of a third record – especially one that’s taken so long to make – with a maturity befitting a band that’s been around for well over a decade.

The result is something that attempts to both of these things, but doesn’t completely succeed in doing either. The precision-guided house of ‘Love Like Waves’, a single that appeared well over a year ago, shows the kind of intricate production and effortless catchiness of which Friendly Fires are still very much capable, at least when they’re not chucking in every conceivable element to make sure something sticks. But when it doesn’t succeed, it tends to result in maximalist but generic exercises like the Disclosure-produced ‘Heaven Let Me In’, which sounds neutered and bland in its attempt to make rich, layered modern house tunes for 2019, or the makeweight ‘Cry Wolf’. The other niggling issue is that it’s hard to see how their optimistic, apolitical electronic take on indie-pop is supposed to translate into the prevailing environment in 2019, where there’s little to be upbeat about. Instead, Inflorescent sounds like it’s dropped out of a wormhole from (comparatively) happier times a decade ago.

And yet, there’s a good handful of quality moments where Friendly Fires’ decision to ditch the polyrhythms of Pala and go for a more conventional drum machine / acid-house synth approach, while retaining the maximalist production qualities pays off. The knowingly titled opener ‘Can’t Wait Forever’ mines some very traditional club influences in the name of innocent fun. Ed Macfarlane’s voice is as throaty and smooth as ever on ‘Silhouettes’, while the Nineties-retrofitted house of ‘Sleeptalking’ and the flamboyant ‘Run The Wild Flowers’ and ‘Offline’ are also highlights. Their banging cover of Charles B & Adonis’s ‘Lack Of Love’ is a great choice, and in many ways is the best example of the album’s aims – unabashed hedonism.

Inflorescent is extremely finely tuned and enjoyably over-the-top in many places, and it’s hard not to get swept up in it – while it’s actually on. It’s just that, once it’s over, it’s hard to remember anything that’s actually happened. As an exercise in pure escapism, it ought to do its job as far as their old fans are concerned, but it’s difficult to see how Inflorescent is going to attract any new ones. Ultimately, it’s not been worth an eight-year wait for a record that takes so few real risks. (6/10) (Ed Biggs)

Listen to Inflorescent by Friendly Fires here via Spotify, and tell us what you think below!