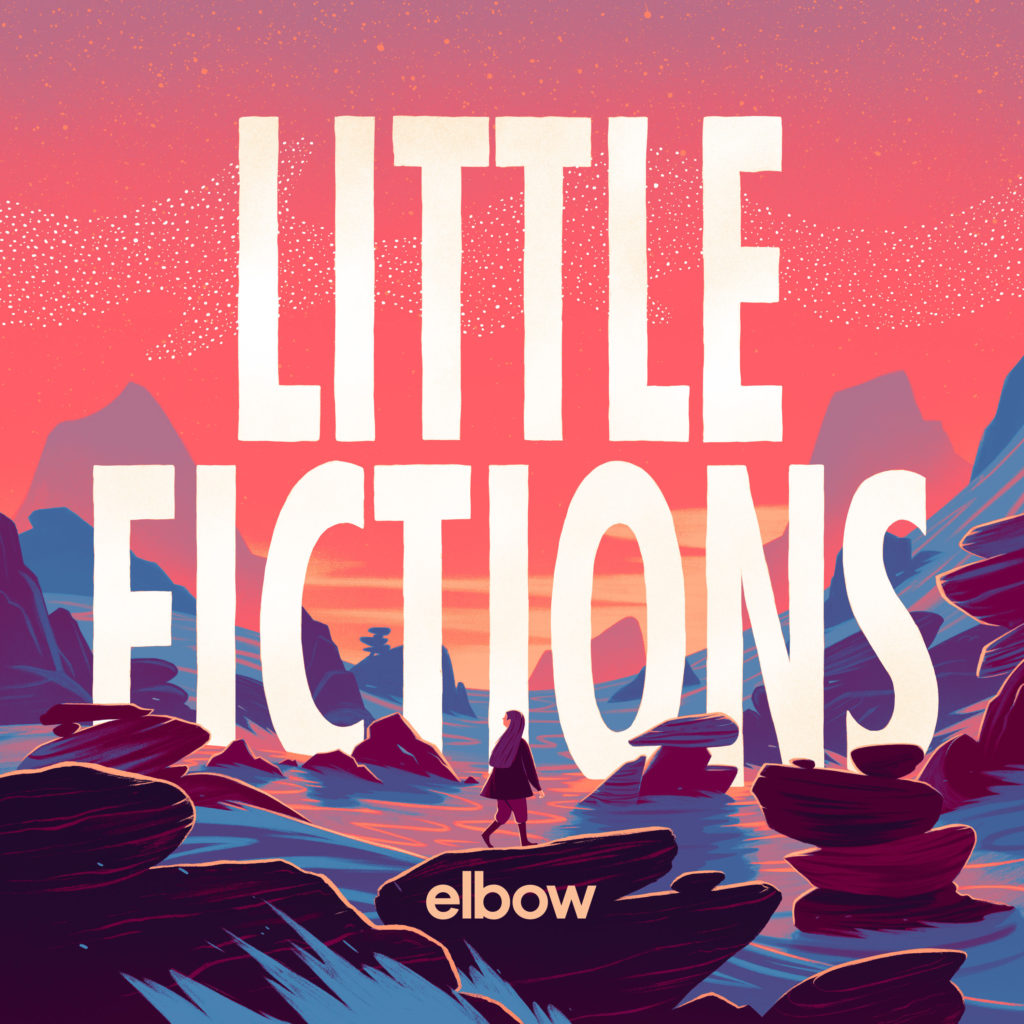 Newly-married Guy Garvey sounds truly happy on ‘Little Fictions’, as bold and accomplished an album as Elbow have ever made.

Throughout their nearly two-decade-long career that’s seen them go from critical darlings to household names, the one thing that Elbow have done consistently and peerlessly is exude warmth. Not the kind of warmth associated with sunshine and happy-clappy-ness, as Guy Garvey and co.’s music could never be accused of being anything so tacky and disposable as ‘feelgood’ – but genuine, human warmth that comes from long-term love and trust, the comfort of close friendship, and even the endurance of hard times in close-knit communities.

It’s this quality that propelled Elbow to Mercury and BRIT wins with 2008’s The Seldom Seen Kid, and to soundtracking the 2012 Olympics with ‘First Steps’, and playing to huge British festivals. None of this has come at the expense of quality or invention, as all the while they have steadily added to a brilliantly consistent catalogue of excellent albums, the most recent being the elegiac The Take-Off And Landing Of Everything three years ago.

The departure of drummer Richard Jupp in early 2016, a founder member of the original group formed in 1990 that eventually became Elbow, might have threatened to destabilise the band’s magic, particularly as they haven’t replaced him with another full-time member. On Little Fictions, their seventh studio album, percussion is created from loops of other instruments played more rhythmically than before. The constant rattling underpinning ‘Firebrand & Angel’, or the understated ‘Gentle Storm’, best illustrate this subtle sonic shift, and it makes for the most intriguing sounding Elbow album since 2003’s Cast Of Thousands.

However, the most dramatic change is Garvey’s detectable newfound happiness. Little Fictions was written last summer, just after the singer had married actress Rachael Stirling, and they announced late last year that they’re expecting their first child together in March. As a man whose heartbreak whose laid bare in 2005’s Leaders Of The Free World after Edith Bowman had left him, and then again in The Take-Off And Landing Of Everything after his long-term relationship with writer Emma Jane Unsworth ended in 2012, Garvey’s long sought-after personal happiness shines unmistakably through, though his trademark husky yet fragile delivery makes relief seem like the primary emotion on display.

‘Trust The Sun’ is the clearest example of this shift in Garvey’s disposition. While he’s always been fundamentally optimistic despite his world-weariness, it’s as if he’s overjoyed to finally see some material basis for that optimism to be borne out. With no traditional percussion to speak of, it’s built from gently winding piano and dampened acoustic guitar strings, with Garvey’s lilting, listing voice making it an Elbow career highlight. Just like all his best songs dealing with matters of the heart, he sings, vulnerable and disarmed in the face of his whole world having changed for the better, “you’re my reason for breathing”. In ‘Gentle Storm’, his self-effacing Northern humour comes through as sings about doing “my shambling best”. Album opener and lead single ‘Magnificent (She Says)’ begins with Garvey’s vocals already in mid-soar, telling us everything long-term Elbow fans need to know.

That same radiance is seen in the sparkling, sonorous electric guitar riff of ‘All Disco’, and is also present in more gentle moments like ‘Montparnasse’ and ‘Head For Supplies’. Both are sparse and tender moments dominated primarily by atmospheric piano and which allow Garvey’s voice to hold court without distraction, reminiscent of the emotionally devastated ambience of the second half of Leaders Of The Free World – but this time much happier, of course!

‘K2’ sees Garvey uneasily tackle the subject of Brexit, and it makes for the only real false step on an otherwise faultlessly confident record. Stuck between wanting to return his modest narrative voice and going full-on Bono with his lyrics, Garvey sticks to odd snippets like “island status that makes everyone hate us” and “gambled the farm on a headline”, masking his voice with echoes as if to prevent himself from having to fully commit.

The penultimate track ‘Little Fictions’ serves as the real showstopping moment on the album. Appearing to be the only track with an actual drummer, as a simple but arguably human-generated rhythm is pounded out as skronking strings explode in the sky around it, the 8:30-minute track is the lynchpin of the whole record, revealing its inner theme of the stories and myths, the little fictions, we tell ourselves to get by or hold ourselves together.

Little Fictions is as bold and accomplished an album as Elbow have ever released. While it’s hard to detect any obvious singles or crowd-pleasers in the mode of ‘One Day Like This’ or ‘Lippy Kids’, its full of the exuberant warmth that have characterised all their finest moments to date, and is the latest instalment in one of the most remarkably consistent discographies in recent memory. It may not win over any new fans, but to not be moved in some way by it is to admit there’s nothing pumping through your veins. If Guy Garvey ever reads this – please, never stop! (8/10) (Ed Biggs)

Listen to Little Fictions here via Spotify, and tell us what you think below!