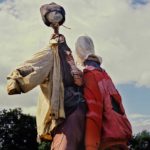 Released a little over two years ago, Eagulls’ self-titled debut was one of the rare post-punk revival records over the last decade that has truly understood the dynamics of the genre and also revitalised it with something quintessentially now. Few have channelled the ghost of Ian Curtis as successfully as lead singer George Mitchell, but the sound behind Eagulls was aggressive and urgent, driven by existential panic and despair that was relevant to the shocking socio-economic opportunities faced by their generation. A solid commercial success for a small indie release, the five-piece has wasted no time in following it up. However, instead of doubling down on their existing sound, Ullages represents a significant and bold artistic gamble, ditching the late ‘70s post-punk maximalism for something a lot more gothic and sparse, influenced by The Cure, Echo & The Bunnymen and the alternative rock of the ‘80s.

The title, as well as being an anagram of the group’s name, is a word meaning any amount by which a container isn’t full of a liquid. Suitably, it stands for an absence, a negative, something that isn’t there, as Ullages seeks to prise open Eagulls’ previous sound, and use openness and space to its advantage. Mark Goldsworthy and Liam Matthews’ guitars still reverberate and echo in the way they used to, but on Ullages it seems to be put to a weightier, more magnificent use. The opening trio of the Drenge-like ‘Heads Or Tails’, in which Mitchell revisits familiar themes with lyrics like “we never know what our outcome involves”, the twanging, early-U2 feel of ‘Euphoria’, a song that couldn’t be less onomatopoeic if it tried, and the cavernous ‘My Life In Rewind’ are the greatest illustrations of the new direction, throwing any listeners expecting more piledrivers like ‘Nerve Endings’.

Mitchell’s lyrics address the same sense of angst and dread, and his lusty howl is suited to the new style, never falling in to the traps of self-absorption or navel-gazing, as the rather stately pace continues until well over halfway through the album, covering a darkly lysergic interlude called ‘Harpstrings’ and the complex, shifting drum landscape of ‘Psalms’. Almost imperceptibly, Eagulls pick up the pace, co-opting the ‘10s shoegaze revival sound with ‘Blume’ followed by the fantastic arena-goth of album highlight ‘Skipping’. In honesty, this acceleration is timely, as an entire album of Disintegration-esque sonic cathedrals would have dragged by this point. The inventive, infectious ‘Lemontrees’ completes a back-to-back trio of excellent, faster-paced tracks that give Ullages the feel of a musical journey, before winding up back where they began on the stormy dirge of ‘White Lie Lullabies’.

Along with fellow Leeds bands Hookworms and Autobahn, Eagulls continue their trajectory as one of the best guitar acts in Britain. Some fans of the original might initially be put off by the almost complete absence of danceable bursts of angry energy that populated their debut, but Ullages shows not only a willingness to experiment but also that they can work on a grand scale, tweaking their sound for arenas rather than just sweaty moshpits, without sacrificing their core principles. Furthermore, there’s not a single weak moment on it. Claustrophobic yet epic at the same time, Ullages is a triumph – let’s hope it can find an audience. (8/10)

Listen to Ullages here on Spotify, and tell us what you think below!