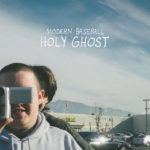 Philadelphia quartet Modern Baseball have built a reputation for playful songs about love and the internet – all standard stuff for a pop-rock-meets-emo band. But on the back of a cancelled tour of Australia and news of co-frontman Brendan Lukens’ time in rehab for manic depression, Holy Ghost stands as a moment of triumph in a dying genre. Splitting the record into two sides (the first written by guitarist Jake Ewald, the second by Lukens) the band’s close relationship becomes apparent, with songs flowing seamlessly despite the change of mindset.

There are moments of beautiful artistry; the anthemic ‘Wedding Singer’ features piercing guitars and a pop sensibility, while ‘Mass’ creates a moment of euphoria in its emotional and immediate guitar sound. Meanwhile, there is the “toast to previous mistakes” in single ‘Apple Cider I Don’t Mind’ – a Killers-meets-The National guitar-heavy track. There are some sadly anonymous moments on the record; there is the generic ‘Note To Self’ a song you can hear pretty much anywhere if you were to go on a pop-rock playlist of the last five years. ‘Hiding’ fails due to its vocal incompetence, the song may resume normality for the album but after two minutes of stale attempts at delicacy it is a song which shows Modern Baseball are at their best when making an emotive style of pop-rock.

Modern Baseball have gained a new level of importance in the fourth wave of emo and in Holy Ghost there are times where they have the songs to match, but there is a constant niggle of ‘this has been done before’ too many times during the album which ultimately limit its scope for greatness. (7/10)

Listen to Holy Ghost here via Spotify, and tell us what you think below!