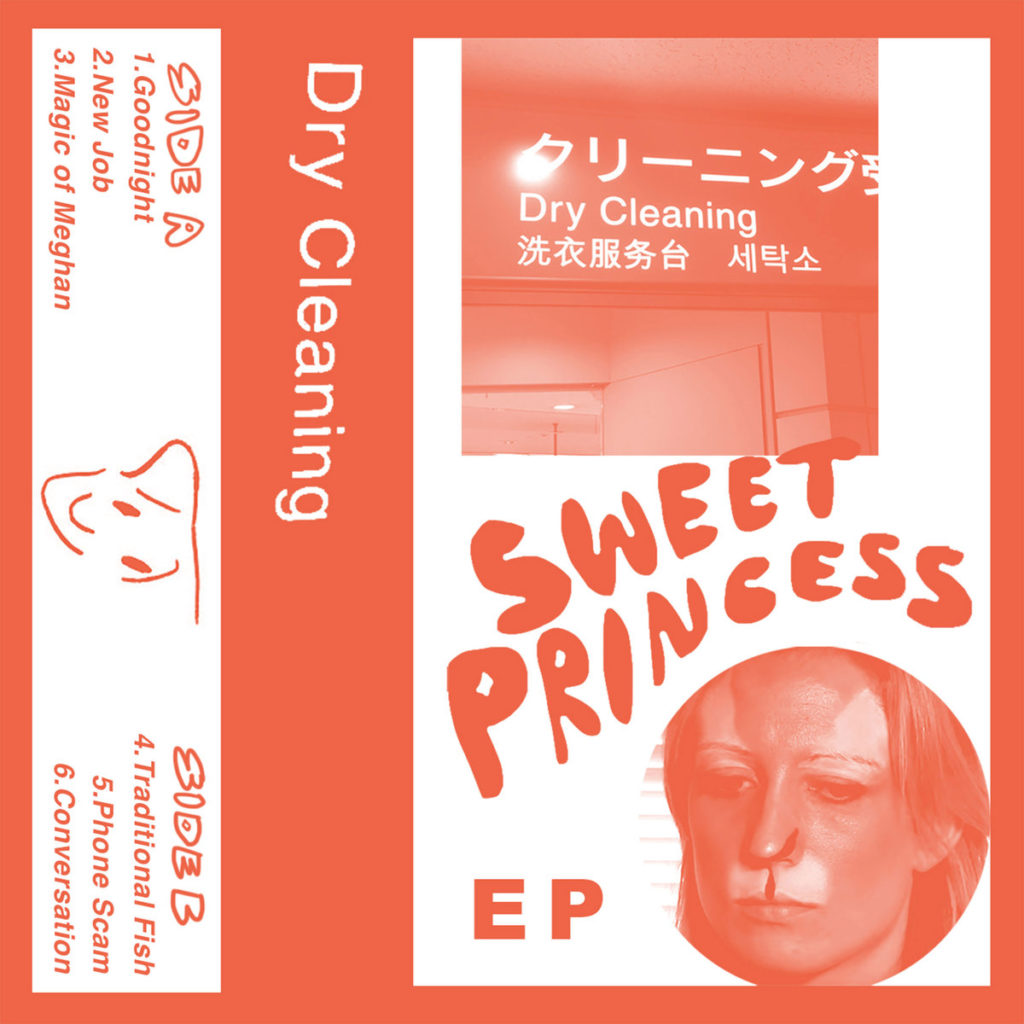 In the aftermath of some exposure last month with their endearingly excellent single ‘Magic Of Meghan’, a track that saw acerbic lead singer Florence Shaw recall the day she broke up with an ex being the same day as the now-Duchess of Sussex announced her engagement to Prince Harry, London four-piece Dry Cleaning deliver their debut EP. Their sound falls somewhere between absurdist spoken-word and lo-fi post-punk, and the six tracks that make up Sweet Princess reflect a confident, self-aware and highly intelligent band.

Having never even thought about being on a stage until around 18 months ago, Shaw assembles her seemingly non-sequitur lyrics in a way that makes a sideways, satirical commentary on the mundanity and absurdity of a life dominated by social media and online, impersonal interactions. Opening track ‘Goodnight’ feels like a cross between the insistent pulse of Sleaford Mods with a more conventionally DIY/garage-punk edge courtesy of the clipped music that bassist Lewis Maynard, drummer Nick Buxton and guitarist Tom Dowse lay down, but it’s Shaw’s sardonic presence that makes it a winner. Apparently constructed from random YouTube comments, it captures the fragmented, voyeuristic nature of online existence.

Closing track ‘Conversation’ essays the strange first moves in an online dating scenario, where you’re constantly trying to second-guess yourself. The girl-pop vox of ‘New Job’, in which Shaw lists an assortment of anxieties around social interactions, and the scuffed ‘Traditional Fish’, featuring nonsensical, cut-and-paste bricolage of various tabloid headlines (“Who’s the Pride of Britain? / Michelle blasts Mark / I was shot in the head by my kid”), are other terrific examples of what Dry Cleaning’s outlook is.

Then there’s the aforementioned ‘Magic Of Meghan’, one of the stand-out singles of 2019. While it may seem a bit odd for a stridently independent act such as Dry Cleaning to not rally against the monarchy, it’s refreshing to see some intelligence put into a song like this instead of blank sloganeering, critiquing the frequently negative coverage that the American gets in some of Britain’s less salubrious red-tops. Set to a needling, Raincoats-esque riff, Shaw’s declaration “just what England needs / you’ll get to change us” is the first time her tone rises above deadpan, into something more straightforward and hopeful.

While it’s very early days for Dry Cleaning, Sweet Princess completely justifies the impressive claims made on their behalf as a live act so far. Their diffident, lo-fi musical approach shows a great appreciation for the angular indie lineage they’re in, but it’s Florence Shaw’s presence in front of a microphone, essaying the minutiae of the modern condition, that makes them truly stand out. (8/10) (Ed Biggs)

Listen to Sweet Princess EP by Dry Cleaning here via Spotify, and tell us what you think below!