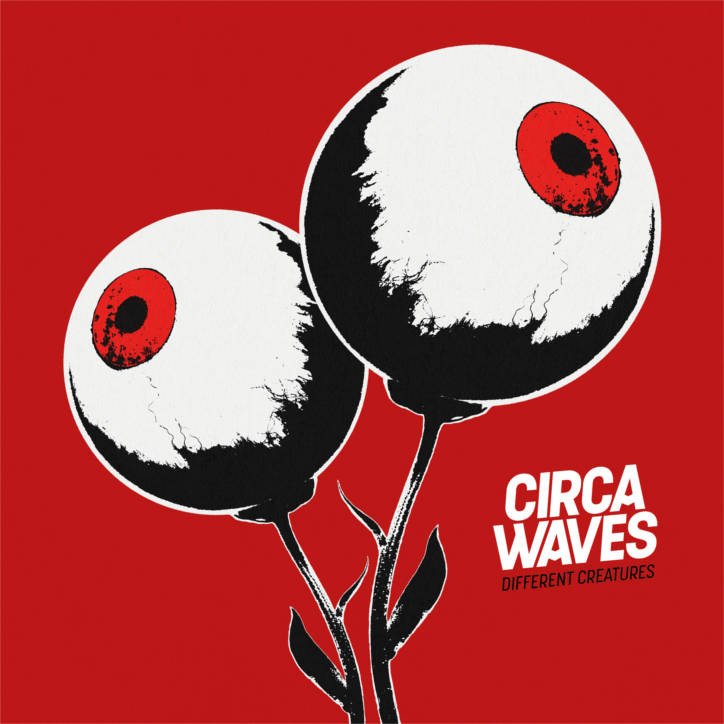 Circa Waves’ make-or-break second record ‘Different Creatures’ expands the sound of their debut, making for festival-ready tunes their fans should lap up.

Circa Waves are extremely ambitious and they are not shy to talk about it, emphasizing their desire to become the biggest band in Britain. After releasing a well-received debut Young Chasers in 2015, Kieran Shudall (vocals, guitar) Sam Rourke (bass), Colin Jones (drums) and Joe Falconer (guitar) decided to record an album, which in their minds, would allow the band to eventually headline some of the biggest festivals, such as Glastonbury, Reading and Leeds. As promised, 2017’s Different Creatures moves away from its predecessor’s indie influences and offers songs that are bigger and heavier, with a clear intention to reinvent Circa Waves as the next, big and sought-after rock headliner. With Shudall going as far as saying that they are “the future of rock music” the expectations rise to yet another level.

With so much confidence in themselves and in the music that they just released, it is fair to say that Circa Waves do not disappoint, but neither do they present earth-shattering material. Different Creatures is a very solid effort from the Liverpool-based band, despite the album being a little tiresome and tedious at certain moments. ‘Crying Shame’ and ‘Without You’ are probably the best examples of Circa Waves losing their focus and letting repetitiveness and dull lyrics dominate even the heaviest sounding guitars.

That being said, the majority of songs on the album will do just fine while the band will be touring and headlining festivals, while trying to dominate the world with their music. ‘Wake Up’, the opening track on Different Creatures, leaves no doubt about the seriousness with which Shudall and his mates approached the topic of rock music and big guitars. The next song on the list, ‘Fire That Burns’, not only confirms that theory, but also radiates with the band’s enthusiasm. It is definitely one of the most memorable tunes on the record, combining heavy guitar riffs and a die-to-hear-live chorus.

Speaking of songs which would be amazing to hear live, there are a few others to pick from on the LP. ‘Goodbye’ has a lot of potential to become quite a crowd-pleaser, but the song that the audience at Glastonbury will wait with impatience for is ‘Stuck’, as it combines the band’s infectious energy with their new and darker approach to the craft of music-making. Although, Different Creatures is taking advantage of rock’s ability to deliver grand and cinematic sounds, Circa Waves managed to slow the tempo down for songs such as ‘Love’s Run Out’, and expose their tender and vulnerable side.

While not everyone will enjoy, or appreciate Circa Wave’s change of direction, the band is willing to take that risk and follow their dreams of performing in world’s biggest venues and busiest stages. It is hard to say to what degree will they be successful in their endeavour, but one thing is certain: no one believes in Circa Waves becoming the next big British rock band more than these four guys themselves. But as they’re probably aware, it takes two to tango, and the band’s fans will need to decide if that’s the kind of music that there’re willing to dance all night to. (7/10) (Alicja Rutkowska)

Listen to Different Creatures here via Spotify, and tell us what you think below!