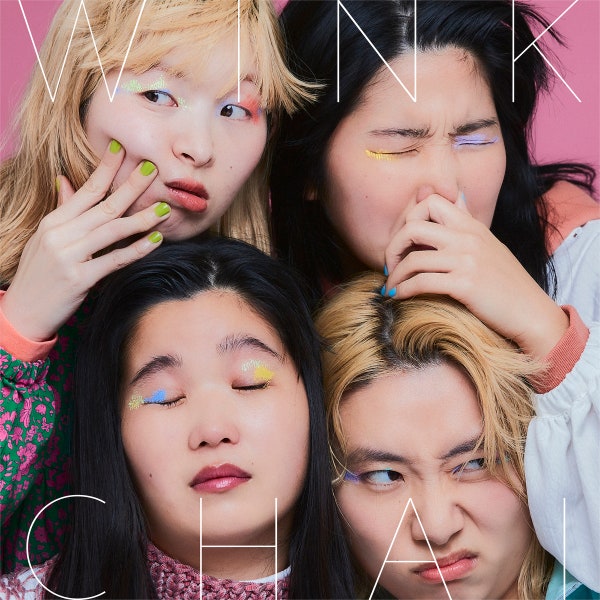 Advancing their sound in a pop-oriented direction, CHAI sacrifice the effectiveness of their message with sugary third album ‘WINK’.

Hazy synth swells and sickly-sweet melodies ooze from Japanese four-piece CHAI’s third album release WINK, an album that unapologetically promotes fun and self-love with every track. The group’s creative output has clearly been shaped by the extensive time at home its members have experienced throughout the pandemic; once a pop-punk outfit, CHAI are now exploring lo-fi, hip-hop and R&B elements in their music, toning down their previously energetic sound to create an album full of easy daytime listening, with a hint of oddity here and there.

Despite the incredibly sugary sound of some of the tracks (opener ‘Donuts Mind If I Do’, for example, sounds like a tune from a kid’s TV show) this album isn’t entirely without edge – the intensely whispered vocals of ‘KARAAGE’ are highly unusual, and provide a nice bit of weird to contrast with the pop-overload feel of most of the tracks. However, much of WINK does just feel childish, and not in its composition, but in its delivery. The square wave-style synth is clearly favoured by this group, and it features on almost every track, creating that nostalgic, old video game vibe. It is a bit overused though, and that certainly contributes massively to the childlike feel of the whole album.

Another juvenilia aspect of this album is the way in which empowerment is presented. CHAI access positivity through innocence, such as in the lyricism of ‘Maybe Chocolate Chips’, a song that discusses bodily flaws and imperfections like moles in the guise of chocolate. How fun. Maybe it takes a certain positive mindset to appreciate such lyricism, otherwise it just seems a bit on-the-nose.

Innocence (and its subversion) are powerful instrument in an artist’s creative toolbox, but they also have the potential to act as a double-edged sword; WINK is so sickly in places that the message behind the music is easily obscured or undermined. Clearly, CHAI are advancing their sound – this album appears to feature their finest production quality to date – but the direction in which they are heading may become a little too pop-centric if they continue down this path. (4/10) (Jacob Kendrew)

Listen to WINK by CHAI here via Spotify, and tell us what you think below!