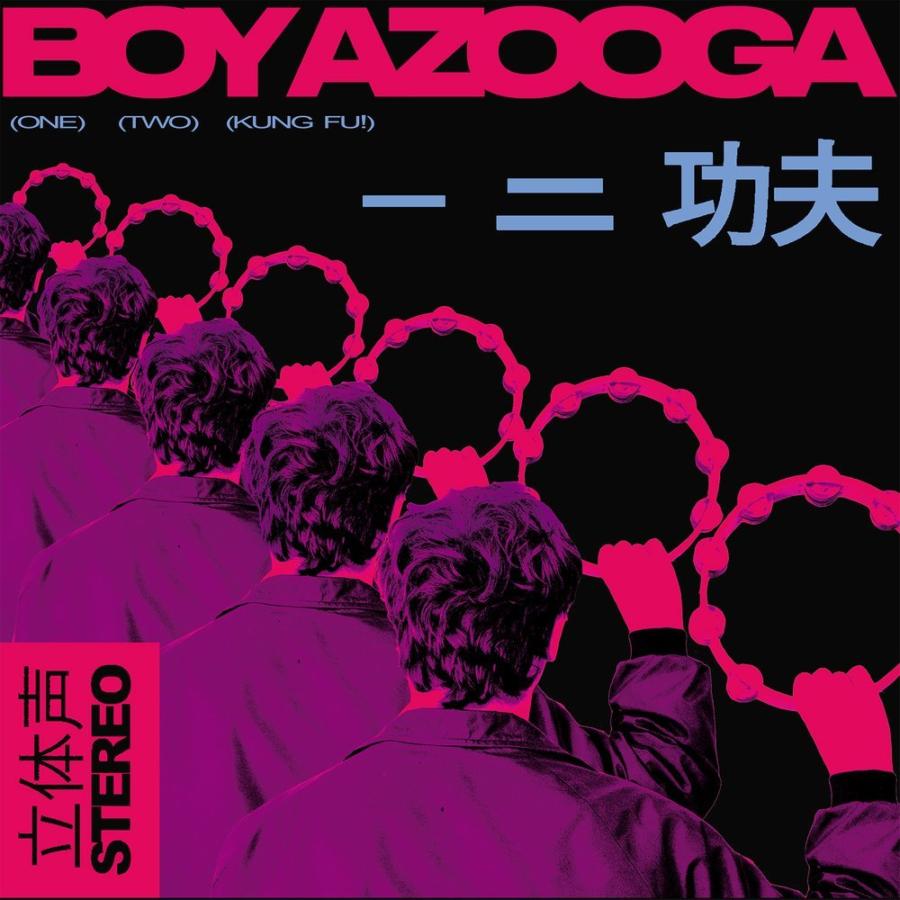 ‘1, 2, Kung Fu!’, the debut effort from Welsh band Boy Azooga, is an enjoyable indie debut splattered with electronica and psychedelia.

Super Furry Animals, Can, Sly & The Family Stone, Black Sabbath, Beastie Boys and Ty Segall are just several influences for the eclectic songwriter and Welshman Davey Newington: the frontman, guitarist and brains behind Boy Azooga and their debut 1, 2, Kung Fu!. Additional members include Sam Barnes (bass), Dylan Morgan (keyboards) and Dafydd Davies (drums). Sifting through Newington’s background makes one realise just how much musicality he has inherited. Firstly, his parents met whilst both playing in the BBC National Orchestra of Wales, and one of his grandfathers was a jazz player and drummer for the Royal Marines. Growing up, Newington started playing the drums when he was six and played in numerous jazz bands and Welsh orchestras. Most recently, he sat behind the kit for Charlotte Church’s cover band Late Night Pop Dungeon.

1, 2, Kung Fu! is an album that “is not all one thing for sure”, according to Newington. “The whole point of Boy Azooga is to be a celebration of loads of different types of music. I wanted the album to be more like a mixtape or something. We wanted to include loads of contrasting styles”. This is demonstrated wholeheartedly on the album’s most outstanding track ‘Face Behind Her Cigarette’, which opens with Morgan’s bright and catchy keyboards before the bass and guitars deliver a funky and vivaciously groovy riff. As Newington eerily sings “The face that no one can forget / Is the face behind her cigarette”, the listener hears the satisfying sounds of a maracas and tambourine kept in time with the beat of Davies’ kick drum.

The minute-long ‘Walking Thompson’s Park’ contains more distant vocals from Newington which oozes ‘60s-inspired, LSD-fuelled psychedelics. This sets up the track ‘Jerry’, another album highlight, which refers to his dog judging by “And you ran so far, I couldn’t hear you bark”. Furthermore, the single’s cover art depicts a picture of a dog with the chorus line “Where did you go to get that smile?” written in parenthesis underneath. Newington’s guitar and vocal structures on are compassionately uplifting and the lyricism seems to illustrate of one of Newington’s memories of walking his dog Jerry through Thompson’s Park near Cardiff. ‘Breakfast Epiphany II’, another minute-long composition, allegedly drew its stimulus from The Beach Boys, specifically the track ‘Don’t Talk (Put Your Head On My Shoulder)’. Like ‘Walking Thompson’s Park’ introduced ‘Jerry’, ‘Breakfast Epiphany II’ introduces ‘Taxi To Your Head’ which celebrates the more electronic proclivities of music. Artists like Soulwax, particularly their work on From Deewee released last year, spring to mind regarding the very moving percussive and rhythmic aspects of the track.

The story Patrick Hamilton’s classic novel Hangover Square is uniquely encapsulated by Newington in his song of the same name. The story is set in London at the start of World War II and tells the tale of the self-disparaging protagonist George Harvey Bone and his hopeless desire for a woman called Netta (“How could someone like you be so difficult to find”). This was the first song written for the album, and one gets the sense that it is deeply personal to him. Proceedings are rockier on the excellent recent single ‘Loner Boogie’ which recalls The Black Keys’ classic ‘Lonely Boy’. The slightly fuzzy but no less muscular and tight guitar riff is enjoyable throughout its two-minute runtime. The same guitar tone is redeployed on the finale ‘Sitting On The First Rock From The Sun’ which breaks away from its mellow and undistorted beginnings in its concluding moments and, consequently, ends the album with a high sense of fulfilment.

The only drawback argument that could be made is the idea that this album is a diversely musical project – it isn’t. Just to clarify, this isn’t a bad thing, but Boy Azooga don’t really do anything over and above emphasising the “contrasting styles” of psychedelia and electronica, with hints of rock in a couple of places. Nonetheless, 1, 2, Kung Fu! is still a solid and enjoyable debut and a recommendable listen for music fans. (7/10) (Harry Beynon)

Listen to 1, 2, Kung Fu! by Boy Azooga here via Spotify, and tell us what you think below!