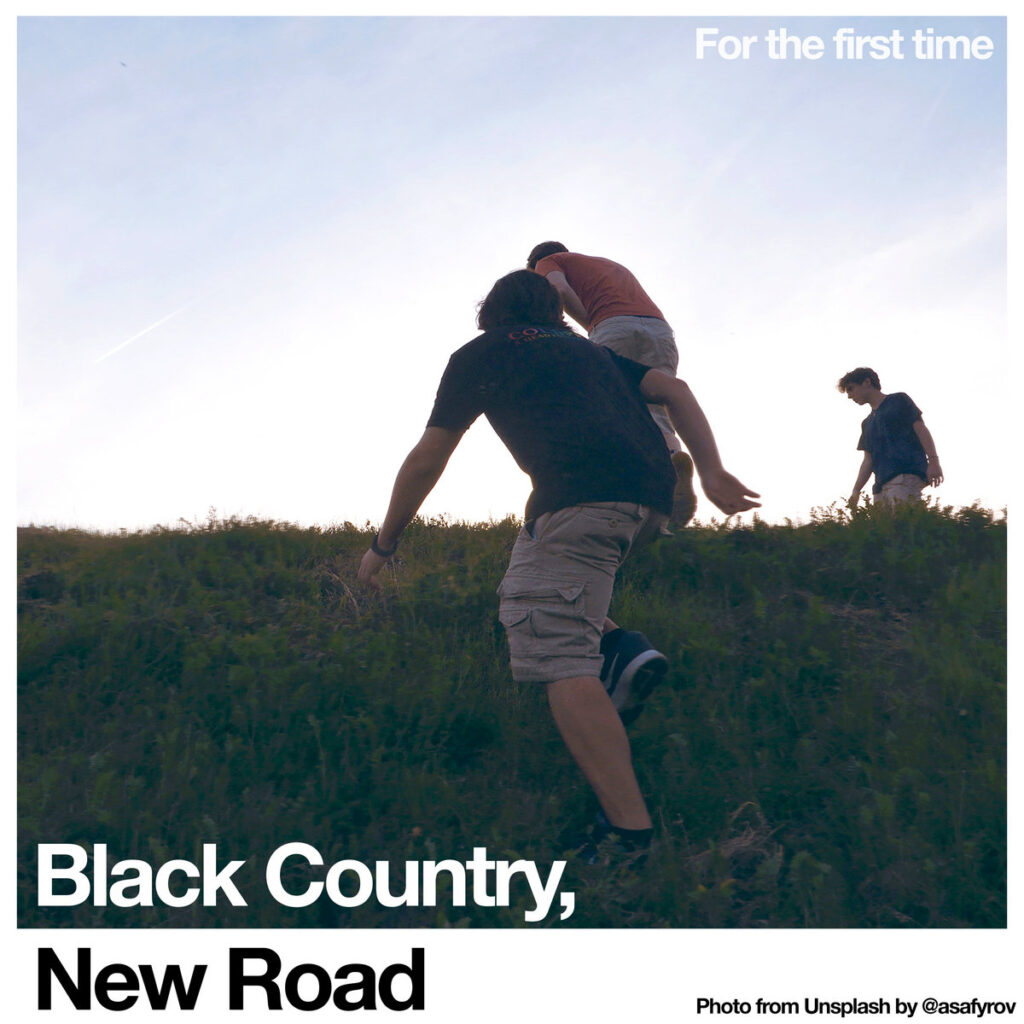 Pulling post-punk, krautrock and jazz into thrilling new shapes, Black Country, New Road’s ‘For The First Time’ is one of British indie’s finest debuts for years.

It’s with a strike of guitars and tumbling drum beats that Black Country New Road’s highly anticipated debut For The First Time begins, followed by synths that sound like an old Nokia phone, before a dark, foreboding, yet subtle guitar riff seeps in. The cacophony of sounds builds up, crashing cymbals speed up the pace, and haunting wind sections set the scene, like the beginning of a Hitchcock masterpiece.

Before you’ve even had a moment to digest ‘Instrumental’, the sounds reach fever pitch. The pacing, the sounds, they build up more and more. Even though it is so excellently played, it runs along like a steam train, constantly on the verge of collapse. It feels so on-edge all the time that sounds that were once dominant in the song’s early stages become so enveloped that the climactic end feels like it’s suffocating and then…

For an opener, it’s pretty intense. You feel lost in a whirlwind of tension, constantly worrying that the song will envelop you too. ‘Instrumental’ is a humongous statement.

‘Athens, France’ similarly reaches fever pitch early on, then it slows down in its middle section. Its guitars become a tornado, whirling around until you feel lifted off your feet, but so slowly that you don’t even realise it. “Why don’t you sing in an English accent?” sings Isaac Wood, as the song slows down even more, it’s guitars softly floating along. You feel tense, as Isaac sings of his disastrous 2018 and “all that (he) lost”. Twinkly guitar chords at the songs end represent a new sound, perhaps similar to the journey that Isaac found himself on, so far away from home, in the song’s lyrics.

The tension builds up again in ‘Science Fair’. A song about meeting and falling in love with a girl at “the Cambridge Science Fair”, the song takes a dark turn when Isaac admits that he could have escaped the science fair unattached, alongside the self-deprecating comment of “the second best Slint tribute act”. It becomes less about the girl, and more about this vicious cycle of self destruction that Isaac finds himself on, as with most Black Country, New Road songs. The song builds like a horror movie, or a dream sequence. The song’s structure is broken but it works with the song so well. Lewis Evans, the band’s saxophone player, is central to this song’s effect, the saxophone playing like a whirling, hopeless string of pain. By the songs close, you feel like you’re falling, wasting away, only to be revitalised by the best song on the album. And one of the best post-punk songs of the decade.

Taking influence from bands like the aforementioned Slint and Indian Summer, ‘Sunglasses’ rolls in, at first, softly. A gorgeous riff that simply whirls in your head, so softly and so sadly, filled with so much emotion. “Welcome to best new six-part Danish crime drama”, Isaac says, sarcastically, clearly describing nights spent inside, bored, in a relationship with no passion and boredom. As soon as the saxophone comes in slowly, and the lyrics talk about the most mundane subjects, like juicing watermelons, as Isaac feels that he is becoming his partners father, describing the “absolute pinnacle of British engineering”. He whispers this with so much hatred; he knows what he has become, but knows that this is what he’ll always be.

By the time the song breaks down, another cacophony, now, of whirling saxophone lines, it’s mesmerising slowness is all but lost, instead replaced with a post-punk riff seemingly ripped straight from the hallowed pages of Wire. A driving bassline matches the song, and again the saxophone steals the show. “And there are so many roadmen on this street, and they cannot tell that I am scared”. The song builds up again, to a crashing climax. Caterwauling drums, dissonant guitars. It’s so close to punk, it might as well be.

Yelling “leave my daddy’s job out of this” remains one of the song’s most powerful lines, spitting venom at the middle class with so much British anger. It’s a song that fits 2021’s political climate so perfectly, yet could also be so suitable for the ‘70s, ‘80s or ‘90s. Black Country New Road may not be as upfront with their politics as bands like IDLES or Shame, instead replaced with the huge instrumentals and even bigger breakdowns that post-punk miss out on so often. The album replaces jagged politics with carefully constructed character studies. The music video to ‘Sunglasses’ perhaps best representing this, with the song being soundtracked by hundreds of random pictures, some including sunglasses, some not, but all featuring individual stories and tales behind them.

For The First Time ends with ‘Opus’. Its soft saxophone fading in like the end of a movie, before hammering drums take the song up to the band’s usual quick paces. It ends with a dramatic gut punch towards the end. As with the album’s first track, it reaches fever pitch, before slowing back down, slow violins rolling in, skronking saxes slowly dying, the song slowing down until… silence. It brings the curtain down on one of the most consistently, dazzlingly ambitious debut albums that British indie has offered in many years, and one of the most well-executed. (9/10) (Harrison Kirby)

Listen to For The First Time by Black Country New Road here via Spotify, and tell us what you think below!