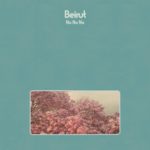 Front cover of ‘No No No’

As the celebrated songwriting force behind the infrequently operational outfit Beirut, Zach Condon has always given his music a different international flavour for each project. He moved from the Balkan folk-influenced Gulag Orkestar to the graceful orchestral flourishes of 2007’s The Flying Club Cup in little over 12 months, before overhauling the sound for 2009’s March Of The Zapotec / Holland double EP. All three projects were among the most rewarding pieces of indie in the second half of the noughties. But lately, Condon has been having a bit of a rough time. Since 2011’s The Rip Tide, in which he dialled Beirut’s cosmopolitan folk-stylings back to a pretty standard, unthreatening New York indie template, he’s suffered the dissolution of his marriage and what was rumoured to be a full-blown mental breakdown amid a bout of writer’s block while on tour in Australia in 2013. Having recovered and returned to the studio, Beirut’s fourth album proper No No No has been vaunted as a back-to-basics exercise.

Given that Condon has in the past scored music for 19-piece Mexican brass bands, perhaps “simple” shouldn’t be used pejoratively to describe anything he records under the Beirut name, but No No No is noticeably more straightforward and functional than anything he’s done in the past. Emerging out of ‘anything-goes’, relaxed jamming sessions in the studio, it consists of nine songs that clock in at under half an hour. In the context of the turmoil of his recent hindered creativity, this is probably a necessary manoeuvre, but there is still a clear link to his old music. The likes of ‘Gibraltar’, with its structure of pianos, bongos and handclaps, is the kind of ersatz, homespun music that Condon’s been making his entire career, only deliberately left with its inner workings exposed, rather than massaged and tinkered with through endless takes, revisions and edits in the studio. ‘As Needed’, despite its bleakness, could pass for an early ‘70s Beach Boys track, and the counterpoint between the ice-cool keyboards and Condon’s bleak vocal on ‘Perth’ also show this unfussy approach.

This isn’t to say that Condon has lost, or deliberately left out, his ability to weave clever music – it’s just more immediate and less subtle than before. The glinting melodies and harmonies on the wonderful title track, followed consecutively by the resplendent trumpets of ‘At Once’, ‘August Holland’ and, near the end, the shifting tempos of ‘Fener’ show this – short, punchy and accessible left-field pop that could stand a real chance of mainstream exposure. Certainly, if you were to recommend a starting point for a newcomer to get into Beirut, you would cite this new album. For older fans, unfortunately, No No No is let down by a couple of moments of perfunctory filler, like the mid-tempo ‘Pacheco’ or the rather disappointing shuffle of final track ‘So Allowed’. Its very short length is also rather unsatisfying, particularly after a four-year wait for new material. But seen as a whole, No No No is nevertheless an interesting portrait of Condon as a pop communicator, forgoing the complex beauty of the kind of arrangements that have made him so celebrated in the past in order to speak plainly and find himself again. It may come to be remembered merely as an exercise, but it’s a worthwhile one. (6/10)

Listen to No No No here!