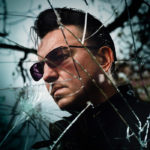 Is there anyone out there who doesn’t like Richard Hawley? Following his breakthrough to wider awareness with his Mercury-nominated fourth album Coles Corner in 2005, I personally cannot recall a single pundit, review or casual music fan speaking about the former Pulp and Longpigs man in anything other than glowing terms. For Hollow Meadows, he continues his long-standing theme of naming his albums after areas, landmarks or features in his native Sheffield – this title refers an area where Hawley’s ancestors are believed to have dwelled as far back as the 13th century. It’s his eighth solo album, and very likely to be his last this side of fifty, so given his gradually snowballing popularity it’s somewhat surprising to hear Hawley beating a retreat from the expansionism of his last two albums and returning to what is, to put it bluntly, his comfort zone.

Fans of the sprawling Truelove’s Gutter (2009) and the brooding, rock guitar menace of Standing At The Sky’s Edge (2012) may initially be disappointed at the familiarity of Hollow Meadows, but that very quickly fades away when you hear just how damn good Hawley is at doing what he does. It’s a return to the widescreen, wind-swept balladry of Coles Corner, and even the introspective, late night noodlings of his earlier, lesser-known works like Lowedges. His quavering, cracking voice is the central attraction of the opener ‘I Still Want You’, as he sings “sorry I been away so long / just needed a little more time” over a spare, delicate arrangement of acoustic guitars and subtle, achingly romantic sweeps of violin. Aside from a couple of rocky, amped-up moments that change the atmosphere at just the right time, like first single ‘Heart Of Oak’ and ‘Which Way’, we stay very much in this mood and setting throughout Hollow Meadows, but it’s an intoxicating, twilit world to nestle and luxuriate in for hours at a time.

But more than just the atmosphere is the impeccable, timeless quality of Hawley’s songwriting. On the likes of ‘Serenade Of Blue’ or the waltz of ‘Sometimes I Feel’, you’re dealing with a tone and vocal range and delivery of somebody who could have sounded just as at home in the days of shellac 78s as digital downloads, something that’s immensely difficult to achieve without sounding corny or patronising. Hawley’s oaky baritone is like a warm embrace – a sturdy shield from the fast-paced blur of modern life yet human enough to sound vulnerable. The haunting album highlight ‘Nothing Like A Friend’ builds tension with extremely judicious use of bass guitar penetrating the skin of the song, just like Spiritualized’s epic ‘Oh Baby’, as he sings the repeated refrain “the things that hold us in / are gossamer thin”. On ‘Long Time Down’, he infuses things with a hints of gospel, Americana and even some flourishes of Spanish guitar playing.

As if it really needed to be proven, Hollow Meadows is yet another re-statement of Hawley’s brilliance, and of his exquisitely realised songwriting and craftsmanship. While it sees our hero reverse the sonic trajectory of his last two albums and return to the lilting, low-key romance of ten years ago, it’s no less ambitious structurally. Where some may end up criticising it for turning away from the boundary-pushing he had been doing, in terms of style it’s also Hawley’s most varied record to date, and another splendid album from an artist who can seemingly do no wrong. (8/10)