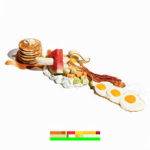 Four years ago, New York’s Battles dealt with the departure of their former lead singer Tyondai Braxton by hiring a number of guest vocalists for their thrilling second album Gloss Drop, giving it the feeling of a compilation or mixtape rather than a studio album. It soft, pliable sound, missing the sharp, angular edges of the group’s 2007 debut Mirrored, but was terrific, bizarre fun nonetheless. For their third record La Di Da Di, Battles aren’t even acknowledging Braxton’s absence, choosing to lay down a dozen instrumental tracks and operate exclusively as a three-piece. This may be unchartered territory for them, but paradoxically, although La Di Da Di dispenses with vocals altogether, it feels much more like a successor to their debut than Gloss Drop’s ‘rotating frontmen’ schtick.

While they may no longer have any vocal outlet in order to project themselves into the pop world – however awkward and incongruous that presence was in the first place – Battles have attempted to maintain their identity by making themselves more abstract and rhythmically tricky. Back when they started, Braxton’s pitch-shifting, gibberish vocals worked more effectively as another instrument in the mix, rather than as a device to drive a narrative forward, and it’s this missing element that Battles are trying to resolve for the first time in their career. Lead single ‘The Yabba’ was extremely promising, an elliptical, non-linear structure where various competing elements of twisted guitar and pointed synths emerge and recede over its seven-minute length. With all these interlocking elements making a churning, combustible whole, it seemed as if Battles were returning to first principles – however, just one other tracks is as satisfying as this. ‘FF Bada’ is a math-rock behemoth of brain-boggling proportions, as brittle synth and guitar lines fold and expand as they both battle for prominence, with John Stanier’s furious drumming driving the whole thing along at an increasingly fast pace.

For the rest of the album, however, Battles forget to deliver a pay-off at the end of their experiments. ‘Summer Simmer’ starts well but never gets out of third gear, not accessing the higher plateaus of their previous work despite its near six-minute length, which is most disappointing. The same goes for the light math-rave of ‘Non-Violence’, though it does boast some pretty muscular bass. ‘Cacio E Pepe’, which sees the group opt for some unusually proggy-sounding guitars, ends up being inert. The much slower, almost mechanical funk of ‘Megatouch’ works better for being less cluttered up with experimentation, but still retains the cerebral qualities we’ve come to expect from the band. ‘Tricentennial’ passes by in a whirlwind of bass and drums jousting for prominence but, again, fails to peak. Interestingly, the shorter interludes of the synth v. drums brawl of ‘Dot Net’, its flashier companion piece ‘Dot Com’, and the mind-bending syncopations of ‘Flora > Fauna’ are more effective than the longer sonic explorations elsewhere on the album.

La Di Da Di, while intriguing, simply isn’t compellingly strange enough for all except the most hardened fan to return to again and again in order to figure them out. The song arcs are less random – when Battles find their groove, they now tend to settle down with it rather than adding to it or searching for new inspiration every two minutes – meaning that the some of the group’s inherent attractiveness has gone. There’s also a slight issue with accessibility, as there’s no longer any singer to offer the first-time listener a way into the more imposing constructions. You certainly wouldn’t recommend it ahead of its two predecessors in order to introduce a newcomer to Battles. But La Di Da Di is still distinctively their work and nobody else’s, and they’ve proven that you don’t need a vocalist to have a voice. (6/10)