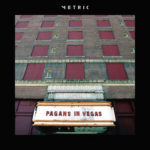 Front cover of ‘Pagans In Vegas’

Long gone are the days of indie rock hits from Toronto’s Metric. With old tracks including ‘Monster Hospital’ and ‘Gold Gun Girls’ they became a recognised name nearly ten years ago, if only as minor hangers-on to the indie scene throughout the mid-noughties, and were a reasonably consistent indie rock band capable of an enjoyably throwaway sets for early afternoon slots at festivals. Now onto their sixth record the quartet treaded water for a long time but have now re-positioned themselves as purveyors of electronic influenced pop in the States.

The title of the record, Pagans in Vegas, suggests that they are showing the bird to the major electronic mainstays on the Vegas music scene. Metric have shed their indie rock skin on this record and the gradual transformation over the last three years has resulted in a number of arena size shows since their 2012 synth-influenced record Synthetica. Similar to Metric’s previous releases, it has its moments of brilliance but has little to remember, which makes it hard to warm to. The distinct highlight is the first single from the album, ‘The Shade’, reminiscent of CHVRCHES’ Lauren Mayberry with its strong vocal delivery backed up by modular rhythms and a stuttering drum beat.

The current pop industry is obsessed with a synth-backed soundscape and this has led to what many would criticise as a bland, watered-down crop of bands overpopulating a marketplace. Many pop bands have fallen foul of this and Metric just about avoid teetering off the edge on this record. There’s a distinct over-reliance on modular synths throughout and Emily Haines’s vocals simply become an auto-tuned afterthought. ‘Celebrate’, ‘Fortunes’ and ‘Blind Valentine’ all fall short of expectations.

‘The Face part I’ and ‘The Face part II’ make for an unexpected but satisfying end with a two part electronic instrumental reminiscent of Brian Eno’s ethereal organ-style hymnals. It’s a bold ending but it is the highlight of a rather bland record. Whilst their reputation is intact, this effort sounds like a band looking back, rather than forwards. Their willingness to play around with the soft edges of their sound is admirable, but Pagans In Vegas is a frustrating listen. (4/10)

Listen to Pagans In Vegas here!