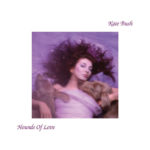 Front cover of ‘Hounds Of Love’

If you were to compile and average out all of those articles that you see from time to time that profess to list the greatest records ever, it’s quite possible that Kate Bush’s fifth album Hounds Of Love would end up as the highest-ranking record by a British female solo artist. As well as containing some of Bush’s most memorable and highest-charting singles, it very quickly came to be regarded as a classic by reviewers and the record-buying public alike, helping to land its creator four BRIT Award nominations in 1986, at that point a record for a female artist. Not only has it stood the test of time, with Bush’s mystique growing in her increasingly long absences in recording in the thirty years since, but it’s often held up as a kind of yardstick for other female singer-songwriters.

Her debut album, 1978’s The Kick Inside, was released when she was 19, and featured songs written when she was just 13, rather incredibly. Her first ever single ‘Wuthering Heights’ rocketed her to immediately to the top of the charts and to national stardom. Though it was littered with examples of her precocious talent for arrangements, lyrically The Kick Inside reflected the tender age of its creator, studded with teenage fantasies and new age-isms. While commercial success on the same scale was hard to come by afterwards, with that debut single acting as something of an albatross when careless reviewers and the public at large came to analyse her subsequent three albums (Lionheart [1978], Never For Ever [1980], The Dreaming [1982]), she improved greatly as a songwriter. However, after the critical panning administered to the last of those records, she retreated from public life for almost all of 1983.

Tabloid reports of her ballooning in weight during that time were totally wrong – she had in fact been building her own 48-track studio at her home in Kent in order to combat a bout of writer’s block, and began working on tracks for her new album at the start of 1984, with the entire process of writing and production in her hands. Though she chose an unusual and rather rudimentary process of using the demo recordings, overdubbing and mixing them – as opposed to re-recording again and again – until they sounded as she wanted them to. Using the comparatively new technology of the Fairlight synthesiser to touch up the production and sequence the rhythm sections, the process took the best part of 18 months, but the result was the strongest collection of Bush’s career. She had been threatening to break free of the shackles of the pop song template for some time, but, particularly on the second side of Hounds Of Love, she finally burst out beyond its confines and into uncharted territory.

Lead single ‘Running Up That Hill (A Deal With God)’, probably the most successful hit she had had since ‘Wuthering Heights’ seven years before, sets the tone for album’s first half ‘Hounds Of Love’, which functions as a kind of “greatest hits” section full of sensual pop. A stunning mini-epic all on its own, it was heralded at the time as her finest work. The galloping, stirring and yet oddly restrained drumming, programmed by Bush’s long-term collaborator Del Palmer, that drives the song is a thing of majesty, as she sings a lyric about the male and female genders only truly understanding each other if they could swap places.

The gnarled, gothic nightmare-scape of the title track, legendarily covered by The Futureheads in 2005, is about the sensation of being afraid to commit yourself to love, manifested in the metaphor of being chased by a pack of hounds. The innocent, childlike wanderlust of ‘The Big Sky’ features the only guitar of the album, and the all-encompassing atmosphere of ‘Mother Stands For Comfort’ follow this brace of singles and are slightly fuller sounding. The tension between the themes of safety and danger on ‘Cloudbusting’, a magnificently ornate piece of avant-pop with its lyric concerning the philosopher and psychologist Wilhelm Reich and his son Peter, challenges the listener and yet is uncluttered enough to be perfectly accessible.

Following that arsenal of heavy-hitters came something altogether more sinister, artful and deeply moving. A seven-song suite entitled ‘The Ninth Wave’ formed the second side of Hounds Of Love, and formed a natural dividing line that the CD and digital issues of the album have naturally failed to convey to the first-time listener. Genuinely, the only way for its impact to hit you fully is to have to get up, flip the vinyl over and begin playing the second side, because Bush’s intent was to communicate ‘The Ninth Wave’ as a self-contained little universe. She intended the seven songs to tell the story of a person drifting at sea, alone, overnight, with a series of memories and visions from the subject’s past and future visiting to keep him conscious and awake until he is rescued.

However, the meta-connections are more abstract than that, as the songs do not at first appear to have any connection to each other aside from the fact that they would seem to be arbitrarily stuck next to each other. Upon repeated listening, you begin to realise that ‘The Ninth Wave’ is arguably the most intelligently conceived sequence of music in pop history. The desperately sad yet siren-like ‘And Dream Of Sheep’, surely one of the saddest songs ever recorded, begins the movement, with the cocoon-like ambience shifting unnoticed into ‘Under Ice’, a wholly uneasy experience underscored by the distorted electric violins stabbing through the mix.

‘Waking The Witch’ is a retreat into child-like, fairytale terror, with the alarmingly distorted backing vocals jolting the listener into attention, and this bleeds into the sedate beauty of ‘Watching You Without Me’, as if the song’s protagonist is wondering about the loved ones he/she will leave behind. The whirling, Celtic folk of ‘Jig Of Life’, with thunderous drums, rallies the collection, before the beautiful chorale of ‘Hello Earth’, its theme taken from the traditional Georgian song ‘Tsintskaro’. Final track ‘The Morning Fog’ brings things to a restrained ending. Again, it seems like a challenging experience at first, but no description can ever truly do ‘The Ninth Wave’ justice – the minutiae of each moment is given the same attention as the overall arc of the narrative. Bush challenges her listeners, but the record’s success goes to show that, even 30 years later, not enough artists on major labels use (or are allowed to use) their platform to do such a thing, instead preferring to tick boxes avoid the path less trodden.

Hounds Of Love was the point at which Bush subverted the public’s impression of her, overthrowing the major label system for her own ends, taking complete control of her identity just at the point at which people had thought that she had lost it. The four excellent music videos for its singles also helped put across how much expressive and confident she was this time around. This experience would inform the mentality of the strong-willed, independently minded artist refusing to bend to label pressure that has operated ever since. It’s a dramatic and unashamedly romantic tour de force, and though it borrows sounds from all of the British isles it has an unmistakable, quintessentially English outlook. An intoxicating fusion of classical, operatic, tribal and modern pop styles, with Bush able to communicate the idiosyncrasies of each without coming across as a culturally insensitive dilettante, Hounds Of Love finally confirmed her as a preternatural talent, the likes of which we’ve arguably not seen since.

Listen to Hounds Of Love here!