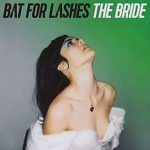 When Bat For Lashes released a collaborative single with Toy, a cover of Iranian psychedelic cult hero Amir Rassaei’s ‘Aroos Khanom’ back in 2013, a track that translates as ‘The Bride’, not many people will have realised this was the beginning of a new album cycle for Natasha Khan. But from the odd early formation The Bride, the fourth LP from the Londoner is perhaps her most effervescent and cinematic to date. It’s intended to be the soundtrack of a future film where a grieving bride copes in the aftermath of her beloved being killed on his way to their wedding. ‘I Do’ opens proceedings with delicate harps and the reliably, breathtakingly grandiose vocal of Khan as she tells the beginning of her tale the day before the wedding, “Tomorrow you will take me for your bride / and know that grey skies will blow away”. The track may only be two minutes long but it sets the tone for the record perfectly.

Each track develops on the bride’s character excellently; ‘Honeymooning Alone’ begins with the sound of a car crash, and Anna Calvi-styled guitars give a harsh steel to the track as Khan begins the journey to self-discovery. The vulnerability of the harps return to show the fragile state of the bride to conclude as she questions “If I drive far enough will I find my love?”. The Bride may not have the standout moment of ‘Laura’ on The Haunted Man or ‘Daniel’ from Two Suns, but it does have the excellent pop of ‘Sunday Love’: an upbeat sounding track which captivates the listener and takes away from the overt sorrow.

The truth of the matter is that The Bride doesn’t need a standout moment, the whole overarching story is what is so captivating as an excellent psychological narrative. The old comparisons of Khan with Kate Bush and Lykke Li still remain, but the Bat For Lashes project has long since emerged out of the shadows of its influences; ‘Widow’s Peak’ is the mature older sister to Lykke Li’s ‘The Trumpet In My Head’, while the preceding ‘Close Encounters’ harks back to Bush’s 1985 ‘Watching You Without Me’ with constant ethereal imagery surrounding.

The story of The Bride ultimately is one of redemption and eventual acceptance as the titular character overcomes sorrow. The minimalistic ‘I Will Love Again’ sees the bride reassure herself that she will be able to find new love, before the final two tracks seem to depict her content in the fact she may not as the imagery of the rain speaks of sadness and the waiting for a time when she can return to the groom’s arms. The Bride is a truly excellent concept that has resulted in Khan’s most complete album to date. It has been a long time coming, but when the result is as beautiful and intelligent as the 53 minutes of The Bride is then it is more than worth the wait. (8/10)

Listen to The Bride here via Spotify, and tell us what you think below!