REVIEW: Band Of Horses – ‘Why Are You OK’ (Interscope) 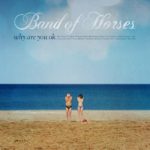 To say that Band of Horses have been the victims of their own hype would be a fair statement based on the amount of expectation put on the then-Seattle-based band. Debut album Everything All The Time saw the band soar to the attention of mainstream media, because of both the excellently crafted folk-tinged rock (see ‘The Funeral’) and of the back story of lead vocalist Ben Bridwell (google it…). But after missing the mark with their audience with the radio-friendly Mirage Rock in 2012, the five-piece fell from the limelight with not much said in spite of its positive reviews. Now, four years wiser the South Carolina based band are back and with new ideas coming from producer Jason Lytle (formerly of Southern-tinged indie masters Grandaddy), Why Are You OK should pass the test with both an old and new audience.

Opening track ‘Dull Times / The Moon’ is aptly split into two titles, and in doing so, sets the tone for the entire album. The minimal melancholy, pushed along by a trademark vocal from Bridwell is remarkable as always in the ‘Dull Times’ side, while a more obvious rock sound is taken in ‘The Moon’ – the fact that the two are pushed into the same song is a clear nod to producer Lytle, but the track serves as the perfect mantra for the album. There are hints of ‘Dull Times’ during the folksy ‘Hag’ and ‘Lying Under Oak’, a delicate sound which comes across as free flowing and beautiful –like so much of Band of Horses’ previous work.

The criticism of Band of Horses always keeping everything safe is fair, but that’s just where Bridwell is at in his life – everything is safe. Why Are You OK is inspired by family life (the name comes from an innocuous question his daughter asked) and there aren’t many rock efforts that could sound so content and assured in itself, in spite of its, at times, bland topics. The more valid criticism of Band of Horses here would be the occasional inability to demand attention; a couple of tracks wash over passively and feel like filler as a result at times. Perfect examples of this would be the 71-second synth-infused ‘Hold On Gimme A Sec’ and the acoustic ‘Whatever, Wherever’, two tepid tracks which do nothing for the album. Still, there are more good moments than bad and the Augustines-sounding ‘In A Drawer’ (featuring a vocal from J Mascis) is an emotive piece of garage rock which would sound good on any stage.

It’s been 10 years since Band of Horses released that much-loved debut, and since then the band have been lauded and scalded in equal measure for their continuous ability to make stadium targeted indie-rock and nothing has changed here. Simply put: if you’re a fan of Band of Horses, enjoy –and if you’re not, then there is nothing to see here. (7/10)

Listen to Why Are You OK here, and tell us what you think below!