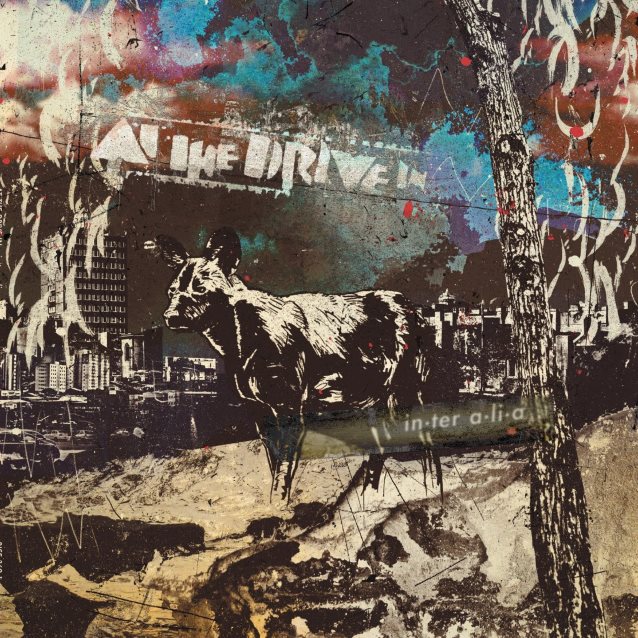 At The Drive-In’s first recorded music in 17 years is a worthwhile exercise, but ‘in·ter a·li·a’ doesn’t ever really come close to their finest moments.

What is it with comeback albums in 2016 and 2017? The Jesus & Mary Chain, Soulwax, Jamiroquai, Metallica… …they are everywhere! But as comeback albums go, no one was expecting a reunion quite like this. Post-hardcore cult heroes At The Drive-In have released their fourth studio album in·ter a·li·a, an astonishing 17 years after the release of the magnificent Relationship Of Command (2000) which is #30 on this publication’s ‘The 200 Greatest Albums of the 2000s’ list. The lineup for in·ter a·li·a is identical to that of the original solidified quintet except for Keeley Davis replacing Jim Ward on guitar. For the longest time, no one deemed this reunion possible but then again, we all thought the same with Guns N’ Roses and The Stone Roses and look what happened. Who’d have thought that vocalist Cedric Bixler-Zavala and guitarist Omar Rodriguez-Lopez would step back their old post-hardcore shoes. Isn’t that why At The Drive-In disbanded in the first place? If this is to be a one-off album, will it fall below acceptable levels or nostalgically triumph?

For those who are unfamiliar with the band, they have a rather legendary cult status for metal fans and indie kids – even to this day. The mesmerizing single ‘One Armed Scissor’ is by far the most reminiscent for hardcore fans. After At The Drive-In split up, Bixler-Zavala and Rodriguez-Lopez went on to form The Mars Volta and record numerous brain-frying LPs; but De-Loused In The Comatorium (2003) and Frances The Mute (2005) are widely recognised as noughties prog-rock staples.

Critics consider the former to be one of the greatest concept albums in existence. It truly is a thrilling listening experience about the protagonist Cerpin Taxt inducing himself in a rat-poison/morphine coma. It defies conventional music formations with ‘Drunkship Of Lanterns’ being the experimental centrepiece. This album is also on ‘The 200 Greatest Albums of the 2000s’ list at #93. Frances The Mute was inspired by Rodriguez-Lopez’s love for collecting old TVs and mostly watching Akira Kurosawa films. It would be rude not to also give surmountable credit to the 12-minute extravaganza ‘L’Via L’Viaquez’; with blistering guitar solos from Rodriguez-Lopez and neuron-stimulating vocals from Bixler-Zavala.

So, what about the remaining three fifths of the band? Jim Ward (guitar), Tony Hajjar (drums) and Paul Hinojos (bass) went on to form Sparta where they fastened to the same artful, post-hardcore ATD-I recipe, with Ward picking up the mic. The distance between them and their Mars Volta brothers on the music spectrum, if you will, was mindboggling. Imagine if Bixler-Zavala and Rodriguez-Lopez had stayed and At The Drive-In recorded a post-2000 album – would it have resembled even an ounce of the quality that came from Relationship Of Command? Probably not as De-Loused In The Comatorium affiliates this.

Like their El Paso counterparts, Sparta also endured critical acclaim with their debut Wiretap Scars (2002). Tracks ‘Cut Your Ribbon’ and ‘Collapse’ reminisces ATD-I’s debut Acrobatic Tenement (1996) with that all-encased contrast of hard-hitting punk riffery and inciting mellow guitar melodies. Porcelain (2004) is equally ear-punching and Threes (2006) was decent but lacked that raw edginess, particularly in the guitar tones. In other words, it felt sanitised, naked, and regressive somehow.

Now that the mini-history lesson has concluded, in·ter a·li·a needs to be urgently devoured and investigated. If there’s any track that should be met with adulation, it’s the second single ‘Incurably Innocent’. The song touches on speaking out about sexual abuse as depicted by “a blank tape that couldn’t remember / But you can never erase the hurt.” Rodriguez-Lopez’s sonic, pump-driven guitar is infectious throughout and Bixler-Zavala voice, although not what it used to be, is still compelling. The other previously releases singles ‘Governed By Contagions’ and ‘Hostage Stamps’ are more of the same but the latter highlights Hajjar’s sensational drumming, that he’s managed to nurture over his 20-year career.

One of the more forgettable moments on in·ter a·li·a would be ‘Torrentially Cutshaw’ because it offers nothing of communicable significance. By the time the listener has reached this song, they’ve already heard it once or twice previously. Ultimately it feels illicitly over-recycled and could have been left out. Conversely, ‘Holtzclaw’ cements its position with clever natural harmonic picking techniques from guitar wizard Rodriguez-Lopez. ‘Ghost Tape No.9’ is one of the special compositions on this album as At The Drive-In bring something entirely different musically and lyrically. Lines like “But the ultimatum clots a tapeworm hymnal” and “Exchanging currents through modicums of pernicious lust” convey Bixler-Zavala’s surreal vocabulary and intelligence as a lyricist. What these lyrics/messages mean proves to be quite the head-scratcher.

Musically, Hinojos’ bass infiltrates here and on ‘Call Broken Arrow’, where, additionally, the guitar work lets loose on very Mars Volta-esque distortion. For a comeback album as big as in·ter a·li·a, Hinojos’ tone needed to perhaps be louder and denser to give the album a brawny and intangible attribute. The opening track ‘No Wolf Like The Present’ lacks vocal potency and the authoritative high-pitched intonations from Bixler-Zavala but the muscular instrumentation and formidable energy from the other band members follows through nicely. Inversely, ‘Tilting At The Univendor’ is a vast improvement in terms of vocals and filled with beautiful guitar riffs and drum beats.

To match Relationship Of Command’s cult status would have been close to impossible even if At The Drive-In hadn’t have split so soon afterwards, never mind a 17-year gap. Even the most ferociously talented groups in history rarely manage to bottle lightning to that extent, and the challenge brings to mind a modern footballer trying to match Pele’s goal-scoring record. Unfortunately, in·ter a·li·a does not even scratch the surface. Don’t get me wrong though, the album is a valiant effort in the ATD-I catalogue. Bixler-Zavala’s lyrics are as cultivating as they have always been and the album itself is far from disappointing in its own right – only by comparison. ATD-I may have not quite achieved the levels of past entries with in·ter a·li·a, but it has been a thoroughly worthwhile exercise. (6/10) (Harry Beynon)

Listen to in·ter a·li·a here via Spotify, and tell us what you think below!