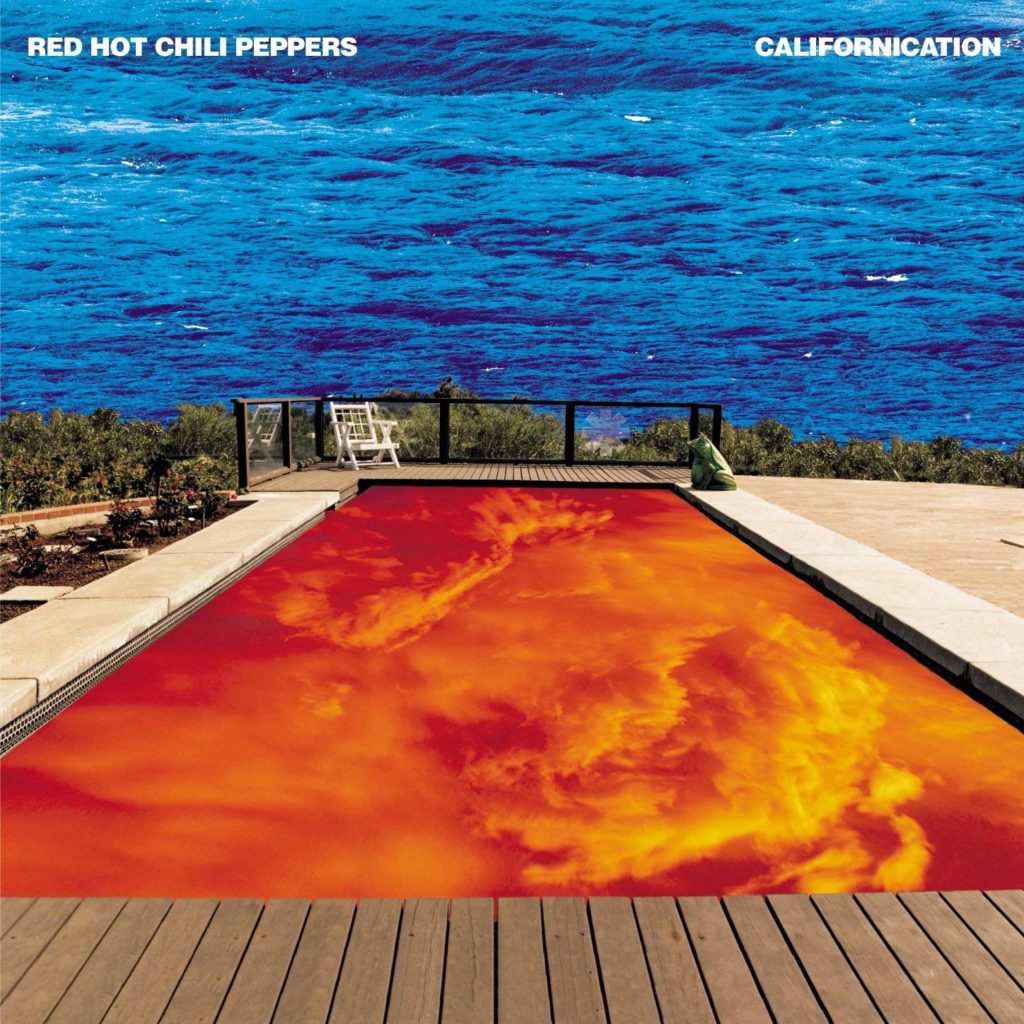 Before the globe-conquering success of their 1999 album Californication, notorious Californian funk and alternative rock band Red Hot Chili Peppers were in a state of turmoil towards the end of the Nineties. Earlier that decade, then guitarist John Frusciante had become very uneasy with the band’s notoriety due to the success of the RHCP classic LPs Mother’s Milk and Blood Sugar Sex Magik, and quit in 1992. In the years following his departure, he became a heroin and cocaine addict and would eventually end up in rehab in January 1998 after years of poverty-stricken misery. Furthermore, lead singer Anthony Kiedis, who had been sober for several years prior, once again became addicted to similar substances. Jane’s Addiction guitarist Dave Navarro filled in for Frusciante when the band recorded the superseding album One Hot Minute, a record that met with a divided reaction.

It was clear from the get-go that Navarro had a very different impact on the band’s songwriting, with a much heavier, quasi-metal aesthetic imbibed on several tracks like ‘Warped’ and ‘One Big Mob’. What transpired was a significant decrease in album sales and a breakdown in Navarro’s relationship with his bandmates which eventually saw him fired, all despite the somewhat ample success of the single ‘Aeroplane’. By 1998, the Chilis were in a dark place.

In a last-ditch effort to save the band, bassist Flea (born Michael Peter Balzary), who is to date RCHP’s only constant member, went to see Frusciante in rehab and invited him to re-join. Gratefully, he accepted Flea’s invitation. Frusciante’s injuries, due to his drug abuse was severe to say the least, including tooth replacement with dental implants, permanent scarring on his arms and nose reconstruction. Aside from his solo releases in the Nineties (which include 1994’s Niandra LaDes And Usually Just A T-Shirt and 1997’s Smile From The Streets You Hold), Frusciante had barely picked up a guitar since his departure.

However, while jamming in Flea’s garage, he quickly rediscovered his talents and now RHCP were ready to write what would become their most commercially successful album to date. It was aptly titled Californication, and was once again produced by the iconic Rick Rubin, who had been a key player in helping RHCP zero in on their alchemy and identity with Blood Sugar Sex Magik nearly a decade before.

With the nu-metal craze dominating MTV, rock charts and guitar music generally at this point, alternative rock was on the back foot by 1999. While people who felt disenfranchised from and were angry with mainstream society welcomed this craze, others criticised the movement for being over-saturated and for sacrificing music for image. Californication, along with Foo Fighters’ There Is Nothing Left To Lose released in the same year, served as a breath of fresh air and as a statement that alternative rock was not only still relevant, but more original and exciting in many cases.

The key to RHCP’s success has always been their primary fusion of hard rock with funk which has, for the most part, made them stand out from the crowd. Unlike bands like Oasis and Sex Pistols, who were clearly defined as Britpop and punk, respectively, RHCP have never really belonged to any distinct movement. Having said that, artists like Faith No More, Living Colour and Fishbone were also gaining traction in the late Eighties and Nineties by mixing hard rock with elements of funk but in their own unique fashions. The point that needs to be emphasised is that RHCP are a very eclectic group, and no two albums of theirs have ever stylistically sounded the same. Naturally, Californication thrived off this notion, on top of the creative reunification with Frusciante.

The concept of Californication is essentially about Los Angeles and Hollywood, and the city’s engrained relationship with sex and drugs. This narrative is surveyed most openly on the well-known title track. The song’s lead melody and Frusciante’s unusually mellow guitar solo are so unbelievably simple yet so iconic to RHCP fans everywhere. But it’s thought-provoking lyrics like “Celebrity skin is this your chin? / Or is that war you’re waging?” and “And buy me a star on the boulevard” that make ‘Californication’ one of a kind. They highlight the attraction and appeal of the Hollywood lifestyle, despite the numerous fake and shallow rudiments that escort it. “And Cobain, can you hear the spheres / Singing songs off ‘Station To Station’” refers to Kurt Cobain’s suicide and Bowie’s influence on the Nirvana frontman. It’s a reminder that the Hollywood way of life can be difficult to mentally process and that being famous has its pitfalls.

The Grammy-winning and anthemic single ‘Scar Tissue’ also triumphed in its simplicity with a lush finger-picked melody from Frusciante. Plus, he uses a guitar slider in the solo which adds a lovely sense of flow and ambience. Kiedis’ lyrics once again impress with the hook “With the birds I’ll share this lonely viewin’” which could be interpreted as him reflecting on his place and purpose in life amidst his recovery from drug addiction.

Californication’s opening track ‘Around The World’ begins with Flea’s gravelly, earth-shaking bassline before Chad Smith’s drums follow suit with crashing cymbals galore and Frusciante brings a whirlwind of guitar mania. This is then contrasted with a catchy and funk-inspired guitar line that precedes the verse. ‘Get On Top’ acts in a similar vein with more chunky basslines, thrashing drums and ear-penetrating wah-pedal guitar passages. The funkiness and infectious groove of this song leaves very little to be desired and was engineered by Frusciante after he had listened to, and was enthused by, Public Enemy.

‘Parallel Universe’ and ‘Easily’ utilise more conventional rock tempos that eschewed the kernels of funk and so does what could arguably be considered Californication’s magnum opus ‘Otherside’. While the music itself consists of captivating, upbeat verses and choruses that progressively get louder and more intense, it disguises what is a bleak but renewed outlook on heroin addiction. Observing the lyrics “A scarlet starlet and she’s in my bed / A candidate for my soul mate bled / Push the trigger and pull the thread” paints a picture of a needle being injected into Kiedis’ arm and giving the listener a sense of just how attached he is to the substance. Put together all the songs that have been covered thus far in this review and the result is a golden collection of tracks that make up the first half of Californication. But the album’s second half contains many of the band’s best deep cuts.

‘Porcelain’ sets the tone for the second half and foreshadows a more experimental side to the band’s songwriting. The song was inspired by Kiedis’ encounter with a young mother at a YMCA who was struggling to simultaneously take care of her daughter and get clean from her drug addiction (“Do you carry the moon in your womb? / Someone said that you’re fading too soon / Drifting and floating and fading away”). While Californication is deserving of classic status, there are admittingly a couple of moments of filler which come in the form of ‘This Velvet Glove’ and ‘Savior’. The former feels like a reiteration of what has been heard already and the latter’s song structure is slightly disjointed, but they are not terrible songs by any means.

While the songs ‘I Like Dirt’ and ‘Purple Stain’ are very likeable in terms of their funky rhythms, the lyrics are very tongue-in-cheek and scattered with innuendos that are either funny or ridiculous, depending on who you ask. ‘Emit Remmus’ (or ‘Summer Time’ backwards) contains one of Flea’s most underappreciated basslines and Frusciante’s sustained high notes in the background are oh so hard-hitting. The subject matter revolves around Kiedis’ brief relationship with Melanie C back in ‘98 when the Spice Girls were hitting the big time. Closing the album, ‘Right On Time’ ensconces the listener yet again in the dreamland of funk and the perked-up acoustic ballad ‘Road Trippin’’ ends the album in high spirits where another indication points at Bowie with “Big Sur we take some time to linger on / We three hunky dories got our snakefinger on”. Although the song’s performance as its fifth single was underwhelming by comparison, it speaks to Warner’s determination to cash in on Californication’s success that they were still mining it for singles in March 2001, a whole 22 months after ‘Scar Tissue’ had come out.

Californication is undeniably a somewhat flawed album, admittedly. But then again, not every classic album is necessarily perfect, and it’s the cultural impact that usually counts. Californication would go on to sell 15 million copies worldwide and, as of 2016, was certified 7x platinum by the RIAA, making it one of the most commercially successful alternative rock albums of the Nineties. Not only did it succeed with Rubin’s magisterial production and with the return of Frusciante, but also their willingness to mature and experiment which, for the most part, worked. Moreover, there is more than meets the eye when analysing Kiedis’ lyrics, which don’t necessarily hold one exact meaning. As a side note, it is baffling that the track ‘Quixoticelixer’, released on the deluxe version, was not included in the album’s original tracklisting. Californication would go on to influence numerous bands – who have blended reggae, funk and hip-hop with rock and extract multiple cues that this album invented – like 311, Forfun, Fun Lovin’ Criminals and Sublime. In addition, modern day pop and electronic artists like Magic! and Kygo have also been inspired by this album, and RHCP generally.

Red Hot Chili Peppers would embrace yet more critical and commercial acclaim with By The Way in 2002, and the 2006 double album Stadium Arcadium which saw Frusciante’s guitar work climb to sensational standards on tracks like ‘Don’t Forget Me’ and ‘Dani California’. But he soon after left the band once again to pursue his solo career. In came Josh Klinghoffer, who has since recorded I’m With You and The Getaway with RHCP. Both received mixed reactions from fans, but nonetheless sold millions of copies. The band have never lost sight of their Sly & The Family Stone- and Funkadelic-inspired roots despite each album fluctuating in sound and aesthetic. People could argue for months on end about whether Californication is the crème-de-la-crème of RHCP’s catalogue, but they will agree that it is a mandatory purchase and a crucial milestone for rock music as the new millennium was just around the corner.

Listen to Californication by Red Hot Chili Peppers here via Spotify, and tell us what you think below!