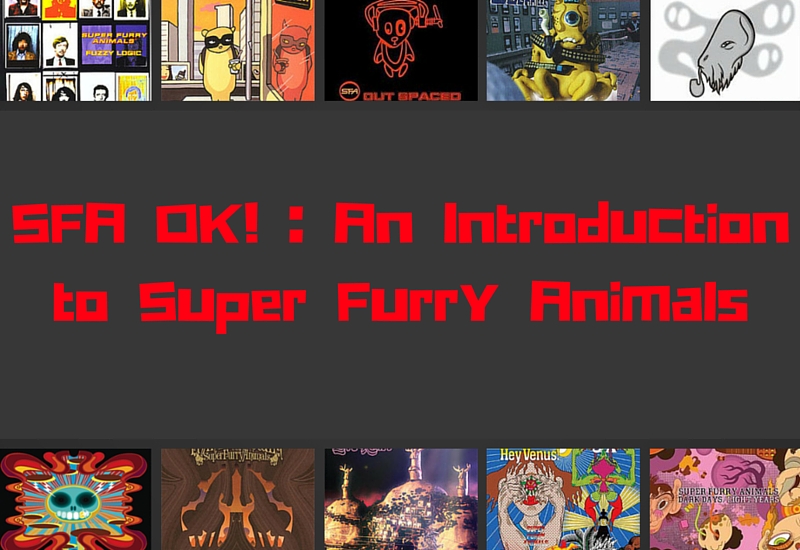 With their debut studio album marking its 20th anniversary of its release in May 2016, it is well beyond time that the Super Furry Animals were recognised as the geniuses they are. With the exception of the globe-conquering success of Radiohead, the Furries are the most original and consistently inventive British indie group of the last quarter of a century. Arguably the last great Creation Records band and certainly the last decent group to emerge from the increasingly artistically moribund Britpop scene in early 1996, SFA have always sought to defy categorisation.

Finding joy and inspiration in equal measure from everything from Burt Bacharach to rave and techno music, Neil Diamond to lo-fi American indie, The Beach Boys to Japanese death metal, SFA proved themselves to be intelligent and creative interpreters of all manner of musical influences, injecting everything with their own trademark sensibilities. Colliding with this was a keen eye for presentation, both audio and visual, and their live concerts quickly gained a strong reputation, lavish feasts for the eyes and ears. Their 13-year run of nine studio albums – and one amazing B-sides collection – constitutes one of the most acclaimed and beloved back catalogues in recent memory.

There was a duality to SFA’s personality as a band – staunchly international in their philosophical approach to music and wider culture, they sung in their own accents and often in their native language (memorably on the Welsh-language-only Mwng, which was praised in the Houses of Parliament). They balked at the idea of being pigeonholed as part of any scene, and consequently they existed all by themselves – their own nation state of the Furries, borderless, geographically non-specific and equally at home anywhere in the musical world.

The tension of this central paradox provided them with enough creativity to release challenging, forward-thinking yet remarkably fresh and accessible pop. The late ‘90s and early ‘00s represented their commercial peak, yet artistically they’ve rarely lapsed below the extremely high standards they set themselves right at the beginning of their career, and their status as cult favourites has long since been secured – perhaps illustrated by the statistic that no other artist has had more UK Top 40 hits than SFA without ever hitting the Top 10.

Sprouting out of the Cardiff-based music and fashion collective Acid Casuals and taking their name from a T-shirt manufactured by the group, Super Furry Animals’ five members had previously belonged to various defunct bands in the area, coming together in early 1993. Lead singer Gruff Rhys came from the regionally successful punk/electronica outfit Ffa Coffi Pawb, drummer Dafydd Ieuan from the embryonic version of the band that went on to be Catatonia, and programmer Cian Ciaran from the techno madcaps WWZZ, and bassist Guto Pryce and guitarist Huw Bunford from the Welsh-language punk band U Thant. One of the first iterations of SFA even included actor Rhys Ifans on lead vocals!

Having rehearsed for the best part of two years and signed to Cardiff indie label Ankst, Llanfairpwllgwyngyllgogerychwyrndrobwllllantysiliogogogoch (In Space) EP – a shameless attempt to get the band into the Guinness Book of Records – was their debut release, which drew attention after minimal touring. They were then snapped up by Creation Records, the most prestigious indie label in Britain in the ‘90s and newly flushed with cash from the recent success of Oasis, shortly after the release of their last Ankst EP Moog Droog in October 1995. Let loose in a fully-equipped studio for the first time, Fuzzy Logic was their debut full-length, released in May 1996.

Ever since, their career has been characterised by imaginative PR stunts – including hiring a tank with an in-built soundsystem to defy the Criminal Justice Bill over illegal raves, video/DVD albums, 50ft. inflatable bears, and the sweariest single in chart history (the Steely Dan-sampling ‘The Man Don’t Give A Fuck’) – but most importantly, glorious, unique and incredibly consistent pop music by the bucketload, which allowed them to stay relevant and ahead of the game as their Britpop contemporaries fell by the wayside, broke up or went stale. Details of the carnage, and what they were allowed to get away with during their time with Creation, are laid out in Ric Rawlins’ excellent 2015 book ‘Rise Of The Super Furry Animals’.

All went quiet in 2009 after they unleashed Dark Days / Light Years, a return to form after a couple of albums in which one felt they weren’t quite pushing themselves as hard as they used to. Having reunited in early 2015 for a short series of gigs and festival appearances, and with a brand new single ‘Bing Bong’ released just a few weeks ago, firmly rooted in their oddball electronica beginnings, the future is once again bright for the Super Furries and their passionate army of fans.

Continue reading on page 2 for our in-depth guide to SFA’s discography!

Have a listen to our ‘Introduction to Super Furry Animals’ playlist on Spotify here!