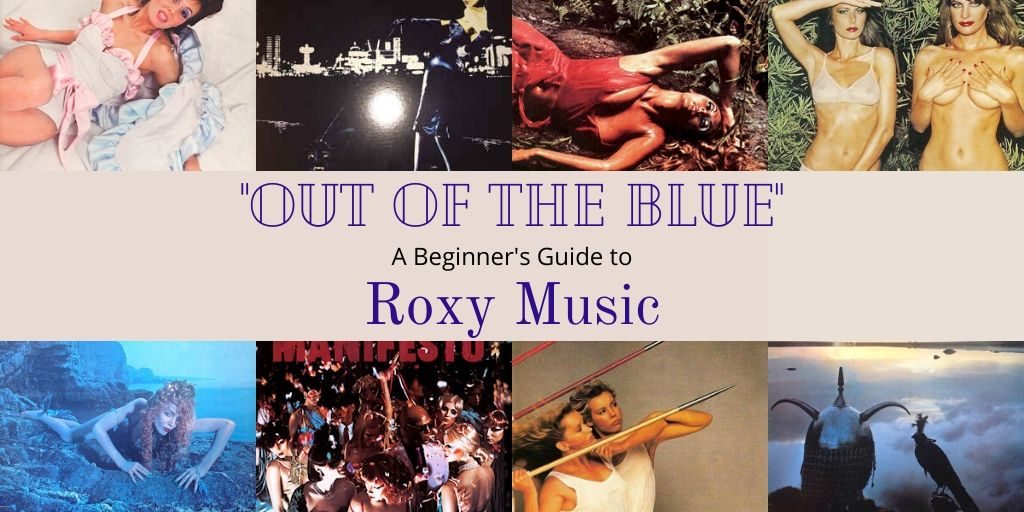 At a point when rock and pop music’s most legendary artists and bands are being increasingly commemorated in re-issue campaigns, reunion tours and think pieces, Roxy Music seem conspicuously overlooked. It seems to be one of the most glaring collective oversights from a music industry mining the past for financial sustenance, as they were not only incredibly influential on British pop’s evolution, but enormously popular too. A great deal of their success admittedly could be explained by serendipitous timing, but their talent made them soar far above any suggestion of cheap novelty.

Emerging in the early Seventies, a time period marked by instantly disposable glam-rock and the onset of increasingly disconnected, bloated progressive rock, they and David Bowie practically stood alone in the early Seventies, beacons of sophisticated yet accessible pop. Roxy Music’s art-rock siren blared through the post-Sixties, post-hippie hangover, heralding the start of the Seventies as a sonically distinct era. The prioritization of style, glamour and artifice led by their charismatic yet enigmatic lead singer Bryan Ferry – sometimes at the expense of the music itself, their critics argued – presaged the image-based revolutions in pop in the Eighties catalysed by MTV and the New Romantic movement. After their reformation in the late Seventies, they became a more conventional (slightly) and more commercially successful outfit (definitely), culminating in the hugely famous album Avalon.

But for all that, Roxy Music were quite hard to pin down and define, and weren’t as completely alien as they’re typically regarded. While viewed as an antithesis to the denim-clad blues rockers and the haughty over-technicality of prog-rock, their self-titled debut contained a six-part medley about World War II experimenting with musique concrète. They were held up as a diametrical opposite to the earnest, often joyless authenticity of the experimental/folk underground of the post-hippie era promoted by John Peel at the time, but it was in fact Peel who was one of Roxy’s earliest champions. Ferry and his future bandmates, Phil Manzanera, Andy Mackay and Paul Thompson, all came from progressive music backgrounds, viewing the first iteration of Roxy Music as a halfway point between Bowie and King Crimson. It was only really Brian Eno, a non-musician armed with tape effects and synthesisers, who was completely untutored, emphasising the importance of how a musician does something rather than what he does, of ideas being more valuable than technique. Ferry, as well, didn’t let his lack of expertise at the piano get in the way – using his art school training, he began writing songs in an unusual, off-centre manner that was completely refreshing, full of jarring cadences and dissonances that allowed them to amplify the archness, irony and post-modernism of their message.

It’s worth remembering that, despite the success of the Beatles and the Stones, Ferry and Roxy Music emerged at a time when the idea that pop music could be serious, considered as worthy as traditional high art forms, was far from established in wider culture. ‘Pop music’ was a freighted, pejorative term, often deployed by critics to place it alongside what they regarded as trashy, mass-produced and lowbrow forms of culture such as cartoons or comic books. Their first few albums contained a great deal of oddly structured material – ‘Virginia Plain’ and ‘Pyjamarama’, their first two singles, contained no choruses – that didn’t fit any kind of established hit factory formula. When they achieved practically overnight success, they faced a lot of complaints that they hadn’t “paid their dues” by building up a fanbase through years of performing in small venues.

Nevertheless, they were good enough to cut through that fusty criticism, surrounding themselves innovators in the fields of management, graphic design and photography to present a complete package. ‘Virginia Plain’ seemed to telegraph the entire aesthetic of Roxy Music into a sub-three minute missile and into the heart of the UK Singles Chart. A stylish collision of pop art with pop music, with lyrics combining the real with the imaginary and exuding ‘50s American kitsch and effortless cool, it was a genre-busting bomb of a hit that has a claim of being the most influential pop single in British chart history, essentially inventing art-pop at a single stroke. Some bores hung up on notions of authenticity felt that Roxy Music’s meteoric ascent was a case of contrivance over content, but they were simply wrong. As David Buckley so eloquently summed it up in his fantastic biography of the band The Thrill Of It All, while Roxy Music appropriated from the past in much the same way as glam-rock did, what was different was that “they were so unexpected, so rehearsed, so archly quoted, rather than simply borrowed, that they sounded articulate and new”.

After Eno departed in mid-1973, Roxy Music’s subsequent evolution was inextricably bound up with that its lead singer, Bryan Ferry. In a very curiously Seventies way, he essentially willed himself to greatness, inventing and projecting his own image from art-school upstart to suave, jetsetting Adonis via archly romantic playboy over the course of decade of virtually unparalleled greatness. He may be forever fixed in the public’s mind as the “sultan of suave”, a Noel Coward-esque aesthete – check out the front cover of his 1974 solo album Another Time, Another Place – but he was much more chameleonic than many gave him credit for. The paradox of one of pop’s most cutting-edge outfits being fronted by someone who seemed to channel James Bond or Frank Sinatra was an intriguing and sometimes infuriating one, with Ferry often seeming to push the irony a little too far, particularly in his solo work, but it all remained true to his muse.

Many felt he got too sincerely drawn in to the jetsetting lifestyle that he had originally intended to parody and mimic, but all of this highly stylised posing and non-stop performance might have been too much to bear if Ferry wasn’t also one of the most effective singers of his generation. Not great, necessarily, mind, but undisputably very very good at communicating the emotional cores of Roxy’s songs. The weariness of Ferry’s delivery made self-awareness pierce through the veil of confidence and bravura like a shaft of light, illuminating a hidden truth.

When the band returned from their three-year hiatus with 1979’s Manifesto, the pop world had changed almost entirely. The re-launch started extremely unsteadily indeed – comeback single ‘Trash’ limped to a lowly no.40 in the UK Singles Chart – but Roxy Music quickly rediscovered chart success and embarked on the most commercially successful period of their careers during their final four years as a band, including a cover of Lennon’s ‘Jealous Guy’ which became their first and only Number One single in 1981. There was still something of the sweeping romanticism of material like ‘A Song For Europe’ in the grandiose expressions of sentiment in later tracks like ‘Dance Away’ and ‘Same Old Scene’, albeit less cluttered and more meticulous in their execution. By the time their eighth and final album Avalon came out in 1982, a decade after their debut, Ferry and Roxy Music had essentially transformed into a completely different group on a surface level, but the same love of sophistication, artistry and intelligence still underpinned it.

Check out our Beginner’s Guide to Roxy Music playlist here via Spotify, and take a short trip through their albums by clicking to the next page below!