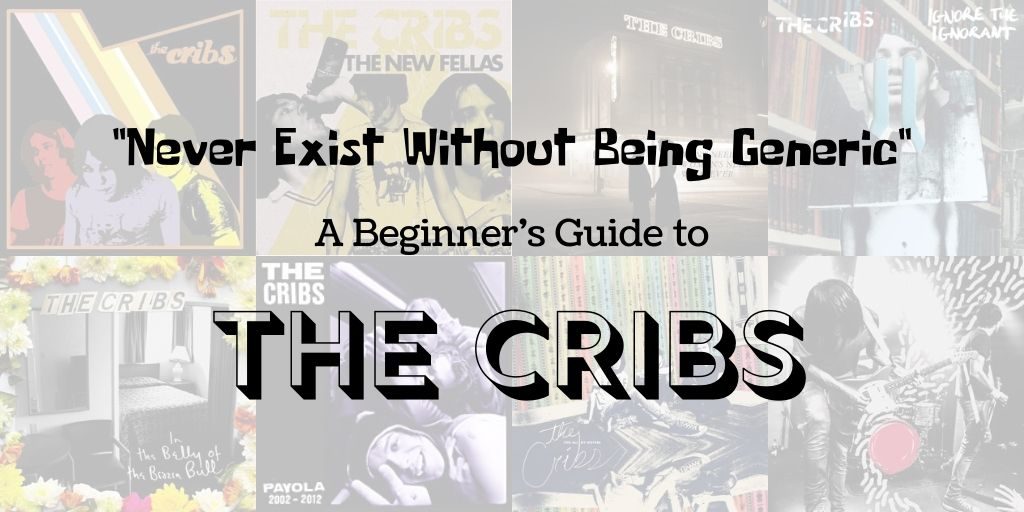 Recorded mostly in a burst of seven days at Hackney’s Toe Rag Studios using analogue, 8-track technology and hitting no.96 in the UK Albums Chart, The Cribs’ self-titled debut is extremely modest in comparison to all of its successors, coming across as a group still testing the limits of their talents. It also sounds very much of its time, the Jarmans’ innate knack for melody striving to be communicated in the face of the boxy, claustrophobic nature of the recording quality. Yet, despite these limitations, all of those qualities are endearing and enduring ones that make The Cribs curiously ageless. It’s home to live fan favourite ‘Another Number’ and spirited garage/indie-rock tracks like ‘You Were Always The One’ and ‘The Lights Went Out’, but not that much else of note. However, The Cribs would quickly master their art and do much better. (6/10) (LISTEN)

With one of the band’s all-time heroes in Orange Juice’s Edwyn Collins behind the production desk to bring out a sharper, more highly defined version of The Cribs, The New Fellas was a marked improvement on its predecessor in terms of focus, intent and song quality. The band’s first bona-fide anthem in ‘Hey Scenesters!’, plus other chaotic garage-rock Exocet missiles in ‘I’m Alright Me’, ‘Mirror Kissers’ and ‘The Wrong Way To Be’ made it a short but massively enjoyable album. With the likes of ‘It Was Only Love’ or the live-recorded ‘Haunted’, the Jarmans also demonstrated a more tender side to their artistry, something not present on their essentially uniform debut.

It initially didn’t perform that much better than The Cribs, peaking at a lowly no.78, but intense touring and the selection of several fantastic singles from it, all of which breached the UK Top 40, meant that The New Fellas represented a key breakthrough, a moment at which The Cribs truly started to accumulate their loyal fanbase and distinguish themselves from the morass of similar sounding bands that had emerged at roughly the same time. (8/10) (LISTEN)

Having put in the hard yards with their first two albums, Men’s Needs, Women’s Needs, Whatever was the watershed moment for The Cribs, the point at which they soared when so many of their British post-Libertines counterparts from 2004 were faltering or fading rapidly into irrelevance. Selecting Franz Ferdinand’s Alex Kapranos for production duties was a masterstroke – he left The Cribs’ songwriting and arrangements alone, but buffed out the group’s more shambolic musical tendencies to make something just a little cleaner and radio-ready. Added to that were a number of more American new-wave influences, from Weezer to The Cars, giving everything just that extra layer of professionalism.

Side one of Men’s Needs… reads like a concentrated greatest hits: the razor-sharp riff of ‘Men’s Needs’; the middle finger to their contemporaries ‘Our Bovine Public’; the fully-rounded melodic glory of ‘Moving Pictures’ are among the best British indie tracks of the decade. Into side two, we get brilliant experimentation in the form of ‘Be Safe’, featuring a spoken-word part Lee Ranaldo from the group’s heroes Sonic Youth, and the elegiac acoustic moment ‘Shoot The Poets’. A perfect mixture of left-field guitar pop and excoriating punk wit, it’s usually the album that most Cribs fans, both hardcore and casual, will cite as their best. (9/10) (LISTEN)

While touring Men’s Needs… in America, a chance meeting with Johnny Marr (former Smiths guitarist and at that point a member of Modest Mouse) led to an immediate friendship being struck between him and the band. Meeting up for a speculative jamming session with the intention of a one-off EP in early 2008, their connection was such that Marr joined The Cribs permanently. Landing highly sought-after producer Nick Launay to produce a new album as a four-piece, the Mancunian indie legend offered a certain gravitas to buttress the Jarmans’ raw enthusiasm and big choruses on the resulting Ignore The Ignorant.

The melodious, infectious riff of ‘We Share The Same Skies’, the introspective ‘Last Year’s Snow’ and the choppy ‘City Of Bugs’ all represented impressively different variations of The Cribs’ template, but the adrenaline-fuelled indie of ‘Cheat On Me’ and ‘We Were Aborted’ were there to reassure long-term fans that The Cribs hadn’t changed too drastically. It perhaps isn’t the most immediately accessible Cribs album, but it’s certainly the most accomplished for newcomers. Breaching the UK Top Ten, the augmented Jarmans were on the brink of proper mainstream stardom. (8/10) (LISTEN)

The Jarman brothers had come a hell of a long way in the first decade of their existence, from a decent but fundamentally sound-alike garage rock outfit toiling the nation’s indie circuit to nationwide arena tours, gold-selling albums, critical acclaim and including a former member of The Smiths in their ranks. But for their second decade, a major re-think was needed. Ryan Jarman’s struggles with heartbreak and physical and mental health were beginning to take their toll, and their garrulous garage-rock anthems had unwittingly attracted a knuckle-dragging lad element into their fanbase – their 2009 UK tour saw distasteful sexist chants directed at reformed punk legends The Slits, whom the Jarmans had specifically selected as support.

In The Belly Of The Brazen Bull, then, was a strategic retreat for The Cribs, a restatement of identity and first principles. Parting ways amicably with Johnny Marr, they reverted to a three-piece once again, recruiting producer Dave Fridmann to put together their most ambitious and uncompromising album yet. It consisted of some of their noisiest and most abrasive songs yet – the inferno of ‘Back To The Bolthole’ being the most notable – but they didn’t completely forget the sing-alongs, demonstrated by ‘Come On, Be A No-One’. The likes of ‘Glitters Like Gold’ and ‘Confident Men’ also saw the Jarmans more fully embrace their indie and punk-rock influences. Oh, and it was topped off with an Abbey Road-esque song suite at the end. (8/10) (LISTEN)

Vying to retain their place at the top of British indie’s top tier, for their sixth record The Cribs aimed at balancing their twin competing tendencies of melodic accessibility and punk-inspired rawness. To that end, they deployed The Cars’ Ric Ocasek behind the production desk, and the result was slightly reminiscent of Sleater-Kinney’s finest moments, or Weezer’s flawless 1995 cult classic Pinkerton, the perfect balance of cerebral, funny, catchy and plain rockin’. Just like that album, For All My Sisters reveals its qualities to you over several listens, as you become accustomed to the pummelling delivery of the music to detect the pop characteristics underneath.

What was most immediately notable was that Ryan, normally regarded as the frontman, ceded co-lead singer duties to bassist Gary to a much greater extent than on previous Cribs albums. Together, they guide the listener through catchy pop-punk like ‘Different Angle’ and ‘Spring On Broadway’ to anti-anthemic moments like ‘An Ivory Hand’ or the grunge power of ‘Mr. Wrong’, many of which have a distinctly feminine aspect, or themes of not conforming to type. It all culminates in the stunning seven-minute closing track ‘Pink Snow’, easily one of the best individual tracks in the band’s catalogue. For All My Sisters is an album of subversive pop spoken in the language of DIY indie, and still stands as the most accessible thing they’ve done since Men’s Needs….  (8/10) (LISTEN)

Re-convening with legendary Nirvana, Pixies and PJ Harvey producer Steve Albini in late 2016 to finish working on leftover songs from the …Brazen Bull sessions four years previously, what was initially intended to be an EP grew into a full-length album project. In many ways, 24/7 Rock Star Sh*t was the record that one imagines the Jarmans had wanted to make all their lives. As its title suggested, they’re still observing and commenting from the sidelines and the underground, the way they always have done, only this time virtually all melody and commercial appeal are backgrounded or eliminated altogether, with unembellished power the order of the day.

As is Albini’s trademark, the production is scuffed, abrasive and percussive, with distortion dialled up and Gary’s bass parts emphasised. The tracks have an appealingly uncalculated, live-in-the-studio feel, heightening the emotion of big choruses in ragged pieces like ‘In Your Palace’ and the all-out assaults of ‘Year Of Hate’ and ‘Rainbow Ridge’. In stark contrast, however, there’s acoustic beauties like ‘Sticks Not Twigs’ to balance out the mood, proving that Albini’s talents aren’t restricted to noise-making. Despite the many qualities to recommend it, 24-7 Rock Star Sh*t is likely to be looked back on as a curio, as something that The Cribs needed to get out of their system. (7/10) (LISTEN)

Tags: Beginner's Guide, For All My Sisters, Gary Jarman, Ignore The Ignorant, In The Belly Of The Brazen Bull, profile, punk, Ross Jarman, Ryan Jarman, The Cribs, The New Fellas