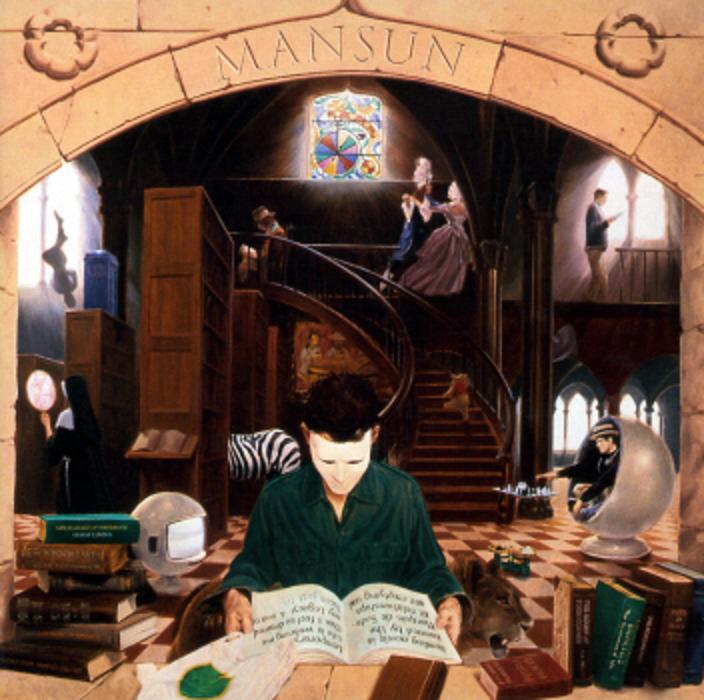 You’ve emerged from total obscurity to score one of the Britpop era’s strangest chart-topping albums inside of two years – what do you do next? If you’re Mansun, you double down on the template of your initial success and make a magnum opus of prog-rock-influenced indie to challenge your fanbase and the wider public. Attack Of The Grey Lantern, released in February 1997 to great critical acclaim and an impressive commercial reaction, had been lumped in with the dying Britpop scene, but its creators were always more arty and cerebral than compared to the populist tendencies of most mid-Nineties practitioners.

Mansun’s follow-up album, 1998’s Six, is possibly the most baffling and complex musical statements made by a British guitar band on a major label. Even in the 20 years after its release, few groups have chosen to take such a risk – in this case, a 70-minute conceptual album dealing with philosophy, politics, depression, social alienation and nightmarish dystopian futures, all set to their own personal brand of glam-/prog-/space-/bubblegum-rock, consisting of mini-song suites and nine-minute epics. 20 years ago, its nearest precedent was Manic Street Preachers’ 1994 album The Holy Bible, the decade’s other monolithic masterpiece of disgust and despair in British guitar music.

One can only imagine what the bosses at Parlophone must have thought when presented with the rough sketches for Six – but although the Nineties gets an occasional bad rap, you simply can’t imagine a major label giving the green-light to a voluminous, misanthropic masterwork in the 2010s from, say, Mumford & Sons or Bastille. The top-end of the industry has long since stopped taking gambles like this. Which is why the sheer audacity and batshit mental-ness of Six, and Mansun’s brief, glorious but doomed career arc, ought to be celebrated.

Compared to the tongue-in-cheek humour that often characterised Attack Of The Grey Lantern and lent it a levity that made it a goldmine for hit singles, Six is an almost unremittingly sombre affair, and difficult to truly unlock even after several listens. Dumping the satirical characters and the comparatively simple guitar pop, their new record included practically every element of modern rock (at least, as it existed by the end of the Nineties) Six dealt with a patchwork of almost uniformly negative human emotions, from obsession, disorder, depression and alienation. You’d at least reach out on social media to Paul Draper if you discovered his lyric sheets for Six in written form. The music that these emotions are set to serves to both reinforce and off-set their starkness, so you’re never entirely sure whether Draper and Mansun are to be taken seriously.

Opening with the labyrinthine, multi-segmented eight-minute title track (which was mysteriously selected for a fourth single in brutally edited form), the album presents itself in the kind of structure reminiscent of bloated early ‘70s prog-rock concept LPs. Despite being a CD-only release, its tracklisting is split into two parts, with a spoken-word interlude in the middle.

In both musical and thematic terms, the album takes no prisoners right from the very beginning. The opening verse of ‘Six’ is a crippling dissection of self-loathing featuring the lyrics “did you see the way I cowered to authority” and “my life is a series of compromises anyway / it’s a sham and I’m conditioned to accept it all”. Such self-directed lyrical barbs are par for the course virtually for the entire record, with almost all business being conducted in the first person. ‘Negative’ is an unflinching analysis of social anxiety and depression (“my future’s looking positive / nobody even picked on me today”), while ‘Shotgun’, referencing Confucianism, Buddhism, vinegar tasters and Winnie The Pooh all in the same song, is completely bonkers.

From there, side one settles into a continuous four-song suite in the manner of the second half of Abbey Road, and is arguably Six’s most ambitious moment. All its mini-tracks meld together seamlessly despite being cut from very different cloth, from the bare-bones piano of ‘Inverse Midas’ to the bizarre ‘Fall Out’, which opens with a sample of Tchaikovsky’s ‘Dance of the Sugar Plum Fairy’. The first section of Six closes with ‘Cancer’, featuring a hulking, almost doom-metal like chug in its mid-section split up by an almost doo-wop singalong with tongue-in-cheek lyrics like “I’m emotionally raped by Jesus”.

Rather than offering a respite from the onslaught of ideas, which tumble out so fast that both Mansun and the listener barely have time to explore them before moving on, the brief interlude ‘Witness To A Murder (pt.2)’ is possibly the most terrifying track on Six, bundling all of the album’s neuroses together in one place for a desperately sad meditation on mental disorder and depression narrated by former ‘Doctor Who’ actor Tom Baker. “All my life, what I mistook for friendly pats on the back were really the hands that pushed me further and further down / The more I struggle, the less I achieve”, Baker intones balefully over a harpsichord backdrop that makes you shudder.

Thankfully, that suffocating atmosphere lets off throughout most of the second section of Six, which is dedicated to four lengthier, sparser and prog-rock structured epics. The hopeless alienation of ‘Television’ essays life with obsessive-compulsive disorder and insomnia, while ‘Special / Blown It (delete as appropriate)’ revisits the themes of ‘Negative’, this time from the perspective of how the protagonists’ violently changeable mood-swings affect his outlook from optimism to sudden pessimism (“blown my chances in a tragic flurry of apathy”). In these tracks, Mansun actually take their time to let the songs unravel at a more traditional pace, and it makes for a less head-spinning experience.

Six then finishes with two of its strongest tracks, with each displaying rather different qualities. ‘Legacy’, which ended up being Mansun’s highest-charting hit when it reached no.7 as the album’s lead single, is a contender for one of the bleakest UK Top Ten hits ever. Its gloomy, slate-grey guitar riff. “all relationships are empty and temporary”, goes the bridge, and its coda is a repeated mantra of “nobody cares when you’re gone”. It’s the sound of despair written large, yet manages to be anthemic in spite of its sense of complete defeat. That’s followed by the prog-power-punk mash-up of closer ‘Being A Girl’, which somehow became a Top 20 hit, is one of Six’s greatest outliers, even in an album full of strange moments. Draper boldly attempts to write from a feminine perspective while critiquing consumer society (“I judge myself by the adverts I see”) and does so largely successfully, something incredibly rare in the male-dominated British guitar scene twenty years ago.

Throughout, Paul Draper’s emotional, keening vocal delivery dovetails with lead guitarist Dominic Chad’s art-rock melodies and innovative soloing. Mansun’s rhythm section, of bassist Stove King and drummer Andie Rathbone, are laid down a challenge to simply keep up with all of this, and it leads to some wonderfully neurotic and completely out-there moments as well as some almost operatically emotional ones. Six is an artistic tight-rope walk, in which Mansun are constantly almost falling off either side, risking being comically over-blown or unbearably navel-gazing at any given time. That they (mostly) don’t is an achievement, and the struggle is consistently compelling as a listening experience.

Six’s legacy (excuse the pun) is both limited and difficult to gauge, purely because so very few British bands subsequently have attempted anything even remotely like it. Only reaching no.6 in the UK Albums Chart (appropriately!), many felt that Mansun had committed commercial suicide. It didn’t even get released in the States until virtually a full year afterwards, and even then, its tracklisting was significantly butchered and altered from the original release.

While it may have lost them some of their fans, and baffled a fair few critics in the process, those who reacted well to Six tended to be extremely effusive in their praise. Melody Maker was just one such example, describing it as being as advanced from Mansun’s debut Attack Of The Grey Lantern “as the personal computer does from the abacus.”

That’s a slightly unfair comparison – while their debut probably scans as the better album two decades on, it’s Six that’s by far the more interesting. Mansun manage more ideas in 70 minutes than many bands do in their lifetime. As the world pivots ever more inexorably into social media-fuelled chaos, atomisation and individual alienation and loneliness, Six becomes more relevant with each passing year, as many of the anxieties and worries it describes have become more widely discussed. It’s up there with Radiohead’s dystopian OK Computer and the aforementioned The Holy Bible as one of the densest and most rewarding records of the Nineties, and alongside Lou Reed’s legendarily morose Berlin as of the most discomfiting listens in the annals of popular music.

Listen to Six by Mansun here via Spotify, and tell us what you think below!