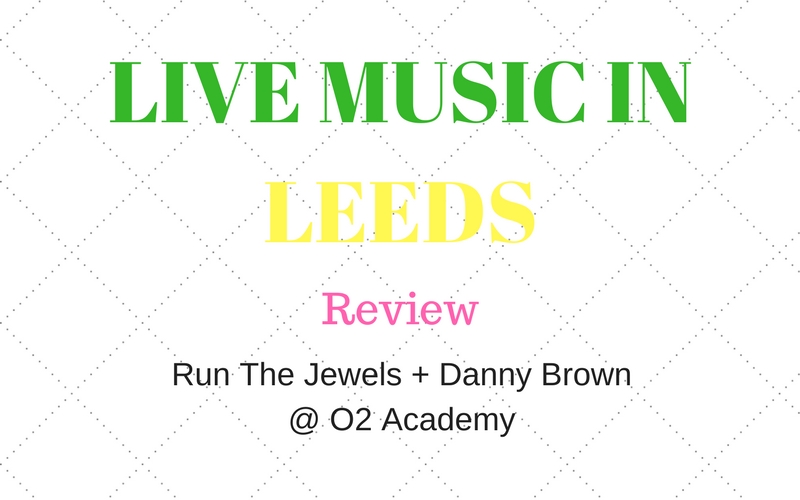 One of the most impeccably cool British tours of the year rolled through Leeds on Wednesday night. Constituting two of the most critically acclaimed names in hip-hop in recent times, Run The Jewels and Danny Brown on the same evening is a seriously appealing draw for any clued-up fan of music in 2017.

Playing a 45-minute set packed with choice cuts from his last three records, including last year’s superb Atrocity Exhibition, this is so much more than an average support set. The huge queues and lugubrious security processes outside just ten minutes before Brown’s set suggest that the O2 Academy was not quite prepared for the demand so early on in the night, and the venue is nearly completely full by 8pm. Walking on stage to Black Sabbath’s ‘Iron Man’, Brown gets an absolutely stupendous reception with choice cuts like ‘Really Doe’ slaying the crowd.

The energy and engagement of Danny Brown’s set on its own would be enough to satisfy most people for an evening out, but the stage-hands setting up the inflatable trademark ‘RTJ’ hands remind the crowd that it’s time for one of the most celebrated hip-hop acts of the last five years to take the stage.

Having been on the road for virtually the whole of 2017 in support of Run The Jewels 3, and on the home straight before they enjoy a break for the festive period, it’s remarkable how much pumped-up energy and fun-starting enthusiasm that Killer Mike and El-P exude. Not just roaring out of the traps, but from start to finish, Run The Jewels are one of the most joyous acts this reviewer has seen in ages, in terms of sheer entertainment value.

16 tracks in just over 75 minutes absolutely fly past in hurricane of ribcage-shaking beats, razor-sharp rhymes and clangorous sampling. Opening trio ‘Talk To Me’, ‘Legend Has It’ and ‘Call Ticketron’ connect like a boxer’s combination of punches, as the clear majority of their set is taken from their newest album. ‘Nobody Speak’, their stand-alone single they made with DJ Shadow, gets dropped and the entire place goes nuts, as does Run The Jewels 2 highlight ‘Close Your Eyes (And Count To Fuck)’.

The excitable El-P regularly chats with the crowd between tracks, his natural enthusiasm for performing obvious from a mile away and helps those of us not throwing ourselves around the moshpit – I’m too old for that shit, okay! – to get more connected with the set.

But if ever a man belonged on the stage, it’s Killer Mike. Striding authoritatively and flashing his playful smile pretty much non-stop throughout the gig, whether it be meeting the glances of his bandmate or the dedicated moshers being hauled over the security barriers down the front, the guy is a magnetic and friendly presence throughout. Giving an impassioned speech about looking out for each other and helping each through bad times before set-closer ‘Down’, Mike is the true star of the band.

Best of all, El-P humbly thanks the thunderously applauding crowd and promises they’ll be back “even stronger, even harder” for Run The Jewels 4 – whenever it appears. After enjoying a well-earned break, it can’t come out quickly enough.