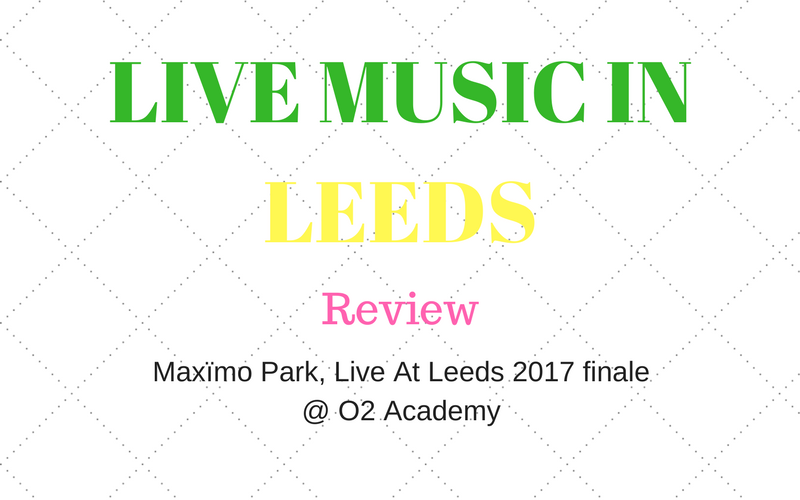 Twelve years on from their 2005 debut album A Certain Trigger, a record which seized the fleeting zeitgeist for post-punk revivalism and combined it with an intellectualism not particularly seen in the British guitar scene in the noughties, it’s impossible not to admire Maxïmo Park’s survival into 2017 when so many of their contemporaries have split, dropped off the radar or whose creativity has long since abandoned them. Razorlight were always a joke and eventually got called on it, The Futureheads have long since vanished without trace, and Bloc Party are a tragic shadow of the formidable force they used to be, but Paul Smith and his hardy band of brothers have weathered the huge upheavals of the industry and the vagaries of fashion, remaining as intelligent and cryptic as ever.

With their recently released sixth album, Risk To Exist, sitting at rather impressive no.11 in the UK Albums Chart, a headline slot at the showcase finale for 2017’s Live At Leeds festival, coinciding with their current tour, is a chance for Maxïmo Park to show a different generation what they’re made of. Tonight’s crowd seems to be a fairly respectable mix of newcomers to the band, who’ve added on Sunday night’s gig as an extra to their wristbands for Saturday’s proper LAL extravaganza, and old-school fans in their late twenties and early thirties. A dutiful support bill of four acts includes The Indigo Project and High Tyde, the retro indie kicks of Spector and an enjoyable set from fellow survivors Little Comets.

Taking to the stage at virtually precisely 9:35pm as advertised, Maxïmo Park rattle through a combined set of new album tracks, selected discography highlights and old hit singles, whose sonic variety yet consistent cerebral power explains the band’s longevity. Risk To Exist is given a thorough airing, with the title track, ‘Alchemy’ and ‘What Equals Love?’ in particular settling in nicely alongside established crowd pleasers.

Throughout, the fedora-wearing Paul Smith’s lively, engaging performance is mesmerising and helps the group over the occasional mid-set lull where they play perhaps too many new songs in a row. At the age of 38, Smith is no spring chicken any more, making his scissor-kicks and fast, ironic poses all the more impressive as he attempts to physically live out his songs on stage.

At least one track from all five of their previous albums is represented in a 19-song set; even 2009’s comparatively unloved Quicken The Heart is plundered for the pleasurable ‘Questing, Not Coasting’, and 2012’s The National Health gets a lot of attention. Reliable sing-alongs come in the shape of ‘Our Velocity’ (Maxïmo’s only Top 10 hit), ‘Books From Boxes’ and A Certain Trigger’s hit singles ‘Going Missing’ and ‘Apply Some Pressure’ in the encore.

However, Maxïmo Park sign off with their current single, the call-to-consciousness of ‘Get High (No I Don’t)’, which is how it should be for a band who are clearly much more interested in living in the present and looking to the future than reminiscing on past glories or playing old records from start to finish. It’s comforting to know that there’s still passionate, literate groups out there doing it the old-fashioned way. Here’s to 12 more years.

PREVIEW: Gigs of the Week in Leeds, 7th-13th December

PREVIEW: Gigs of the Week in Leeds, 30th November-6th December

The best live music coming up in Leeds this week,…