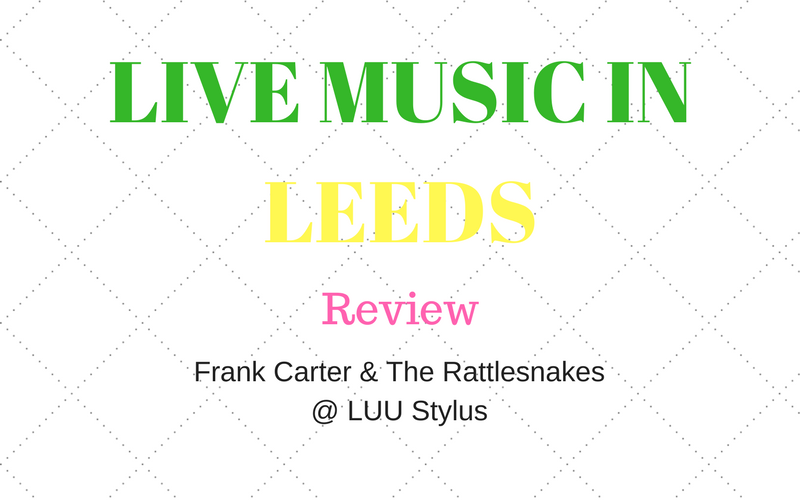 Before we get into the details of the night, let’s shine a very bold light on a statement made by Frank Carter himself – “This is probably the best gig I’ve ever played”. Perhaps I should just leave this review of Friday’s Rattlesnakes gig there; but let’s explore why this statement is not as far-fetched as one might think.

The first act Strange Bones provided a taste of what the audience would expect from the headliners: dynamic performance, thrashing guitars, headbanging drum-beats and, of course, crowd-surfing from the vocalist. After this, Yonaka was next to take to stage. Their music certainly has a darker agenda with enough alt rock riffery to maintain the audience’s attention before the main event. This was mainly achieved by vocalist Theresa Jarvis, who’s characterful and intriguing dance movements worked wonders with the music, and the scintillating effects coming out of George Edward’s guitar.

So, we’ve discussed the starters; now onto the main course – Frank Carter & The Rattlesnakes. The second ‘Snake Eyes’ started playing, the middle of the floor went utterly bezerk – as though a time bomb had gone off! Subsequently, fan-favourites ‘Trouble’ and ‘Juggernaut’ followed pursuit. It was at this point that the band members were glistening from the sweat and the body heat radiation levels in the crowd had reached zenith proportions. It was during ‘Modern Ruin’ that Carter wanted all the female members of the audience to crowd-surf throughout; wanting them to have fun in a “safe and positive environment”. It’s something seldom-seen and it was somewhat hilarious.

On a few occasions, Carter would leap into the crowd and did so with guitarist Dean Richardson on the penultimate song ‘Paradise’. The song ‘Neon Rust’ is where the audience could relax for five minutes as they fixated on Carter’s hypnotizing ballad vocals. During ‘Bluebelle’, Carter had let the cat out of the bag about his behind-the-scenes guitar lessons to which he amusingly described himself as “the worst guitar player in the room”. No matter, what he may lack as a guitarist, he more than made up for on ‘Lullaby’ where the band were switched back on to hysteria mode.

It was after ‘Devil Inside Me’ that Carter made the statement at the start of this review. The band were having such a good time, the audience were treated to an extra song – ‘Paradise’. Then in classic Rattlesnakes fashion, the setlist ended with ‘I Hate You’; where Carter barely had to sing as the chanting crowd needed no help. Overall, the show experience was exceptional and overwhelming. What made it so was Carter’s profound and natural charisma that he seems to discharge endlessly; but, of course, he couldn’t have done it without the four other talented band members also present on stage.

PREVIEW: Gigs of the Week in Leeds, 7th-13th December

PREVIEW: Gigs of the Week in Leeds, 30th November-6th December

The best live music coming up in Leeds this week,…

PREVIEW: Gigs of the Week in Leeds, 23rd-30th November