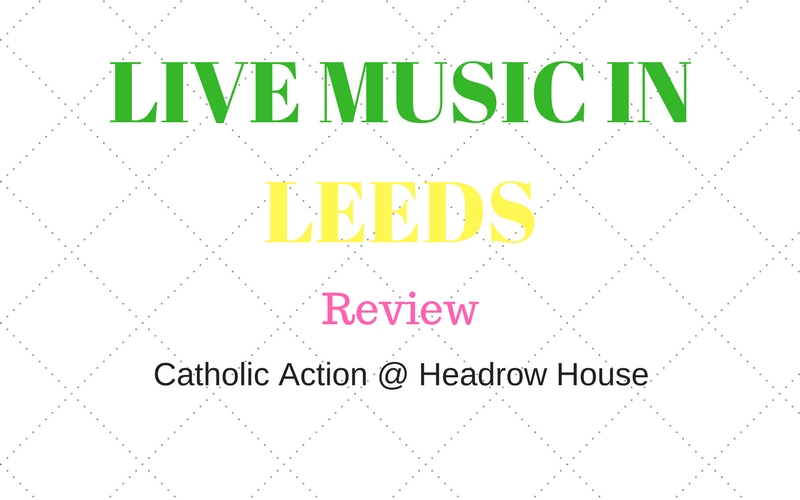 Although performing live is nothing new to Catholic Action, it is the first time in their career that the band is touring to promote a full-length album. That debut, In Memory Of, turned out to be a lively and well-balanced record, with just enough post-punk edge to balance the pop influences which snuck into their songs.

On the night of the gig at Headrow House in Leeds, a double header with Nottingham’s Kagoule, Catholic Action played a short and concentrated set of some of their best tunes, including ‘Rita Ora’, ‘Doing Well’ and ‘L.U.V.’. It is fair to say that during their performance, the music spoke for itself, proving that the Glasgow-based quartet is fully capable of delivering their material in a live setting.

Those who attended the concert are almost certain to have left it with at least one Catholic Action song stuck in their heads (‘Doing Well’ in my case). Outside of the recording studio the band sounded incredibly vibrant and carried the energy in an effortless way.

It was a pleasure to see how confident Chris McCrory, Ryan Clark, Jamie Dubber and Andrew Macpherson feel about their music, especially when playing in a small and intimate venue. McCrory’s vocals sounded crisp and charismatic on top of the electrifying guitars and percussion, which might as well have stolen the show. At the same time, each of the instruments received their own time in the spotlight which refletected the energy of the band.

The only negative thing which can be said about is that it ended too quickly. It seemed like the band was just about to switch to a higher gear, when they swiftly disappeared from the stage. Nevertheless, it was fun while it lasted, and there is definitely more to look out for from Catholic Action in the future. (Alicja Rutkowska)