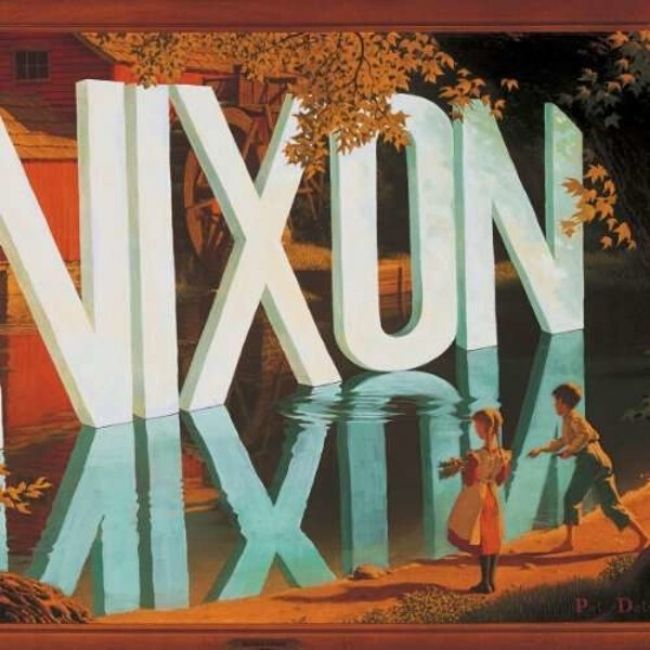 In the face of the commercially lucrative garage-rock revival and the continuing reign of nu-metal that dominated what we were increasingly being compelled to call ‘alternative rock’ at the turn of the millennium, one particularly splendid album that ticked neither box passed quietly under the mainstream radar when released a few days in to February 2000. Nixon, the fifth studio album by Nashville-based band Lambchop, stood quietly and magnificently apart from prevailing trends and established them as one of America’s most acclaimed independent rock acts, a reputation that remains twenty years later.

While nominally rooted in the alternative rock scene and taking cues from country, in a style that eventually earned the broad journalistic shorthand ‘countrypolitan’, the band’s music has slowly shifted over the years and pivoted to encompass influences of soul, post-rock and lounge at the behest of their founder and sole constant member, singer Kurt Wagner. In fact, it’s always worked against Lambchop that they’ve been pigeonholed as ‘country’ – their music is far less populist than conventional country music, shyer and more self-deprecating, not given to grandstanding. But the connection to the music of their hometown of Nashville is nevertheless there, insofar as Wagner finds his muse in the old-fashioned, the derelict and forgotten. This was an art that he absolutely perfected with Nixon.

Releasing their first album as Lambchop back in 1994, but with a previous life as Posterchild dating the group even further back to 1986, Wagner was already an old hand by the time that Nixon was released. Named cryptically after the disgraced former US president, for which no overarching concept is immediately apparent in the music despite a recommended reading list concerning old Tricky Dick himself in the liner notes, Nixon is near-peerless masterclass in the art of understatement.

Beginning with the softly brushed snare drums and shuffling bass and guitars of ‘The Old Gold Shoe’, a shimmering hybrid of chamber-pop and country that feels like the imaginary soundtrack to some grand, dusty and deserted ballroom from a different age, Nixon allures and coaxes the listener into its charms without forcing itself on you. ‘Nashville Parent’ is like something from a prime-time Isaac Hayes album, a lavish yet sparsely arranged piece featuring emotional heaves and swells reminiscent of Seventies soul, while ‘The Book I Haven’t Read’ (which contains a writing credit for Curtis Mayfield) features skyscraping strings that carry the melody and harmony.

Wagner’s lyrics are observational and casually descriptive, delivered in a quiet half-sung, half-spoken style that perfectly complements the music in which it’s embedded. Expressed though character studies, of nuisance neighbours, gangs of kids and gentle afternoons on porches – the most beautiful of which is the pining lap-steel guitar that underpins ‘The Distance From Her To There’ – Wagner and Lambchop paint a lightly surrealist and occasionally humorous portrait of southern American life, projecting mystery onto the mundane and using them as springboards for brief flights of fancy and concluding that, despite the many things wrong with it and the people who populate it, the world is a pretty great place.

The beatific, radiant single ‘Up With People’ underscores that conclusion, and is also about as lively as Nixon gets. Powering gently yet inexorably along with its rolling bassline and muted handclaps, its wonderfully warm blasts of horns and gospel choir backdrop echo Wagner’s ambiguous worldview, with the cleverly split line “we are screwing / up our lives today” nailing the point.

While it failed to make much impression in their homeland, Nixon was hailed in the British press and found a small but dedicated audience. Lambchop sold out the 2,500-capacity Royal Festival Hall the following year, and Zero 7’s blissed-out remix of ‘Up With People’ even registered in the lower end of the UK Singles Chart. Kurt Wagner has never quite hit the same heights since, taking an abrupt left-turn with 2002’s austere follow-up Is A Woman, but Lambchop have frequently released works of similar beauty and depth, most recently 2016’s FLOTUS and last year’s This (Is What I Wanted To Tell You). However, when you’ve released an album as confounding yet paradoxically complete and understated as Nixon, you earn the right to mess around with audience’s expectations. While it didn’t fit in with any contemporary rock narrative, it’s exactly the kind of timeless art that is always worthy of attention.

Listen to Nixon by Lambchop here via Spotify, and tell us what you think below!