CULT ’60s: King Crimson – ‘In The Court Of The Crimson King’ 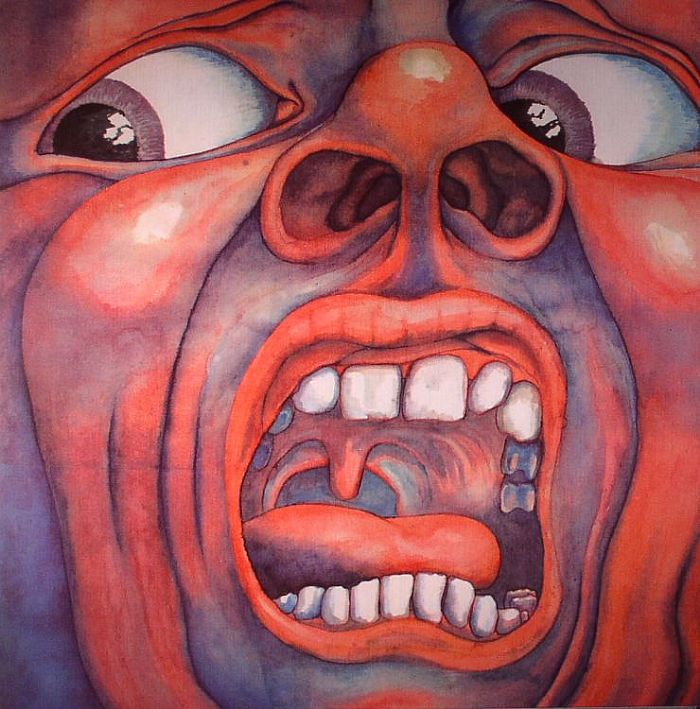 Progressive rock, or ‘prog rock’, has consistently had something of a tainted reputation in the world of music criticism ever since the punk revolution in the late Seventies, forever associated (rightly or wrongly) with impenetrable, willfully difficult compositions, pompous egos and massively expensive instruments. But for every bloated double-LP of noodling self-indulgence, or triple-LP concept album about the agrarian revolution, even the smallest amount of research demonstrates at least one brilliant example of what this kind of experimental, abstract and highly technical music could sound like, in the right hands. Possibly the first ever truly great album in this vein was In The Court Of The Crimson King, the debut album from King Crimson that was released right at the end of the Sixties, but which would inform a great deal of what was to come in the following decade.

The Sixties was a decade in which not only the sound of pop and rock music had evolved at lightning speed, but also the very idea of what it could describe, what it could be about, and what forms it could take. After the Summer of Love of 1967 and the release of psychedelic masterworks like Sgt. Pepper’s… and The Piper At The Gates Of Dawn, pop was never going to completely revert back to its previous state of three-minute hits, and a number of British and American rock musicians wanted to push the art form as far as it would go. King Crimson, a London-based five-piece formed at the end of the Sixties, were probably the most prominent of these.

The group’s ascent and impact was almost immediate, enjoying the early exposure of performing in front of 500,000 rock fans on 5th July 1969 supporting The Rolling Stones at an enormous free concert in London’s Hyde Park. Formed from the ashes of an unsuccessful psychedelic pop act consisting of bassist Peter Giles, drummer Michael Giles and guitarist / de facto leader Robert Fripp, the first (and classic) five-piece line-up of King Crimson came together by the end of 1968 when Fripp ejected Peter Giles for Greg Lake on bass and vocals, and added lyricist Peter Sinfield and keyboardist / multi-instrumentalist Ian McDonald. Their name was chosen to make a political point – historically and etymologically, a ‘crimson king’ referred to a monarch during whose reign there was civil unrest and copious bloodshed – and the dark and unsettled mood of their debut album reflected that.

Upon release, In The Court Of The Crimson King was hailed as a masterpiece, from critics and fellow musicians alike – most notably Pete Townshend, whose own conceptually groundbreaking album with The Who, Tommy, was released earlier the same year. In contrast to the blues-based and/or psychedelic rock approach favoured by many of their contemporaries, King Crimson blended these influences with a more Europeanised approach, one that took in classical forms and structures, both romantic and modernist, and freeform jazz experimentation. Robert Fripp would be the mainstay of King Crimson for years to come, dominating the group’s sound and direction amid an array of different line-ups, but on this record, he shares equal billing with his bandmates, with Ian McDonald’s imagery and woodwind sections arguably the star element.

The themes of madness, unreality and apocalypse of In The Court Of The Crimson King are established even before you’ve pressed play. The album’s arresting artwork – best enjoyed on the vinyl album’s gatefold sleeve – is a painting by computer programmer Barry Godber of the character in the record’s opening track ‘21st Century Schizoid Man’. Madness, fear and despair seem to be in the man’s expression, and the message it communicates is clear – listen if you dare, because too much In The Court Of The Crimson King might send you mad as well. Robert Fripp himself later said “the eyes reveal an incredible sadness. What can one add? It reflects the music.”

Opening with a steady, ominous rock riff, those same themes of internal and societal chaos are expressed in Ian McDonald’s series of disconnected images. “Death seed blind man’s greed / Poets starving, children bleed / Nothing he’s got he really needs”, Lake sings in a heavily distorted voice, the lyrics interspersed with saxophone squalls, jazz freakouts and stuttering drums. Not only is ‘21st Century Schizoid Man’ credited with influencing the alternative rock and grunge sounds of the early Nineties, but Kanye West was so enamoured with it that he sampled the vocal line for ‘Power’ from his 2010 masterpiece My Beautiful Dark Twisted Fantasy.

This is followed by the least unsettling track of the album – or, at least, superficially. Although it’s set to pastoral wind instruments, beautiful flutes and soft, pattering drumming, Lake’s lyrics in ‘I Talk To The Wind’ speak of complete futility and crushing alienation. “I’m on the outside / looking inside… I talk to the wind / But the wind cannot hear” he croons plaintively. ‘Epitaph’ strikes a similar note of resignation, although its execution seems to frame Lake’s disposition as something more virtuous than it was on the previous track, despite him singing McDonald’s lyrics predicting of a time when “the silence drowns the screams”. The mellotron sound is toned down on these tracks compared to the totemic power of their early live shows, but the album doesn’t suffer from this, instead living gaps for Fripp’s inventive blasts of guitar and Lake’s strongest vocal work ever.

The spooky yet utterly beautiful ‘Moonchild’ opens the second side, a 12-minute epic that contains an improvised, ambient jazz interlude after an acoustic, folk-based ditty. Unlike the two famous tracks that bookend In The Court Of The Crimson King, ‘Moonchild’ is the quietest and most reflective moment, and one that was given a second life in the 21st century when Doves re-moulded the melody for ‘M62 Song’, on their chart-topping 2002 album The Last Broadcast.

Like all great conceptual works, In The Court Of The Crimson King saves its most epic and bombastic moment for the end. Featuring majestic drum rolls and with its lyrics speaking of fire witches, purple pipers and lullabies in ancient tongues based around a symphonic riff, the album’s title track manages to sound both grandiose and deeply depressed at the same time. The shifting time signatures, and the folky arabesques and baroque flute that characterise the track’s middle section, are all brilliant examples of what progressive rock could be at its best. Even the pitched-up synthesisers in the song’s short coda seem to signify a collapse into madness. While an abridged version of the single stiffed in the UK, ‘In The Court Of The Crimson King’ did surprisingly well in America, where the full 10-minute running length was split over two sides of a 45-rpm disc.

Anyone who heard In The Court Of The Crimson King at the time was astonished by the group’s highly original approach, and 50 years later it’s among the most daring and ambitious debut albums ever conceived. It blew every other band in their fledgling genre out of the water, including commercially successful acts like The Moody Blues, and in many ways became an albatross for King Crimson themselves. This line-up would not stay together much longer, with Greg Lake, Michael Giles and Ian McDonald all quitting or being pushed out during the subsequent touring period as Robert Fripp assumed creative control of the group. It took them five years and as many albums to make something half as resonant as their debut, however, with 1973’s freeform Larks’ Tongues In Aspic being the best.

A version of King Crimson headed up by Fripp still tours today, although the group hasn’t recorded any new material since 2003. Their influence isn’t contained to the progressive rock genre, however, with artists as diverse as Kasabian and Kamasi Washington owing a debt to their fusion of rock with more classical and avant-garde (or at least non-blues) forms. Half a century later, In The Court Of The Crimson King is the cornerstone of that lasting legacy, still retaining its unsettling and startling power for newcomers today.

Listen to In The Court Of The Crimson King by King Crimson here via Spotify, and tell us what you think below!

Continue reading...
1 Discussion on “CULT ’60s: King Crimson – ‘In The Court Of The Crimson King’”